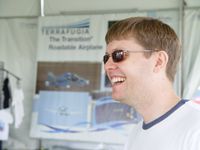 Roadable aircraft developer Terrafugia is suggesting production and delivery of the device may come later rather than sooner. In a carefully worded news release on Tuesday, the Massachusetts company said it might have to build a third prototype based on the testing it has done so far on the second machine. “Once the engineering team is satisfied that the majority of the field issues have been identified from this prototype, we will evaluate if the number and magnitude of potential modifications warrant the construction of another prototype prior to final compliance testing for certification,” the company said. The video, shot in late October, shows an aircraft that appears to have significantly better handling characteristics than the first prototype (we think it looks better, too) and Terrafugia says they continue to make improvements, hence the possibility of a third prototype.

Meanwhile, the company says it’s wringing out the current test article, “actively flight testing and drive testing to evaluate the durability of the Transition airframe in real-world environments.” Terrafugia also has a seat at the FAA’s review of Part 23 certification rules and says it may have something to say about that soon. “These new developments have led Terrafugia to initiate a new internal program which we look forward to announcing at the appropriate time,” says the carrot left dangling in the news release. The current program is geared to a Light Sport designation for the folding-wing aircraft.