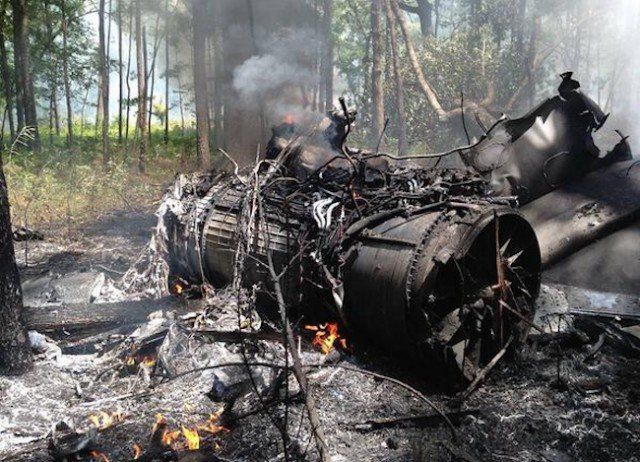 A father and son aboard a Cessna 150 were killed when their aircraft was reportedly “broadsided” by an Air Force F-16 over Moncks Corner, South Carolina, on Tuesday. The F-16 pilot, Maj. Aaron Johnson, ejected and was not hurt. The jet crashed in a wooded area and nobody on the ground was hurt. The NTSB is examining both crash sites and on Wednesday identified Joseph Johnson, 30, as the pilot of the Cessna, and his father Michael Johnson, 68, as his passenger. Crews were still searching Wednesday for Joseph Johnson’s body, according to an Associated Press report. The fighter was based at Shaw AFB in Sumter. The jet was on a training mission practicing instrument approaches to Charleston International Airport, which shares the field with Charleston Air Force Base.

InvestigatorDennis Diaz told The AP that the F-16 “was able to fly in some fashion for a period of time after the accident, which is why we have an aircraft site that’s separated by about 10 miles.” The fighterwas under “positive control” by air traffic control Col. Stephen Jost, commander of the 20th Fighter Squadron told a news conference. The Cessna had just taken off from Berkely County Airport, a non towered airport about 17 miles northwest of Charleston, The Cessna was headed for Myrtle Beach and the collision occurred between 2,000 and 3,000 feet. Jost said the 20,000-pound F-16 would have been going between 230 and 290 mph at the time.

The Cessna was smashed to small pieces by the impact and debris rained down over an eight mile area about 20 miles northwest of Charleston. There were no reports of injury or damage on the ground. Weather was overcast but Jost told a news conference he didn’t believe weather was a factor. The F-16 left a crater and smashed trees in the woods surrounding the historic Lewisfield Plantation. Workers at the plantation found the pilot and took him to ambulance personnel who drove him to the base, where he was being kept for observation.