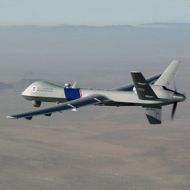 As unmanned aerial vehicles inevitably find their way into the National Airspace System, both the FAA and other airspace users worry that these remotely piloted aircraft can’t see other traffic the way a human pilot can. The reality, says the Air Force, is that the current generation of UAVs may be able to see traffic better than a human pilots because of sophisticated sensors that operate in both the visual and infrared spectrums. Recall that in a previous story, we reported that the Air Force and FAA are jousting over how best to fit UAVs into the airspace system, especially in North Dakota, where the service has six Predators stationed awaiting deployment for training. The Air Force proposed a 35- by 45-mile restricted area in which to operate the drones, but the FAA has pushed back against the airspace grab, arguing for more deliberation. Brig. General Leon Rice told AVweb that the Air Force actually doesn’t favor a restricted area as a means of integrating UAVs into the airspace, but would like to eventually move to a more normal “file-and-fly” stance, something the FAA isn’t ready to approve. Specially designated UAV MOAs are also on the table. Rice says that those who worry about the see-and-avoid issue may not know that the current generation of UAVs have two sensor balls, one for ground scanning and one for scanning the airspace. Each has a dedicated human operator.

These sensors are capable of resolving targets in great detail out to five miles and they can determine range and vector in order to initiate avoidance maneuvers. What’s not in place yet, Rice said, is the data and procedures the services need to support onboard, visually-based see-and-avoid by UAV operators. But Rice believes this will be possible within two to five years and that drones will be fully integrated into the NAS for normal operations in about 10 years. The UAVs were placed in North Dakota by order of Congress, Rice told us. Other more remote bases with generous restricted areas, such as Nevada’s Nellis Air Force Basis, are at or near saturation for UAV training.