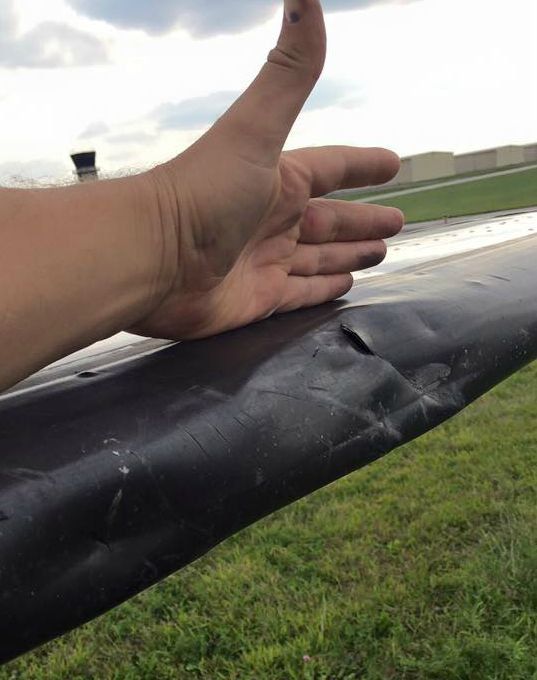 The FAA has reported that an “unknown object” struck a Piper Apache while in flight near Romeoville, Illinois, but according to the drone website suasnews.com, that object was likely a small drone. Citing an “unconfirmed report,” suasnews states that a Piper PA-23 twin impacted the drone at about 2,500 feet near Lewis University Airport (KLOT) in Illinois on Aug. 27. Photos of damage on the aircraft appear to show a series of vertical indentations and a slice into the rubber de-ice boot along the leading edge of the tail surface. The airplane landed safely and nobody was hurt. Kathryn Skonicki, a spokesperson for Lewis University, which offers a bachelor’s degree in unmanned aircraft systems, told AVweb on Wednesday their school was not involved in the incident. “Safety is a priority for us,” she said. “Due to our proximity to the airport, all of our unmanned aircraft systems are flown indoors.”

Chris Lawson, director of the airport, told AVweb in an email that he heard about the reported incident over the Internet. “The aircraft had no contact with our Unicom,” he said.Inquiries to the owner of the aircraft and the FAA so far haven’t turned up any additional details. According to suasnews, the only prior confirmed collision between a drone and an aircraft took place in Afghanistan in 2011. The FAA is continuing to work toward new rules, expected sometime next year, that will govern the activity of drones in the national airspace. On Wednesday, the FAA said it has put Earl Lawrence and Marke “Hoot” Gibson in charge of that effort. Lawrence previously directed the FAA Small Airplane Directorate for about five years, and prior to that, had been with EAA for about 15 years.