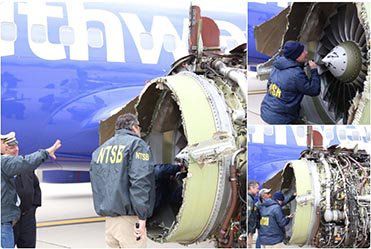 UPDATED: A female passenger was killed when an engine failed in flight aboard a Southwest Airlines 737 at 32,000 feet on Tuesday morning, sending shrapnel flying that broke a window and entered the cabin. The crew, en route from New York’s LaGuardia Airport to Dallas Love Field on Tuesday morning, diverted to Philadelphia and made a safe emergency landing about 11 a.m. CBS News has reported that the deceased passenger has been identified as Jennifer Riordan, a married mother of two, who worked as a Wells Fargo bank executive and lived in Albuquerque, New Mexico.

The Associated Press has reported that when the window broke, Riordan was pulled partly out the window by the sudden decompression, and was pulled back into the cabin by nearby passengers, but she was severely hurt. Seven others suffered minor injuries. The death is the first to occur due to an accident aboard a U.S. passenger airline since 2009. Tuesday evening, Southwest CEO Gary Kelly, in a video message posted on Twitter, said, “This is a sad day…I want to extend our deepest sympathies for the family and loved ones of our deceased customer.”

Southwest Airlines captain Tammie Jo Shults, 56, was in the cockpit during the emergency. Audio of the crew’s conversation with ATC (courtesy of ATClive.net) can be heard here. Passengers commended the crew for their cool-headed response. Shults walked through the aisle and talked with passengers to make sure they were okay after the plane touched down, the AP reported. “She has nerves of steel, that lady. I applaud her,” Alfred Tumlinson, of Corpus Christi, Texas, told the AP. “I’m going to send her a Christmas card, I’m going to tell you that, with a gift certificate for getting me on the ground. She was awesome.”

NTSB Chairman Robert Sumwalt held a brief news conference Tuesday afternoon in Washington before departing for Philadelphia. He said the engines on the 737 are the CFM56, which are very widely used. They are manufactured by CFM International, a 50/50 joint company owned by Safran Aircraft Engines and GE. Sumwalt said 144 passengers and five crew were on board the aircraft. Investigators will determine whether or not the engine experienced an “uncontained” failure, he said, which depends on what parts of the engine became detached. It was clear, however, that debris from the engine hit the window. This was reportedly the first fatality ever on a Southwest flight.

Tuesday evening, Sumwalt held a second briefing from Phildephia, and said a piece of the cowling from the damaged engine had been found on the ground in Pennsylvania, about 50 miles from the landing site. He also said a preliminary investigation of the engine showed that a fan blade had separated, and there appeared to be evidence of metal fatigue at the point of failure. An AD affecting the engine was issued about two years ago, but Sumwalt said his team has not yet determined if the accident engine was affected by it or if so, if the AD had been complied with. He said Southwest managment has already said they will begin enhanced inspection procedures for their engines, using advanced technologies beyond what is required.

“This should not happen,” Sumwalt said. He also said, in response to questions from the press, that he had not yet listened to the CVR but he had heard the ATC tapes and he felt the crew had done an “excellent job… my hat’s off to them.”