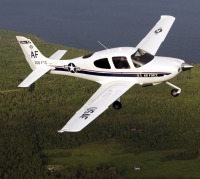 Cadets at the U.S. Air Force Academy in Colorado Springs soon will be training in the Cirrus SR20. The Air Force has ordered 25 of the airplanes, branded as the T-53A, Cirrus announced on Tuesday. “The T-53A meets or exceeds all of our performance and operational criteria and is very well-suited to our mission,” said Lt. Col. Brad Oliver, spokesman for the academy’s 557th Flying Training Squadron. “And, while we hope never to have need of it, our cadets and instructors will now have the option of pulling the chute if it’s needed.” The value of the purchase is about $6.1 million, Cirrus said. Deliveries started in June and will continue through next year. The Cirri will replace the current fleet of leased Diamond Aircraft DA40s. Diamond President Peter Maurer told AVweb he thinks the Air Force made a bad choice, for several reasons.

“I think that using ‘lowest cost technically acceptable’ as the selection criterion … without even a flight test evaluation, is simply not a good way to select an airplane,” Maurer said. He added that it’s a “waste of money” for the government to spend over $6 million to buy new airplanes, when it already has a fleet of two-year-old DA40s “that are technically better suited to the mission and have a perfect safety history to date.” Jon Dauplaise, Cirrus vice president of domestic sales, told The Grand Forks Herald the main attraction to the Air Force seemed to be the SR20’s sophisticated cockpit technology. “The reason we’re well-suited in the training market is because this will teach them to fly modern airplanes at a very early stage,” Dauplaise said.