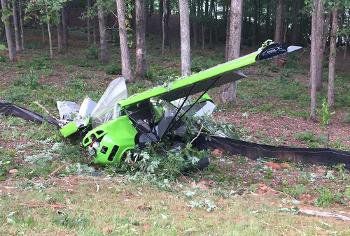 Just Aircraft says water in the fuel caused the loss of their demonstrator SuperSTOL aircraft on Aug. 2. Company founder Troy Woodland was at the controls when the aircraft went down shortly after takeoff at the company’s home base of Walhalla, South Carolina. Although the aircraft was destroyed, Woodland and his unidentified passenger were uninjured. In a news release, the company said the aircraft had been flown previously the same day and performed normally.

“Woodland had pre-flighted and flown the aircraft earlier in the day and added fuel just before takeoff,” the company said in a news release. “It was learned later that the fuel he added had water in it. Right after takeoff he experienced a serious reduction in power, then a brief surge, after which the engine died.” The accident hasn’t been posted on the NTSB database site yet. As the name suggests, the SuperSTOL is a lightweight kit airplane aimed at the backcountry market. It employs numerous lift and low-speed control enhancing features, including automatic leading edge slats and massive flaps and ailerons. It’s designed to handle a variety of engines in the 100-horsepower range. Paul Dye, editor of our sister publication KitPlanes, reviewed the airplane in 2013 in this video.