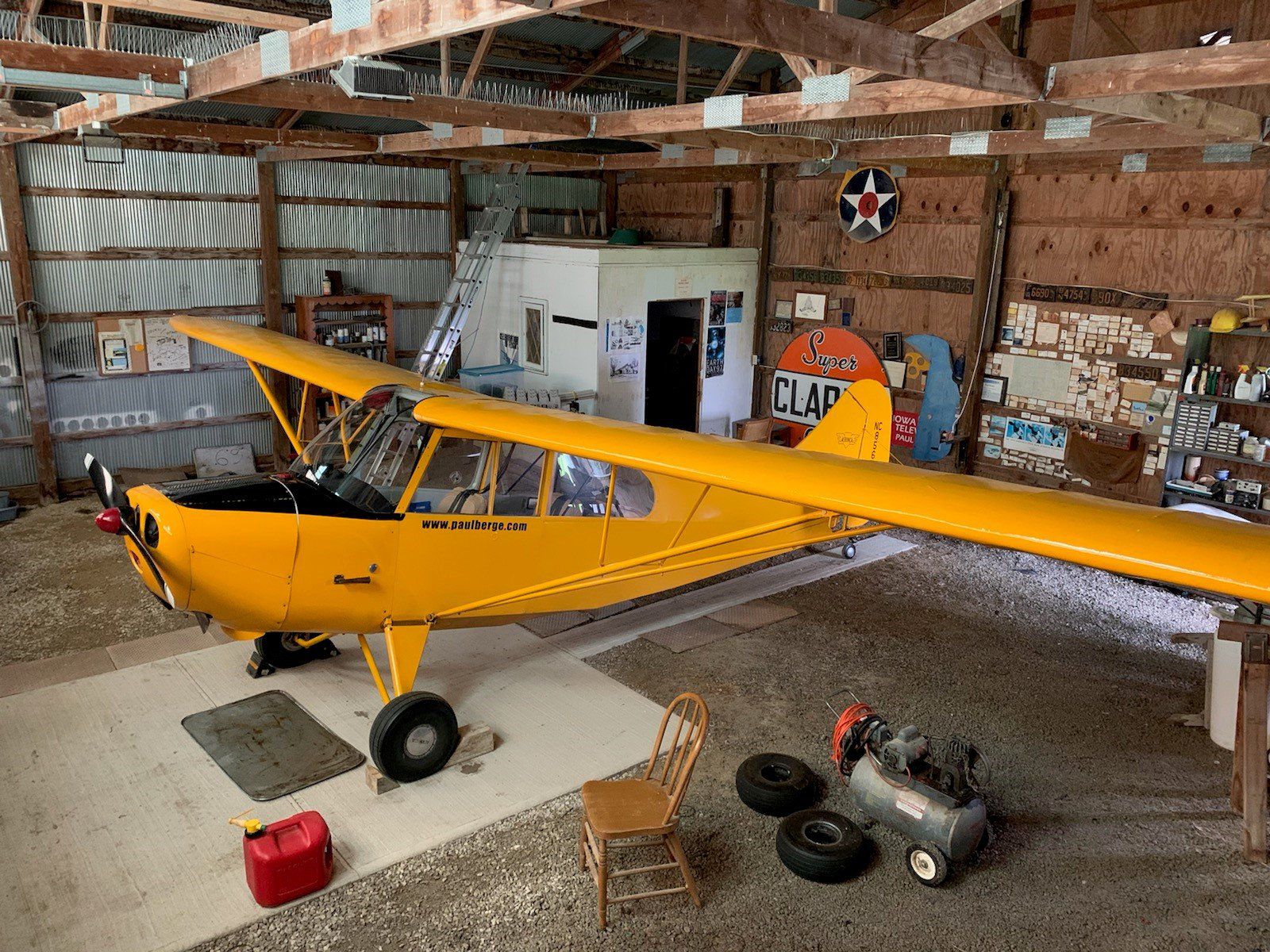 It’s difficult to share wistful reflections of my favorite coat hanger, but since it hangs inside my hangar, I suppose it has aeronautical cred. With that point about the most misused homonym in aviation properly bludgeoned, I now invite everyone into my hangar, a 42-foot 36-foot pole barn in central Iowa crammed with memories. Bring a jacket; there’s no heat but plenty of wasps in summer and mice year-round.

In 1984 my wife and I abandoned the Chardonnay glow of California where I was an air traffic controller at the most laid-back ATC facility in the FAA franchise. A place where winter and summer were indiscernible in coastal fog, and beautiful people flowed from Citations like melting gorgonzola. Monterey wasn’t the end of the rainbow but, instead, the refracted illusion itself.

Heading east in a reverse Steinbeck, we left behind airports where you could expect to hang on the hangar waiting list for 10 years. When scouting an Iowa airstrip, by contrast, I inquired about hangar availability, and the farmer replied with a Midwest understatement, normally reserved for presidential candidates, that implies you’re an idiot: “Just build yourself one.” So, I did, although, it remains a work-in-progress after 35 years. Like constructing a medieval cathedral, a proper hangar takes time and divine inspiration to create something greater than a storage bin for airplanes. But greatness should never be rushed, so whenever I feel the need to work on it, the divine says to go flying until that feeling subsides.

A hangar is more than the sum of its walls, floor and a leaky roof. It’s what we jam inside that establishes its character and possibly our own. Recently, I took inventory of the inspirational crap I’ve accumulated beneath the guano-streaked rafters while admiring the simple genius that is the structure itself.

The main door is 40 feet wide, a one-piece tribute to Edwardian-era engineering with cables, hand crank, counterweights and pulleys, requiring no electricity. It faces north, an admittedly poor choice when snow drifts against it, locking the airplane inside until spring, which arrives between March 15 and May 1 … maybe June. There’s a small westside door, now sun-bleached to chalky primer gray. We take security seriously here, so if you forget your hangar key, use the spare hidden above the door frame but remember to glance over both shoulders before retrieving it, so terrorists—or TSA—can’t overwhelm you and gain access to the 1946 Aeronca Champ inside … not that they would know how to hand-prop it … or fly a taildragger. The airport gate’s secret security code is—like most airports—the CTAF. Forgetting that, just walk around it. Don’t pet the dog. She doesn’t bite but does like to roll in things organic.

Once inside the hangar, flip the light switch, but until I replace the three bulbs, dead since 1998, allow time for your eyes to adjust to the semi-darkness. Take the opportunity to inhale the aroma of butyrate dope from leaking cans and listen to the wind rattle the steel siding, their ring-shank nails now so loose the building shudders and moans like Marley’s ghost in any wind over nine knots. And the wind is usually well over that here.

A counterclockwise scan reveals a work bench, where very little work occurs but does hold seemingly useless airplane parts. Eisemann magnetos, Stromberg carburetors and Continental cylinders so rusty they wouldn’t make decent door stops. All are right where I left them after the last overhaul. Inoperable flight instruments removed from every airplane I’ve owned—six so far—are lined up along metal shelves coated with the dusty residue of spent time.

Classic radios, such as my 90-channel Bayside, await the day when the digital world implodes, and the semaphore cry goes out for analog rescue. I’m prepared and so look forward to resurrecting the 1950 Lear Orienter ADF or the prize of my avionics retro-panel, the 1957 Narco Superhomer transceiver. Tricky getting vacuum tubes for these, but I have a source at Radio Shack with a private stash in the stockroom. This hangar is a living time capsule with ramparts that Huawei’s 5G tentacles can’t breach, provided I never get rid of any of this stuff. Midwesterners living outside city limits rarely throw anything away, and I’m well outside any perceived limits of time.

From the earliest cave drawings, walls have invited personal expression. Hangar walls invite staple guns, and three-and-a-half decades of moldering Aeroshell posters, aeronautical charts and fly-in promos are tacked to the water-stained plywood like deflated balloons from Gatsby’s last dinner party. One section displays business cards left by visitors from around the world who’ve passed through this hangar over the years. Each card is attached with a single staple, and most are now curled and fading, there as testimony to forgotten lives briefly touched by this building and its airplane.

I once encountered a municipal airport where soulless management decreed that nothing but operable aircraft could be stored inside its sterile hangars, and that once a flight was complete, the pilots shall immediately exit the premises through electric gates that bolster the mutually inclusive myths of threat and security. Heaven forfend pilots should linger inside their hangars to savor that sacred post-flight moment when the bugs are wiped from leading edges, and sunset waxes the most beautiful thing humans have ever created—a machine that flies. Top that, iPhone!

A hangar (not hanger) is a jewel case, and we should appreciate the sanctity of the structure in which aero-fantasy resides. “Otherwise,” to quote Edward R. Murrow completely out of context, “it’s nothing but wires and lights in a box.” Of course, in my case, the lights don’t work … but you get the point.