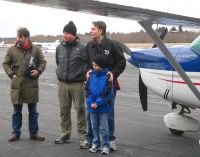 Aviation biofuel experiments took another step forward this weekend when a crew from the New Jersey-based Paramus Flying Club flew their Cessna 182 with an SMA diesel engine from Smithfield, R.I., to Kitty Hawk, N.C., on a blend of 50 percent biofuel and 50 percent Jet A. The biofuel, made by SkyNRG in the Netherlands, is refined from recycled cooking oil. “This was the first time this fuel has been used in a general aviation diesel engine,” Ross McCurdy, one of the pilots, told AVweb. Before taking off, McCurdy and Chris Howitt, president of the flying club, filled up the 182 on the ramp, and took it for a long run-up and a fast taxi. “If anything, the engine seemed to run better on the biofuel blend,” McCurdy said.

Howitt and McCurdy, along with flying club member Jochen Spengler and McCurdy’s nine-year-old son Aidan, made the 500-mile trip on Saturday and returned the next day. McCurdy said the engine ran just fine on the biofuel blend. McCurdy, who teaches high-school science in Rhode Island, hopes to take the biofuel airplane on a coast-to-coast flight, perhaps as soon as this summer. His students helped with research and planning of the weekend’s flight, he told AVweb, and will also be involved in the next phase.