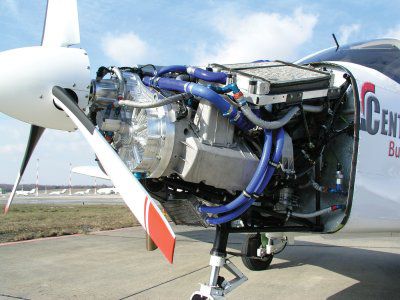 Continental Motors announced today that it has bought the bankrupt assets of Thielert Aircraft Engines for an undisclosed sum. The deal has been in the works for several months and overnight makes Continental the volume leader in aircraft diesel manufacture. Continental and its parent, the China-based AVIC International, said that the management of Thielert would be integrated into its Mobile, Ala., headquarters, but that diesel manufacturing will remain in Lichtenstein, where Thielert has been headquartered since it launched in 2002. Continental will drop the Thielert name, but retain Centurion as the model nameplate for its line of diesels. In addition to Thielert assets, Continental is ramping up production to build its own in-house diesel, the 230-hp TD300, the basic technology base it bought from the French company SMA in 2009. That engine was certified in 2012 and Continental will pursue both OEM and STC conversion markets. It has a production engine installed in a Cessna 182 and is continuing development on improved turbocharging.

The Thielert purchase gives Continental four engines across of a spectrum of horsepower. At the low end are the Centurion 135-hp 2.0 and 155-hp 2.0S, the mid-range 230-hp TD300 and the 350-hp Centurion 4.0, which was certified by Thielert but never fielded. European STCs exist for installations of the Centurion 4.0 in the Cirrus SR22 and the Cessna 206.

Continental CEO Rhett Ross told AVweb that once the purchase is complete, the company’s major emphasis will be to integrate-and improve-customer service and support and increase gearbox inspection intervals and engine TBRs or time between replacement on the Centurion core engines.

Thielert originally promised that the engines would reach a 2400-hour TBR by 2006, but the best the company ever managed was 1500 hours for the Centurion 2.0. Moreover, both of the four-cylinder Centurions were hobbled by 300-hour gearbox inspections that many owners considered to be an expensive nuisance.

Ross said Continental’s due diligence of the company revealed sufficient data to support longer TBRs and Thielert had already developed but never fielded a 600-hour gearbox. Although the Centurions ran into significant maintenance issues by 2007, what forced Thielert into bankruptcy was overbroad warranty protection that the company simply couldn’t sustain.

“When we looked at their data from their current experience and their life experience, it’s not bad. For what it is as a product and where it is in its cycle, it doesn’t scare me as a business leader,” Ross said of the Centurion line of engines. But he conceded Thielert had a deservedly poor reputation for customer service and customers have complained to AVweb that Thielert never built the service centers it promised. Continental will address this, said Ross, by bringing support for all of its engines into a common entity, so when a customer calls for support on any engine, the process will be transparent. Ross said that Continental once had its own customer service problems but invested time and money to improve. It intends to apply the same formula to its diesel line.

“We’re opening a company in China to provide service, sales and support. We’ve got people in training to start that right now,” Ross said.

Continental is clearly bullish on the market potential for diesel engines. Johnny Doo, Continental’s VP for business development, thinks that in five years, diesels will represent about 25 percent of the entire light aircraft market, and much of that demand may come from China. “That market may not be tomorrow, but it may not be far away,” Doo said. Because it believes time to market is critical, Continental bought mature diesel technology from other companies rather than developing its own clean sheet designs, said Doo. AVweb will have more coverage on the Thielert purchase later this week.