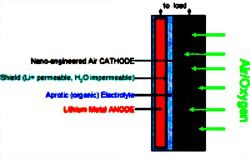 To realize the potential of electric flight, batteries are key — they must be safe, powerful, affordable, and long-lasting — and several of the speakers at this week’s CAFE Electric Aircraft Symposium are working to address these issues. Winfried Wilcke, a researcher in an IBM lab in San Jose, Calif., is studying the potential “Mount Everest” of batteries, which would incorporate lithium-air technology. His goal is to build batteries for electric vehicles that could last for 120,000 miles with operating costs about one-fifth of today’s lithium-ion batteries. This is a “bleeding-edge science project,” Wilcke said, but perhaps in 10 years or so, lithium-air batteries could provide an option for aircraft as well as cars.

Dan Friel, director of systems engineering for Leyden Energy, told AVweb the company currently makes batteries for laptops and cellphones, but they are exploring the potential for building batteries that would be used by aviation manufacturers, especially for vertical flight. “Near the end of its capacity, a battery’s ability to deliver power drops off fast,” says Friel, which is not ideal if a pilot is ready to land but then needs to go around. Leyden has developed a lithium-ion battery that retains extra reserve capacity, effectively extending the useful range, and has been testing it. “There’s a need that’s drawn us into it,” Friel said. His company was not a presenter at the symposium, but sent several battery experts to explore the potential aviation market. Brothers Thomas and Christopher Cook, who are partners in a new company called LithiumStart, gave a talk about their efforts to develop complete “plug and play” battery systems for aircraft. They also were searching for partners among aircraft manufacturers. They plan to also offer products that could be retrofit to an existing airframe.

But the research that Maher El-Kady, from UCLA’s Kaner Lab, explained on Friday could make all of those battery efforts obsolete. El-Kady said his lab is working with graphene micro-supercapacitors, which are quick and cheap to make from carbon — and which can be disposed of in an organic compost pile. These materials can be used to create devices that can charge and discharge a hundred to a thousand times faster than standard batteries. More details about the technology can be found in the video posted here and at the UCLA website.