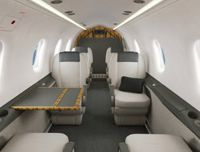 The existence of a Pilatus jet project has been discussed in the European press since at least 2011 and Pilatus has confirmed its plans to show a mockup of its twinjet design, the PC-24, at EBACE, Geneva, this May. Earlier reports had forecast that deliveries of the new jet would reach customers by 2015 for an asking price near twice that of the company’s best-selling model, the PC-12 turboprop. The forecasts also foresaw the design’s public rollout in the fall of 2012; later dates should now be expected. There are multiple rumors surrounding the PC-24 design that the May unveil should put to rest.

Rumors about the jet’s design include possible similarities with Embraer’s Phenom-series jets carrying up to eight seats but sporting a cargo door. Turboprop sales like those of the PC-12 have been relatively strong since the economic downturn of 2008. Pilatus saw very strong sales that year and also in 2010 and 2011. The company has also recently landed multiple military contracts, leaving it with an order backlog that could stretch well more than three years. Meanwhile, the company has been in expansion mode, increasing hires and supporting its facilities as it prepares for growth.