Lots of attention is currently being lavished on the new electronic piston engine control systems that are nearing certification: the TCM/Aerosance FADEC, Lycoming/Unison’s EpiC, and the adaptive digital ignition system being developed by General Aviation Modifications Inc. (GAMI). While these developments are certainly worthwhile and long overdue, they represent a relatively small incremental improvement to the 40-year-old powerplant designs that are still ubiquitous in today’s piston-powered aircraft. But some truly revolutionary changes to aircraft piston engines are in development, and it may be only two or three more yeas before we start seeing these radically different engines powering our aircraft.

In my view, one of the most exciting of these is the General Aviation Propulsion (GAP) Program engine that TCM is developing under an R&D contract from NASA. Some of you probably saw an early prototype at Oshkosh last year. Five prototypes later (with number six presently being built), the GAP engine is a whole lot closer to reality. This fall, the engine will be mounted in its first flying test-bed, a Cessna 337 Super Skymaster. (The GAP engine will be in front, and a conventional IO-360 will be in the rear.)

Not Your Father’s Piston Engine

TCM’s GAP engine is a 200 HP, liquid-cooled, two-stroke, compression ignition (Diesel) engine that runs on jet fuel (or pretty much anything else you care to pour in the tank, including Jack Daniels). Due to its novel design and extremely low parts count, the engine is targeted by NASA to cost about one half as much as today’s 200-HP piston aircraft engines. It is quieter, smoother, has vastly better fuel economy, and a 3,000-hour TBO. Furthermore, when the oil companies finally quit making leaded avgas, the GAP engine won’t care a bit.

The GAP engine design is like nothing I’ve ever seen before. It is built using “uniblock” construction, which means that the case halves, cylinders, and cylinder heads are all part of one very complex aluminum casting. This is a big part of what makes the engine so light and so cheap to build. But it also means that there will be no such thing as a “top overhaul” since the cylinders are an integral part of the engine case and cannot be removed or replaced without pulling the engine and splitting the case.

If this makes you as nervous as it did me (at least at first), consider this: The GAP engine operates at a lethargic red-line of 2,200 RPM, and has EGTs that are perhaps 500F lower than what we’re used to seeing in today’s avgas-fueled engines. Each cylinder has four exhaust valves (and no intake valves – it’s a two-stroke engine and induction comes from a mid-stroke intake port machined into the cylinder liner) that operate at such low temperatures that they ought to last forever (relatively speaking, anyway).

Another interesting wrinkle is that this engine is inherently a single-lever power control affair, with that single lever being a fuel control. The engine receives more induction air than it can possibly use from a turbocharger (but no wastegate – the turbo runs flat out all the time), so how much power it puts out is simply a function of how much fuel is fed in. (It’s a lot like a turbine engine in this regard.)

The engine is fitted with a Hartzell constant-speed prop with a governor that is permanently fixed at 2,200 RPM – there’s no cockpit prop control. This makes for very quiet operation, very low friction losses, and excellent prop efficiency (since the prop tips never get close to Mach 1). Not to mention one less thing for the pilot to worry about. Now that’s a constant-speed prop!

Besides being quiet, the GAP engine is incredibly smooth – in test cell runs, it exhibits only about ten percent of the vibration of a conventional TCM IO-360. Part of the reason for this is that the GAP engine is a two-stroke powerplant with twice as many power pulses per revolution as a conventional four-stroke aircraft engine. The other part is that the engine features a very sophisticated (and very secret until the patent applications are all in) dynamic balancing system both ahead of and behind the power section that is designed to cancel out virtually all reciprocating vibration. 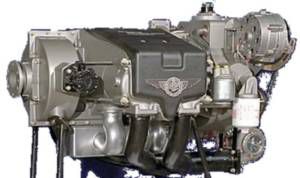 Although the GAP engine will probably be flying in its Cessna Skymaster test-bed well before the end of 2000, John Barton indicated that it is still a long way from certification – perhaps three years away. There is a great deal of longevity testing to do, particularly since this engine has non-replaceable cylinders. There are also some technical problems to solve before the engine will be ready for prime time.

For example, since the engine is a two-stroke Diesel, it is essentially incapable of operating in normally-aspirated mode – it can’t suck air in, so air has to be blown in under pressure. Therefore, failure of the turbocharger basically means failure of the engine. So although the GAP prototypes all use a single turbocharger, the production engine will probably have to be equipped with dual turbos to ensure that the engine can keep running in the face of a turbo failure. (Another possibility is a belt-driven supercharger that would serve as a backup to the turbo.) One nice thing about the turbo-Diesel design, though: The GAP engine is flat-rated to provide full takeoff power up to at least 6,000 feet (and perhaps as high as 10,000 feet).

Also, TCM is going to have to make some changes to the engine so that it can be started in cold weather. The current prototypes have no glow plugs, and while starting the engine in Alabama hasn’t been to much of a problem, Minneapolis or Fairbanks might be a different matter altogether. TCM’s current thinking on this is to add an electric block heater to the liquid cooling system, but no firm decision has been made yet.

I own two Diesel-powered automobiles, and my experience with those indicates that the most vulnerable component seems to be the high-pressure fuel pump required for direct injection. The GAP engine addresses this problem is elegant fashion: Each cylinder of the GAP engine has its own private high-pressure fuel pump – a tiny piston-type pump cast into each uniblock cylinder and driven off a separate lobe of the camshaft. So in the event of a fuel pump failure, a four-cylinder GAP engine continues to run on three cylinders, or a six-cylinder GAP engine on five.

The GAP engine would solve a raft of problems that now plague piston powerplants, but it still has some problems of its own that TCM needs to solve. For one thing, the GAP prototypes weigh too much – significantly more than the 300-lb. IO-360 engines that it’s designed to replace – so TCM will need to work hard to get the weight down. For another, the engine has yet to prove itself in endurance testing to make the projected 3,000-hour TBO. Endurance is doubly critical in this engine since the cylinders aren’t removable, so virtually any serious problem that develops will require pulling the engine and splitting the case. Although TCM has built five prototypes and is working on a sixth, none of the GAP prototypes have run more than about 50 hours as of this writing. So durability remains a big question mark.

If the test-cell endurance runs and the Skymaster flight trials go well, then by AirVenture 2001 we may see GAP engines flying in three more demonstrator aircraft: a Cirrus SR20, a Piper Seneca IV, and maybe even a six-cylinder 300-HP version in a Lancair Columbia 300.

I can’t wait. FADEC, schmadec! This sure sounds to me like what the future of piston GA should be. Godspeed on this project, TCM!