Myfirst Aerostar, a 1974 600A, came equipped with a Wulfsberg Flightphone I. Thiswas a manually-operated early model — "New York operator, this is QM-2602I’d like to call 215-555-5575 please…" — and was only half-duplex. Thatmeant only one person could speak at a time; "I’ll be home at 6:30 …over," I’d say to hear my wife reply, "…ner will be ready." Shecould never get the hang of waiting for me to release the transmit button beforespeaking.

At the time, I regularly flew from Boston to Philadelphia (where I lived)after a day’s work in Beantown and, when I was over New York, I’d phone home togive a good estimate of my arrival time. I didn’t use the phone very much, butit was nice to report in at the end of a long day. Every once in a while it wasVERY useful: My wife and I were once delayed by a thunderstorm and we were ableto call and tell the kids that Mom and Dad would be about an hour late. If ithad better coverage and was more user-friendly, I’m sure we would have used itmore.

Today, we don’t think much about mobile communications. Nearly everyone seemsto have a cellphone, but once in our airplanes we are out of normalcommunications until we land. The promise of better telephone communications inaircraft came from newer and better WulfsbergFlightPhones, some which even had direct-dial capability. It wasn’t unusualto see business or charter aircraft with phones installed. Inmarsatsatellite phones offer better coverage and ease of use, but are veryexpensive to own, install and operate. Now, general aviation has some optionsthat don’t require and investment that costs more than many GA airplanes areworth. 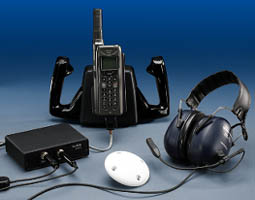 IcarusInstruments, of Takoma Park, Md., has introduced a product that innovativelyconnects a standard Kyocera SS-66K Iridium handset satellite phone to anaircraft’s headset. Utilizing the 66 satellites of the Iridium constellation inlow earth orbit, this system offers 24-hour-a-day coverage anywhere in theworld. All it needs is clear view of the sky that can be ensured by theinstallation of a Sensor Systems Iridium antenna on top of your airplane. Byutilizing a standard Iridium phone, the system’s costs are kept to a record low$4,995, including the phone, interface and externally mounted TSO’d antenna.Service plans start at $14.95/month and $2.39/minute for all North American andCaribbean calls. While the per-minute charge is fairly steep, the cost ofownership and monthly cost is low enough to be of interest to a lot of GAairplane owners.

Here’s How It Works…

SatTalkallows you to engage in a satellite telephone call from your cockpit whileseamlessly continuing to communicate with air traffic control. Your existingaviation headset is used for all telephone communications to ensure readabilityand normal ATC communications. Plug your headset and mic jacks into the IcarusInstrument SatTalk box, the SatTalk into the aircraft’s headphone and mikejacks, and the cable from the SatTalk to the Iridium handset. Initiate a callusing the handset. When the party answers your will hear them in your headsetand may talk to them using the headset’s microphone. 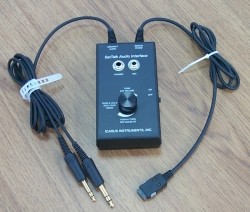 Afteryou have established a satellite telephone connection, ATC may come on thefrequency to talk to you or another pilot. SatTalk detects the incoming ATCaudio and reduces the level of the sat phone audio so you can determine if thecall from ATC is for you. If you then press your push-to-talk switch (PTT) andrespond to the call from ATC, SatTalk sends a short pre-recorded announcement tothe Iridium phone party telling them to "Standby for a moment."Meanwhile, you continue your ATC communications in private. When you arefinished with ATC, you simply start talking without the PTT pressed and theIridium call will continue normally. If the initial incoming ATC transmission isfor another pilot, the Iridium audio level will resume its normal level as soonas the frequency is clear.

If you arrange with ATC to go off frequency for a while, SatTalk has anexclusive mode during which incoming ATC audio is ignored. This allows for anuninterrupted telephone conversation. This mode would also be used if apassenger were using the Iridium phone. 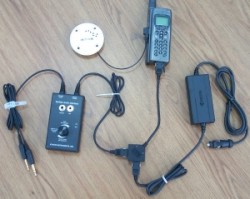 SatTalkincludes the Kyocera Iridium satellite telephone and lithium-ion battery,providing 100 minutes of talk time. Calls can be made from anywhere in the worldat any altitude at any time. The phone can be easily removed for use outside theaircraft using its built-in antenna and battery.

Iridium is a satellite constellation of 66 low-earth orbit transponders thatprovide worldwide telephone coverage via Iridium phones and one of two serviceproviders. Motorola or Stratos provides service for the Iridium constellation.Motorola can be reached at 800-232-6274 while you can find Stratos at888-766-1313. Each Iridium phone comes with a slot for a SIM card. Eachsubscriber gets their own SIM card, which contains information about yourservice plan and your phone number. More than one person can share (and beseparately billed for) an Iridium phone via separate SIM cards. Iridium got itsname from the fact that the element iridium has 66 electrons circling itsnucleus, the same number of satellites in the Iridium constellation.

…And What It Costs

Both of these service providers have multiple plans. Minimum plans include amonthly charge of less than $20 and per minute billing of between $2.50/minuteand $3.79/minute depending on where you are and where you are calling. The lowerrate applies to all of North America and the Caribbean. A more moderate plan isabout $35/month with North American calls costing $1.89/minute. While certainlynot as inexpensive as your cellphone, the price is about the same as I used topay with the old, limited coverage, half-duplex Wulfsberg. I don’t plan on idlechatter while en route, but having the capability to use the landline systemwhile in the air should be useful. 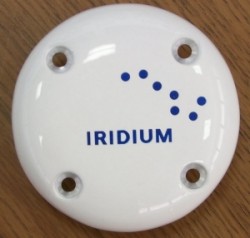 Advantagesof the Iridium system include worldwide coverage, transparent handoffs of callsfrom one satellite to another and portability — you can take the phone out ofthe airplane with you. You can send a text message up to 120 characters long tothe phone via email or the Iridium Web page at no charge. One disadvantage: thecompany has not been profitable and filed for Chapter 11 financial restructuringin 1999. Recently, however, the company has been securing additional financing.For more information on Iridium, check thecompany’s web site.

Wulfsberg has gone through a few corporate acquisitions in recent years. In1997, AlliedSignal sold most of the company to Chelton, but apparently that didnot include its FlightPhone line of business. With the recent acquisition ofAlliedSignal by Honeywell, it’s not clear where this product line might go. Atany rate, Honeywell has its own airborne telephone system, the AIRSAT.Also, there is another provider that has a general aviation product. AirCellInc. located in Louisville, Colo., has a unit that uses traditional cellulartechnology and agreements with local cellular providers. Aircell has technologythat allows it to use regular cellular frequencies without polluting nearbycells because the signal is coming from a fast-moving airplane. AirCellequipment costs and usage are similar to those costs for Iridium. Aircellcoverage is not continuous, even over the United States, and is non-existentover large bodies of water. The system as currently configured is permanentlyinstalled and not portable. While this reduces the number of wires in thecockpit, it does reduce the functionality of the system.

Icarus Instruments also makesother innovative electronics for general aviation. President Steve Silverman isa real help and a wealth of knowledge on many subjects, the latest of which issatellite telephonic communications from the cockpit.

AVweb will be installing and flying the SatTalk Iridium system as soonas we can get the antenna installed on our already-antenna-filled airplane. Lookfor more details on using and flying with this system in the near future.