I‘ve used the ICOM IC-A20 andIC-A21, King KX-99, and Sporty’s A300. They’re all fine handheld aviation transceivers,and it has always been difficult for me to pick any one of them as the best-of-category.

For many years, I’ve carried an ICOM IC-A20 in my flight bag. It has always given meflawless service. When I purchased the ICOM, I made that choice mostly because ICOM has along history of making excellent handheld tranceivers for amateur radio and marine banduse, so I figured they’d know how to make a reliable aviation handheld. I’ve never hadcause to regret that choice.

Back in January 1995, I was given the opportunity to beta-test ICOM’s new IC-A22transceiver for several months before it went on the market. I wondered why ICOM wouldeven bother developing a new aviation handheld. After all, I reasoned, "if you’veseen one aviation handheld, you’ve seen ’em all."

Wrong! The IC-A22 just blew me away. It was love at first sight! And after two years inservice, I’m still convinced it’s the best aviation handheld transceiver there is.

The most obvious difference between the new IC-A22 and previous-generation handhelds isthat the new ICOM is much smaller and lighter. It’s about one-third smaller in size, andabout 40% lighter (15 oz vs. 25 oz according to my postal scale) than its predecessorIC-A20 and -A21 or the King KX-99. 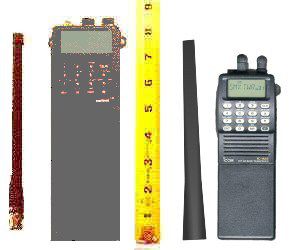 But thesenumbers don’t really tell the whole story. Subjectively, the size of the IC-A22 feelsjust right. It fits my hand perfectly. It slips neatly in my jacket pocket. It stows in mysoft-sided flight bag without a bulge. I don’t think I’d want it to be any smaller than itis.

After a week of testing the IC-A22, my old handheld seemed incredibly big, heavy, andunwieldy.

Size-wise, the only thing that seems strange about the IC-A22 is its antenna. The radiocomes with a typical "rubber duckie" style antenna that is approximately thesame size as the antennas for previous-generation ICOMs and the King KX-99. Thisstandard-size antenna seems to dwarf the diminutive new transceiver.

It seems a pity that the antenna couldn’t have been shrunk along with the radio itself.But antenna size is a function of frequency, and performance would have suffered if ICOMhad used a smaller antenna. Such are the laws of physics.

There appears to be no penalty associated with the IC-A22’s small size and weight. Itstransmitter power is exactly the same as previous models (5 watts PEP, 1.5 watts carrier),and its receiver, noise blanker, and audio quality seem every bit as good as the older,larger radios.

The otherobvious difference that sets the new IC-A22 apart from earlier handhelds is its capacious50-channel frequency memory. (My old IC-A20 could memorize only 16 frequencies.) Whatmakes this 50-channel memory so marvelously useful is that each memory slot can beprogrammed with not only a frequency, but also an alphanumeric identifier as well. Theidentifier may be up to six characters long, with an optional hyphen between the third andfourth characters.

At first, it can be a little tricky to program these identifiers into the memories. TheIC-A22 uses a typical numeric keypad for data-entry, so entering alphabetic informationrequires multiple keypresses. ICOM cleverly decided to use the same digit-to-letterassignments as a standard touch-tone telephone dial. But not so cleverly, they failed tomark the letter assignments anywhere on the radio itself. Consequently, when programmingalphabetic identifiers into memory, it’s helpful to have a telephone dial nearby that youcan refer to. There’s also a chart in the IC-A22 instruction manual if you don’t happen tohave a phone handy.

If you are really into memory programming, ICOM offers an alternative to all thisbutton pushing. You can use an accessory PC-to-radio "cloning cable" (OPC-478,$42.00) to hook the IC-A22 to your DOS-based personal computer, and use ICOM’s"cloning software" (EX-1563, $40.00) to load and save the radio’s frequencymemories. While this is a very powerful capability, you’d have to do a good deal ofprogramming to justify the $82.00 cost of the cable and software.

The IC-A22includes a very capable VOR navigation capability. When you tune the radio to any of the200 navigation channels in the 108-118 MHz range, the navigation features are activatedautomatically.

There are two nav modes: DVOR mode and CDI mode. In DVOR mode, the radio display actsas a digital RMI and continuously displays either your radial from or your bearing to thestation. In CDI mode, you can specify the radial or bearing that you want to fly (OBSsetting) and the radio displays a pseudo-analog course deviation bar that shows youwhether you are left or right of the desired course.

If you want to fly directly to a VOR from your present position, the IC-A22 lets youstart off in DVOR mode (to determine your bearing to the station) and then switch to CDImode with a single keypress to track that radial inbound. I found the navigation modesquite intuitive and easy to use.

If you tune in a localizer frequency, the IC-A22 displays the letters "LOC"in place of the usual RMI display. It does not support localizer navigation. (Neither doesany other aviation handheld that I know of, although I’ve often wondered why not.)

The IC-A22 includes a bunch of other handy capabilities, including:

The radio comes standard with the following accessories:

ICOM also offers the IC-A3, a comm-only version of the same radio with no navfunctions, for a "street price" of $499.00. There’s also a "Sport"version of the IC-A3 (with alkaline battery instead of NiCd) that sells for $80 less:$419.00. If you carry a handheld GPS, the IC-A3 (regular or "Sport") isan attractive choice because you probably don’t have much need for the VOR nav functionsof the IC-A22.

Although the IC-A22 and IC-A3 come with everything you need, there are a number ofoptional accessories available at extra cost:

I’d particularly recommend considering the CM-167 alkaline battery case and keeping itloaded with fresh AA alkalines for emergencies. The alkaline pack has nearly twice thepower capacity of the NiCd pack, and alkalines have excellent shelf life. If your primaryuse of the radio is as an emergency backup, you might want to forgo the NiCd batteryaltogether and purchase the alkaline-only "Sport" version for $80 to $140 less.

You won’t have any regrets if you buy this radio. I sure wouldn’t part with mine!

NOTE: Several AVweb sponsors sell a variety of VHF handhelds and accessories at discounted prices. Your patronage of these firms helps support continued free access to AVweb and AVflash (including in-depth product review articles like this one). So if you plan to purchase a VHF handheld, we’d sure appreciate your patronage.