The ICOM IC-A3 and -A22 transceivers are subject ofa separate AVweb review article.

When ICOM introduced its new,lower-cost IC-A4 handheld VHF air band transceiver in March 1998, I was anxious to checkit out. ICOM dominates the aviation handheld transceiver market, and deservedly so: theirhandhelds have always been the best on the market in my opinion. Up until the mid-1990s,ICOM’s IC-A21 had serious head-to-head competition from Bendix/King’s KX-99, as well aslower-end competition from Narco and Sporty’s. But when ICOM introduced the IC-A22 andIC-A3 in 1995, they basically blew the rest of the competition away. Narco no longer evenoffers a VHF handheld, and Bendix/King never tried to field a successor to the KX-99 tocompete with the third-generation ICOMs.

While there are still two other players in the VHF handheld market (Sporty’s andDelcom), ICOM so dominates the market these days that the principal competitors for thenew ICOM IC-A4 are ICOM’s own higher-priced units, the IC-A3 and IC-A22. (The IC-A3 andIC-A4 are comm-only transceivers, while the IC-A22 is identical to the IC-A3 but with theaddition of a VOR nav capability.)

At $299, the new IC-A4 is a whopping $200 cheaper than the IC-A3. That alone seems likea pretty compelling reason to prefer the -A4. The question is how much capability do youlose, compared to ICOM’s higher-priced spread? 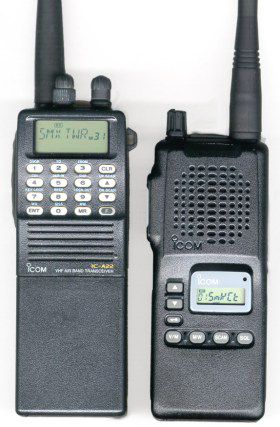 As you can see in the photo atright, the A4 is a bit less tall than its more-expensive siblings (5 1/2" versus 63/4"); width and depth are about the same. ICOM says the A4 is "small enough tofit into a pocket" and that’s true…provided you have a big pocket and you ignorethe "rubber duckie" antenna.

The A4’s antenna is 8" high, nearly one and a half times the height of the radioitself. The visual effect is definitely one of "the tail wagging the dog." Withtheir antennas installed, the A4 is almost exactly the same height as the A3/A22. So whilethe A3/A22 was dramatically smaller than its predecessors, the A4 isn’t really smallerthan the A3/A22 in any truly meaningful way.

More significant than the size difference is the A4’s much-reduced compliment ofcontrols. While the A3/A22 sports 18 keys, three knobs plus the push-to-talk bar, the A4has just 7 keys and one knob plus PTT. The reduction in buttons and knobs was a majorcost-saving factor in the design of the A4. However, since the A4 supports most of thefunctions of the A3 with only a third as many controls, many of the keys wind up doingdouble or triple duty. This makes the A4’s user interface somewhat less intuitive and moredifficult to learn. At least it was for me. In fairness, ICOM’s user manual is very clear,and a small quick-reference card is also included with the A4. 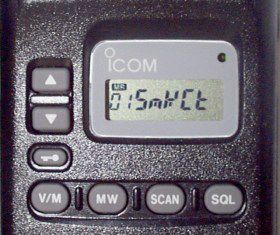 The A3/A22 tuning andsquelch knobs are gone, their functions replaced in the A4 with digital controls. Tuningis accomplished by pressing and holding the up- or down-arrow key until the digitalfrequency display has slewed to the desired frequency. While this works, I found it quiteawkward (and slow!) compared to using the tuning knob or the direct-entry keypad on theA3/A22. This awkward tuning is one of the most serious drawbacks of the A4’s design, in myopinion…we’ll get to the others shortly.

Adjusting the squelch on the A4 is accomplished by holding down the SQL key while usingthe up- or down-arrow key…I found this quite adequate, especially since squelchadjustment isn’t needed all that often.

…and a smaller, cruder display 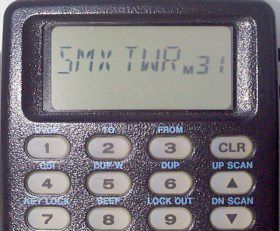 ICOM also economized on theA4’s LCD display. As you can see from the photos of the two displays (A4 above, A3/A22right), the A4’s display has only about 25% of the area as the one on the A3/A22.

The A4’s display is very crisp, well backlit, and entirely adequate for numeric displaypurposes. Its shortcomings become apparent, however, when displaying alphabeticinformation. The A3/A22 display employs 12 segments per character, making it very legiblein alphabetic mode. The A4 display, on the other hand, has just 8 segments per character,resulting in alphabetic characters that range from  ugly to indecipherable. Someletters appear as uppercase, others as lowercase, and a few as nearly-unrecognizablehieroglyphics. For example, compare the labels for my home airport control towerfrequency: a very clear "SMX TWR" on the A3/A22, versus a barely-legible"SmXCt" on the A4…ahem!

The A4 transmits and receives over the entire 760-channel aviation VHF communicationsband from 118.000 to 136.975 MHz in 25 KHz steps. It also receives (but does not transmit)in the VOR/LOC band from 108.000 to 117.975 MHz, so you can listen to HIWAS, TWEB, or ATISbroadcasts over VORs…something that the A3 does not support but the A22 does. Unlike theA22, however, the A4 has no provision for duplex transmission: listening on a VORfrequency while transmitting on 122.1 MHz, for example. The A4 also lacks the ability toreceive National Weather Service broadcasts in the 161.650 to 163.275 MHz band, a featureof the A3 and A22 that I’ve found useful from time to time.

The A4 has 19 memory slots, compared to 50 on the A3/A22. For most users, 19 slots willbe plenty. Each memory slot can hold a frequency (e.g., 118.300 Mhz) plus an optional5-character alphanumeric identifier (e.g., "SmXCt"). Memorized frequencies,identifiers and other radio settings are stored in non-volatile EEPROM memory, and isretained even if the battery is completely drained or the battery pack removed from theradio. Much like the A3/A22, the A4 offers two different scan modes: memory scan andtotal-band scan. Memory slots can be selectively locked out, causing them to be skippedwhen the radio is in memory scan mode.

The A4 has to basic operating modes: VFO mode and memory mode. The terminology revealsthe A4’s heritage: while pilots may not recognize the "VFO" acronym (no, it’snot related to "VFR"), any amateur radio operator can tell you that it standsfor "Variable Frequency Oscillator."

Pressing the "V/M" key toggles the radio between VFO mode and memory mode. InVFO mode, the A4’s up- and down-arrow keys tune up or down the entire VHF air band from108.00 MHz. to 136.975 MHz in 25 KHz steps, and the "SCAN" key causes the radioto scan the entire band looking for signals. In memory mode, the up- and down-arrow keyssequence through the A4’s 19 memory channels, and the "SCAN" key causes theradio to scan the memory channels, skipping over those that have been locked out.

The early A4s (including the one I evaluated for this review) turned out to have aterrible shortcoming: they would transmit only while in memory mode, not in VFO mode. Icomplained bitterly about this, as did almost everybody else who tried to use one of theseearly radios. Much to their credit, ICOM quickly came up with a software fix to allow theA4 to transmit in both VFO and memory modes. Furthermore, they announced that owners ofthe early "brain damaged" radios could return their A4s to the ICOM servicedepartment for a free software transplant, and promised 24-hour turnaround. It’s this kindof customer-oriented attitude that has made me a long-time ICOM fan.

The performance specs of the A4 are excellent. Its receiver offers virtually the samesensitivity and selectivity as the A3/A22, and puts out a healthy half-watt of audio powerinto the speaker or headphones.  Sound quality seems every bit as good, althoughaviation comm is hardly hi-fi under the best of circumstances.

The A4 transmitter offers about 2/3 the power output of the A3/A22 (3.7 watts PEP, 1.0watt CW), which is more than adequate for most users. Microphone quality seems quite goodif the reports I received from ATC are to be believed.

The A4 comes standard with a 700 mAh rechargeable NiCd battery pack (BP-195) and an ACwall charger that will fully charge the pack in 10 hours (i.e., overnight). Once charged,the battery is good for about 6 hours of operation (based on 5% transmit, 5% receive, 90%standby). You can purchase additional BP-195 packs for $42.00 apiece.

If you prefer to use alkaline batteries, a BP-194 battery case is available ($18.00)that takes eight AA-size alkalines and provides 10 to 12 hours of operation. The samebattery case may be loaded with eight AA-size NiCd batteries and will provide similarperformance to the standard BP-195.

In the battery department, the A4 has a couple of significant limitations not presentin the A3/A22. You cannot recharge the A4’s battery while the radio is on, and you cannotcharge one battery with the wall charger while the radio is being used with a secondbattery (because the charging jack is on the radio, not on the battery pack). In contrast,the A3/A22 can recharge and operate simultaneously, and the A3/A22 battery packs areequipped with charging jacks so they can be charged with or without the radio.

If you must charge one battery while using a second one to power the A4 — or if youcan’t wait to charge your batteries overnight — you’ll need the optional desktop rapiddrop-in charger (BC-119 charger plus AD-81 adapter, $120.00), which will charge thebatteries in 1.5 and 2.0 hours, respectively. Other available accessories include: 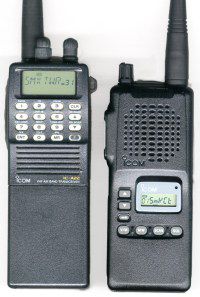 Even with its shortcomings (awkward tuning, less intiutive user interface, smallerdisplay, recharging limitations), the ICOM IC-A4 is definitely worthy of considerationbecause of its very attractive price. Keep in mind that for many pilots, a handheld VHFtransceiver is purely a backup device that languishes in the flight case or seat-backpocket and seldom used except in the event of an in-flight electrical failure. If thisdescribes you, then it probably makes sense to take advantage of the $200 savings thatyou’ll get by buying an A4 instead of an A3. That $200 might be much better spent on afancier handheld GPS…something you’ll get to enjoy on virtually every flight.

On the other hand, if you’re the kind of pilot who uses a handheld VHF transceiver alot — to pick up pre-departure clearances, for example — the awkward tuning and othershortcomings of the A4 may well annoy you as much as they did me. You’ll probably behappier if you bite the bullet and buy an A3 for $200 more. Both the A3 and A4 aretop-quality radios with excellent performance. But the A3’s user interface is a lotbetter, and worth the extra money if you use the radio more than just occasionally.

NOTE: Several AVweb sponsors sell a variety of VHF handhelds and accessories at discounted prices. Your patronage of these firms helps support continued free access to AVweb and AVflash (including in-depth product review articles like this one). So if you plan to purchase a VHF handheld, we’d sure appreciate your patronage.