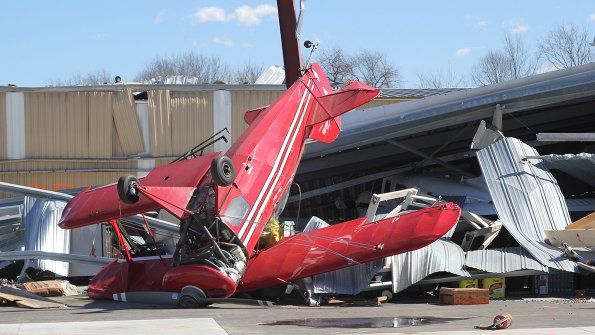 The National Weather Service says straight-line winds, not a tornado, caused millions of dollars in damage at Johnson County Executive Airport in Olathe, Kansas, last week. It estimated winds of up to 85 mph were responsible for the damage or destruction of up to nine hangars and 45 aircraft, along with other property. The wind burst was associated with a storm system that surprised officials on the evening of March 6. No warnings had been issued because no tornadoes were seen. More photos below.

Ironically, county officials were set to hold a disaster drill at the airport the following day. The airport was closed to the public for several days while unstable buildings and debris were cleaned up but limited operations resumed by 9 a.m. on March 7. Most of the damage occurred to buildings and aircraft on the east side of the field but the west side was also affected. Airport tenants reported that aircraft were blown over the top of buildings and smashed on the concrete by the winds.