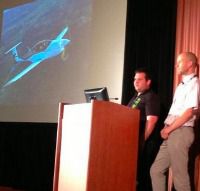 Pipistrel has several new all-electric and hybrid products in the works, Tine Tomazic told AVweb at the CAFE Electric Aircraft Symposium, in Santa Rosa, Calif., on Friday, and the new powerplants offer substantial savings over conventional models. A new battery pack for the Taurus electric G2 will boost power by 33 percent. Also, a converter kit will be offered so owners of the gasoline-powered Taurus can easily switch it to an electric powerplant. Pipistrel is also creating a complete electric-powerplant kit for homebuilders as a drop-in replacement for the Rotax 912. Prices for these new products will be announced at EAA AirVenture, Tomazic said. Also, a hybrid and an all-electric version of the four-seat Panthera are in the works. “We believe hybrid is the future of flight when it comes to general aviation,” Tomazic said.

The Panthera, which debuted last week at Aero Friedrichshafen shortly after its first flight, was conceived to fly with various powerplant options, Tomazic said. A hybrid version will cruise at 170 knots on 7 gallons per hour. Also in the works is a project to create an electric version of the Alpha trainer, which could bring the cost of training down by 70 percent, he said. “Imagine how many new pilots such an approach could produce,” Tomazic said. “It could be a real breakthrough.”

AVweb‘s Paul Bertorelli got a close look at the Panthera at Aero; click here for that video.