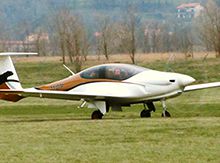 The four-seat, 1000-nm, 200-knot, (predicted) all-composite Pipistrel Panthera rolled onto the grass at Pipistrel’s Slovenia facility and successfully ran behind its 210-hp Lycoming for the first time Thursday. The aircraft is highly anticipated by supporters and critics anxious to see if it will live up to performance predictions and also come to market at a competitive cost. A Pipistrel representative told AVweb Friday that the aircraft’s airshow schedule has not yet been set for 2013, but the company aims to land the aircraft on U.S. soil as soon as possible. For now, you’ll have to be satisfied with video of the sleek aircraft’s trailing-link landing gear absorbing the Slovenian turf (backed by an AC/DC soundtrack).

The company said Thursday that it is continuing “functional ground tests” in preparation for first flight and a complete test program. The aircraft is designed for very light weight with a titanium retractable landing gear but includes as standard a full airplane parachute system. The company, which has seen successful in electric flight, has announced plans for several versions of the aircraft, including conventional, hybrid, and all-electric powered versions. Pipistrel will be sending a representative to the CAFE Electric Aircraft Symposium April 26 and 27 to discuss the hybrid Panthera and the “ideal electric trainer.”