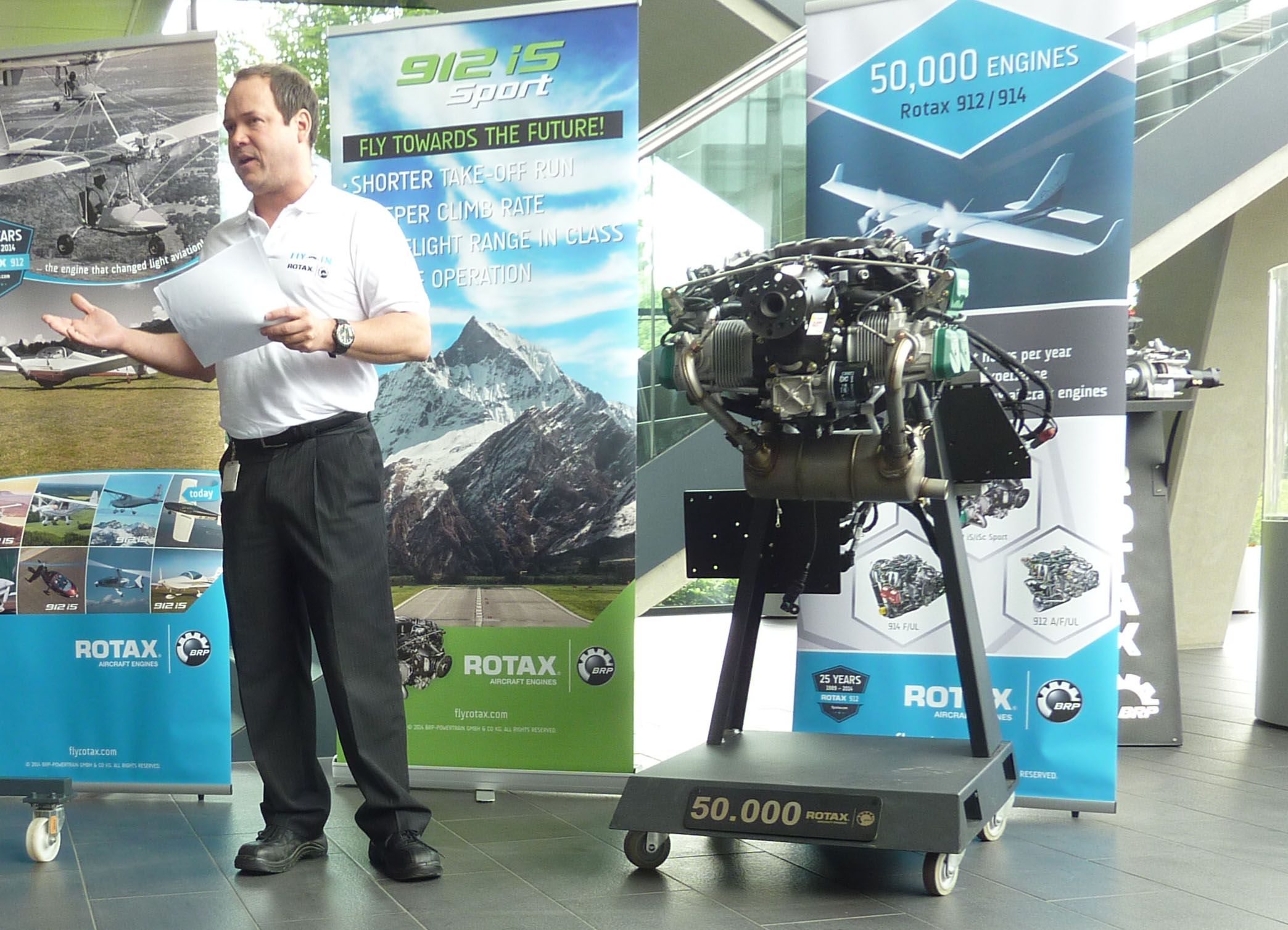 At its Gunskirchen, Austria factory, Rotax on Thursday rolled out its 50,000th 912-series aircraft engine and celebrated the 25th anniversary of the engine family with a fly-in at the nearby Wels airport. Manufacturers from around Europe flew in Rotax-powered aircraft for sales demos. The company combined the event with an annual homecoming of Can-Am Spyder Roadster owners, whose engines are also manufactured in the Gunskirchen plant, although on a different assembly line.

The 912 iS, introduced here two years ago, continues to find new customers in the ultralight and light sport markets and Rotax expects the new 912 iS Sport, which it debuted at Sun n Fun in April, to become the engine of preference in the U.S. light sport segment. Thursdays celebratory engine was a 912 iS Sport and the engine is now configured for volume production and deliveries.

With roots in the motorcycle industry, where such promotions are common, Rotax is set up to conduct factory tours and it was showing around hundreds of people this week. We want to give them a bit of a flavor about what the company is all about, our manufacturing processes and the rigor behind our manufacturing so they can see why theyre paying the money theyre paying for Rotax engines, said Francois Tremblay, director of propulsion systems for BRP Powertrain GmbH, Rotaxs mother company.

When Rotax introduced the 912 iS in 2012, the general sentiment was that it was about due for a new product, but the Sport version, with improved induction and better torque, was a surprise. That led AVweb to ask what else Rotax has up its sleeve.

Were not a company that stands still. When I look at the aerospace industry and you look at the future, people want more power. The industry is going towards four seaters. Theres always a requirement for more power. So thats something were looking into now, Tremblay said. Does that mean theres a 150- to 180-hp four cylinder in the offing? Without giving you any details, basically yes, were looking for options in this area, Tremblay told us.

BRP sales across the board continue to improve, but have not recovered to pre-2008 levels. Rotax declines to give exact sales figures, but in 2008, it manufactured more than 5000 aircraft engines, both two-stroke and four-stroke. Two-stroke demand has dropped sharply since 2002, but four-stroke demand has more than doubled during the same period. In 2013, Rotax built between 3000 and 4000 aircraft engines.

Where are the strong markets?

Its a combination. The U.S. is starting to get stronger again, but so are the emerging markets, Brazil and Russia. Definitely, it gives us a positive growth, Tremblay said. Kit-built aircraft represent an ever larger portion of Rotax sales, a market Rotax plans to focus more efforts on expanding, according to Tremblay.

The European market has been flat, but you know Europe is an export market. So even if the local market is flat, the European builders are starting to export more. So thats why the sale of engines in Europe is really going quite well, even if the planes are not staying in Europe, Tremblay said. Austria, Germany and France are strongest, with Italy, Portugal and Spain a little less so.

Russia has been on and off. With the overall political situation, its been tougher over the last couple of months, but the enthusiasm for light sport is growing in Russia, he said. China represents double-digit growth for Rotax. Of course, we started from a smaller base. There are two things going on in China. First, the local consumption, there are now more Chinese buying planes. And you see manufacturers exporting their manufacturing to China and that creates a natural demand as well. But it wont be a revolution overnight. Its going to take time, Tremblay said.