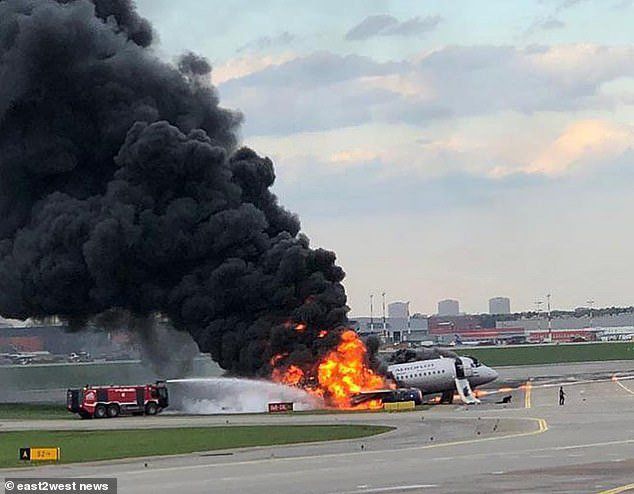 New video has emerged showing the Aeroflot Superjet 100 that burned at a Moscow airport was not on fire when it landed but caught fire on the runway after an extremely hard landing and bounce. The right engine erupted in flames on the second impact in the fuzzy surveillance tape. At least 41 people were killed and an unknown number injured in the accident at Moscow’s Sheremetyevo Airport on Sunday. The aircraft was almost fully engulfed in flames by the time it had rolled out. The aircraft had just taken off on a flight to Murmansk with 79 people on board. Initial reports said an inflight engine fire occurred early in the flight but the video clearly shows the fire started on the ground.

The aircraft erupted in flames in full view of the main terminal and Russia’s main investigative bureau has been called to investigate. The crew reported a lightning strike shortly after takeoff and returned to Moscow. There were reports the crew aborted one landing attempt and the accident happened on the second try. After the aircraft stopped, passengers jumped to safety on the front emergency slides and fled from the runway. Some of them were carrying baggage. The Superjet 100 has been in service for eight years and Aeroflot is the main operator. About 300 are in service. As alarming as the video shot from outside is (first video), the 21 seconds shot by a passenger is even more frightening.