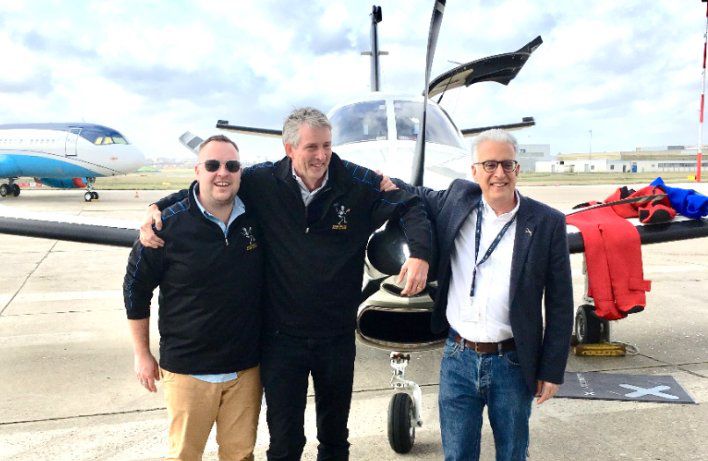 Dierk Reuter and Phil Bozek used their Daher TBM 930 to beat a 34-year-old speed record on March 9, averaging 364 knots between Westchester County Airport (HPN) near New York City and Le Bourget Airport in France. Their 8-hour, 37-minute flight beat a record set by Chuck Yeager in 1985 in the C1e class for turboprop aircraft with a takeoff weight under 13,200 pounds. He made the trip at an average of 325 knots.

To make this trip, the TBM 930 was fitted with custom fuel tanks that doubled the its standard 300-gallon capacity and required a takeoff weight of 9200 pounds, some 1800 over standard. (As is common, the aircraft had a waiver to operate above the manufacturer’s max weight.) The flight consumed 520 gallons of Jet A.

Although the record flight was delayed by two hours due to heavy frost at Westchester County, the pilots said it was largely uneventful. “After encountering moderate winds during the first part of the trip, we experienced very favorable winds later, which propelled us at astonishing groundspeeds up to 458 knots,” said Bozek.

The flight was more than a year in the making for TBM owner Reuter, a Chicago-based global finance expert with 4500 hours, who had owned a TBM 850 version for nearly 10 years. At 31, Bozek, a Michigan-based real estate investor, is said to be the youngest owner of a Daher TBM.