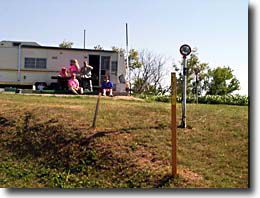 Picture yourself at the skinny end of a funnel. You have to decide how much of what went in the fat end gets tocome out the skinny end, and in what order. Now imagine that airplanesare what went in the other end. All kinds of airplanes. From cabinclass twins to tiny single-seat experimentals. Controllers havenightmares like this after eating spicy foods right before bed.That’s what it’s like to work at Fisk.

Fisk is a temporary ATC facility located in a housetrailer about eight miles southwest of OSH. Four controllers withnerves of steel and great spotting skills use a radio and binocularsto sequence the airplanes into a single file line that initiallyfollows the flashing strobes to Fisk then follows the railroadtracks east to land on whichever runways are active at OSH. Chicagoand Atlanta may battle it out 364 days a year, but it’s hard toimagine a busier bunch of controllers than the team at Fisk onthe day before OSH opens. From 1000 to 1100 this morning, Fisksequenced 149 airplanes. That’s an average of two and a half airplanes aminute.

Sometimes airplanes arrive at Fisk already havingformed a nicely spaced single file line from Ripon. More oftenthey arrive in random clusters and Fisk has to bring some order to the group. Pilots monitor the Fisk frequency and every single airplane getstalked to and given a preceding airplane to follow. The controllersat Fisk keep up a non-stop litany of instructions and pilots acknowledgethem with a rock of the wings. If standard AIM radio phraseologywere used, the flow would be cut at least in half. It’s the waythings have been done at Oshkosh since almost forever and it worksgreat as long as the surrounding area is at least a thousand andthree.

Work As A Team 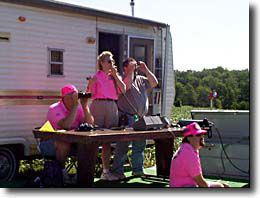 They work as a team. First an approach spotter callsout the color and type of the approaching airplane. Next the radioperson gives the traffic instructions. Then another spotter verifiesthe wing rock acknowledgment as the airplane passes over Fisk.Each job requires a different talent. The first spotter needsgood airplane identification skills. The radio person needs goodlungs and a strong voice. The departure spotter has two jobs:verifying the wing rock and coordinating with Oshkosh tower. It’sfairly light duty until an airplane fails to acknowledge a call.Then the departure spotter has to alert the tower that they mayhave a NORDO (ATC lingo for an airplane with no or lost comm)in the inbound mix.

Most of the time the approach spotter I watched wasright on the first try, which is pretty amazing considering thatthe only profile he saw was the front of the airplane as it approached.He didn’t always get it right the first time, though, and sometimesthe radio person has to try something else to verify contact.Here’s a sample from this morning. The spotter called a grey taildragger,a red and white Cessna, a yellow Quickie, and a blue Bonanza.

Radio Person: “thanks for that rock, followthe Cherokee ahead, have fun at Oshkosh”

Radio Person: “thank you, follow the taildraggerahead, welcome to Oshkosh”

Radio Person: “thanks for that attempt to rock,follow the red and white Cessna ahead” 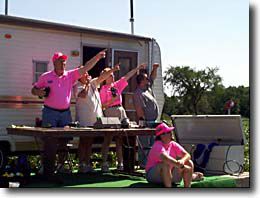 Watching the controllers at Fisk work the trafficreminds you of the “Lucy” episode in the chocolate factory,but they don’t have the option of stuffing Bonanzas in their mouths.Their only out is to hold airplanes. When OSH tower gets temporarilyoverwhelmed, the phone rings at Fisk and the controllers startholding airplanes over Rush Lake. Sequencing airplanes at thisbreak-a-sweat pace is a challenge for the Fisk controllers andyou can hear a tinge of disappointment in their voices when theyhave to hold airplanes. One trip around the perimeter of the laketakes about nine minutes and that’s usually all it takes to workout the flow at the airport. Then the funnel starts to fill upagain.

By the time they get to Fisk, pilots are so conditionedto radio silence and following the airplane in front of them thatit’s kind of hard to get the hold started. It took a few requeststhis morning before a twin broke off into the left turn and ledthe parade.

Sometimes things don’t go quite so smoothly. Thismorning an Ercoupe was asked to join the parade around the lakeand mumbled something about minimum fuel. When he came over thetrailer the Fisk controllers spotted him in the crowd, let himthrough, wished him luck, gave a landline heads-up to the tower,and went back to the job at hand. (The Ercoupe landed safely atOshkosh.) 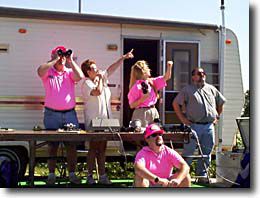 You might think that sending controllers into thislion’s den is some sort of penance for having committed some awfulsin against the FAA. Nope, it’s actually a coveted job. EveryNovember the Great Lakes region of the FAA sends out 320 bidsfor working the extra traffic of EAA’s AirVenture Oshkosh. Sixtythree lucky souls are chosen from the pool, plus the controllerof the year from this year’s Sun & Fun. (this year’s controllerof the year from AirVenture Oshkosh automatically wins a spoton the Sun & Fun team for next year.) Each day the crew isorganized to contain a veteran, a controller with limited experience,a rookie and a team leader. Because it’s such a unique, challengingexperience for the controllers, each of them wants as much timerunning the gauntlet as they can handle.

Operating out of a trailer can make the job interesting,too. Fisk veterans remember the squall line that passed throughin 1995, nearly wiping Fisk off the map. But, like the pilotswho camp at OSH, they just hunkered down in the trailer and sequencedwhat few intrepid souls there were still willing to fly in thatweather.

So if you’re west of OSH and you’re on your way toAirVenture Oshkosh, or if you’re planning for a trip next year,remember the hard-working folks in the hot pink shirts at Fiskas you pass over those strobes. When they ask for the wing rock,rock ’em like you mean it.