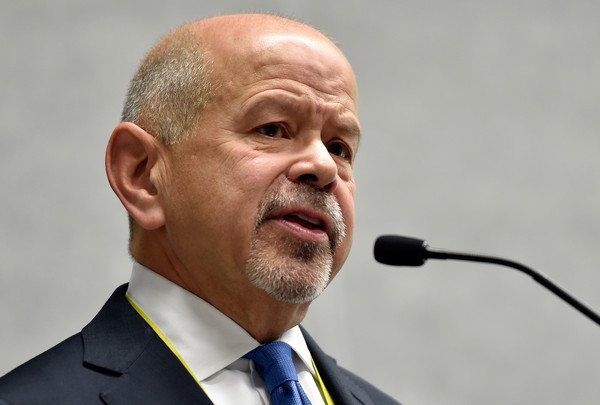 The FAA will stand up a new advisory committee for the drone industry beginning sometime this summer, FAA Administrator Michael Huerta said on Wednesday. Speaking at the Association for Unmanned Vehicle Systems International in New Orleans, Huerta said the committee will be modeled after a similar panel organized to funnel industry opinions into the emerging NextGen system. Huerta said the NextGen Advisory Committee has 30 members from industry, most so-called stakeholders who have an interest in NextGen development issues.

The Drone Advisory Committee, which Huerta said will eventually get its own discrete name, will be headed initially by Intel CEO Brian Krzanich. In addition to being a pilot himself, Krzanich oversees a company that has made significant recent investments in unmanned technology. Huerta said the composition of the committee will be announced later, with RTCA serving as the point of contact and oversight.

When AUVSI host Miles O’Brien asked how the FAA responded to recommendations made by the NextGen committee, Huerta said it did so by re-ordering priorities. He gave two examples: emphasis on performance-based navigation and datacomm for transmission of air traffic instructors and other flight critical information. “This has worked very well with the NextGen committee. We need to work with our stakeholders to establish priorities and hold each other to them,” Huerta said. When asked if the FAA can ever get ahead of the rapid pace of unmanned vehicle innovation, Huerta said, “I don’t think we can get ahead of it, but we can engage with the industry.”

When asked by audience members via Twitter for specifics on the release of the new FAA Part 107 regulations for small UAS, Huerta said he expects the regulation to appear in late spring, which we take to be within the next three to five weeks. However, he demurred when asked when operators could actually fly under the new rules. He did say, however, that when the final regulation is in place, operators will be able to fly largely without reverting to the cumbersome Section 333 certificates of approval. Operators have complained about both the complexity and time required to obtain 333 approvals.

With the FAA predicting as many as 7 million drones sold annually by 2020, O’Brien couldn’t resist asking Huerta if the FAA views the entire industry as a headache or an opportunity. “It’s both,” he said, “Everyone sees this as a game changer.” Huerta said the sheer number of drones and the wide variety of applications will force the agency to keep up and the only way it can is my soliciting industry input.