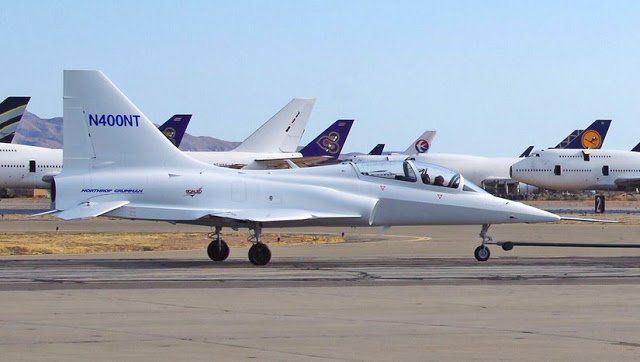 Northrop Grumman has rolled out its clean-sheet contender for the Air Force’s advanced trainer competition. The unnamed aircraft looks a lot like the T-38 it will replace but will have all the advanced electronics the Talon doesn’t. The Air Force says the T-38 is no longer an effective fighter trainer for pilots who will be flying fifth-generation fighters and is buying 300 jet trainers. The Northrop Grumman offering saw light of day for taxi tests at Mojave Airport in California. It was built by company subsidiary Scaled Composites, which is based in Mojave.

The aircraft has a single GE F404 turbofan engine with wing root inlets. BAE Systems and L-3 Communications are filling the avionics bay, which is in many ways the heart of the aircraft. Other contenders for the contract are Raytheon-Leonardo’s M-346, Lockheed Martin’s T-50 and Saab-Boeing with a still-to-be-unveiled clean-sheet design. All of the aircraft will have a sustained turn rate of 6.5 G, air-to-air refueling capability and at least 10 percent better fuel economy than the 1960s-vintage T-38.