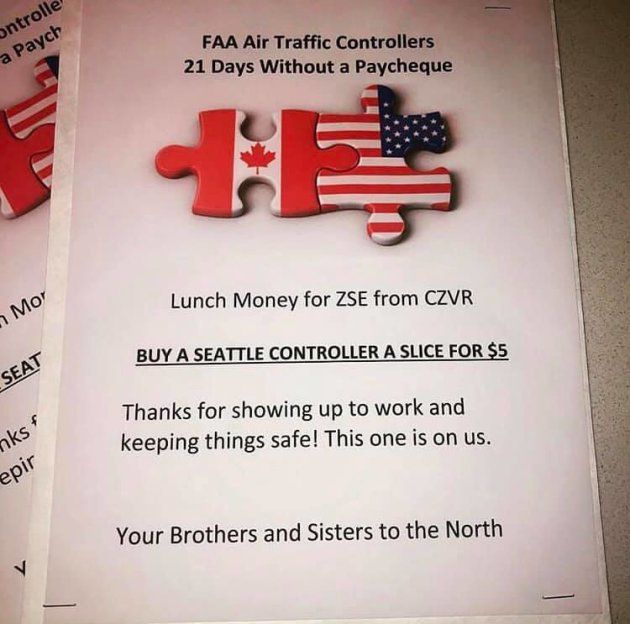 In a show of solidarity with their unpaid U.S. counterparts, Canadian air traffic controllers ordered pizza for FAA controllers at facilities across the U.S. over the weekend. It started with controllers in Edmonton, Alberta buying pizza for the staff in Anchorage. The movement quickly spread and by Sunday, every Canadian ATC facility had been paired with one or more U.S. tower or center to supply some free meals for them. Many of the paired centers work closely with one another handing off aircraft between them but others, like Kelowna and Reno, are far removed from each other but shared the same sentiment as those in Vancouver.Vancouver controllers posted a photo of a sign urging staff to chip in $5 each for the gesture to thank U.S. controllers “for showing up to work and keeping things safe.”

The gesture caught the attention of controller forums and websites and Toronto Center controllers explained the rationale. “As a gesture of solidarity with our fellow American controllers, we will be sending pizza to the Cleveland Center controllers for dinner,” the Toronto controllers said in a post. “They are in the middle of the government shutdown and as of yesterday did not receive their pay cheques. All the ACC’s across the country will be buying pizzas for their adjacent centers.” Doug Church, a spokesman for the National Air Traffic Controllers Association said the membership was overwhelmed by the generosity of the Canadian controllers and expressed thanks on their behalf. Meanwhile, anonymous donors have joined the effort, some chipping in as much as $500 to keep the effort going. Canadian controllers say they’ll keep the pizzas coming until the U.S. controllers are back on the payroll. A three-week government shutdown has resulted in 800,000 essential workers across the U.S. working without pay.