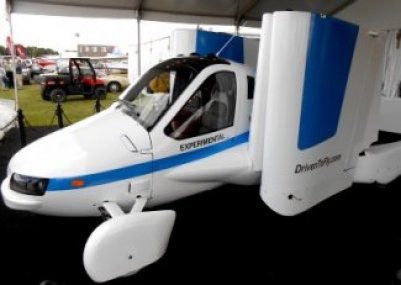 Terrafugia has requested an exemption from the FAA to allow its Transition roadable aircraft to weigh up to 1,800 pounds and have a stall speed of 54 knots and still be classified as an LSA. The LSA rules set the maximum weight at 1,320 pounds and a maximum stall speed of 45 knots. “I think we make a very strong argument that these changes are in the public interest,” Terrafugia CEO Carl Dietrich told AVweb on Tuesday. The added weight is necessary to meet national highway standards, Dietrich said, and those features add safety to the airplane, not only by making it more crashworthy, but also making it more likely that pilots will land in marginal weather and choose to drive instead of pushing forward to their destination.

The higher stall speed, Dietrich said, is a function of the higher weight. He added that in practice, Transition pilots tend to fly the pattern at a speed fast enough to provide a comfortable margin above stall speed. The Light Aircraft Manufacturers Association has filed a letter (PDF) in support of the change. “We believe that granting Terrafugia’s request for exemption would be a wise decision that is in line with the original intent behind the FAA’s creation of LSA (see FAA-2001-11133) as helping to accommodate new concepts in light, sport aircraft,” wrote LAMA President Dan Johnson. “Terrafugia’s Transition certainly qualifies as a new advancement by virtue of both its road-going functionality and improved crashworthiness.”

Icon won a 250-pound weight exemption from the FAA last year for its amphibious LSA, to enable the company to incorporate spin-resistant features, and Terrafugia previously was OK’d for an additional 110 pounds, in 2010. “Our engineering team made its best effort to refine the design of the safety systems to fit within the allowed extra weight, but it was not sufficient to achieve the desired level of safety,” Dietrich wrote in his petition (PDF) to the FAA. Dietrich told AVweb he wasn’t aware of any previous examples of the FAA granting an exemption on the LSA stall speed. The FAA is accepting comments on the petition until Jan. 20.