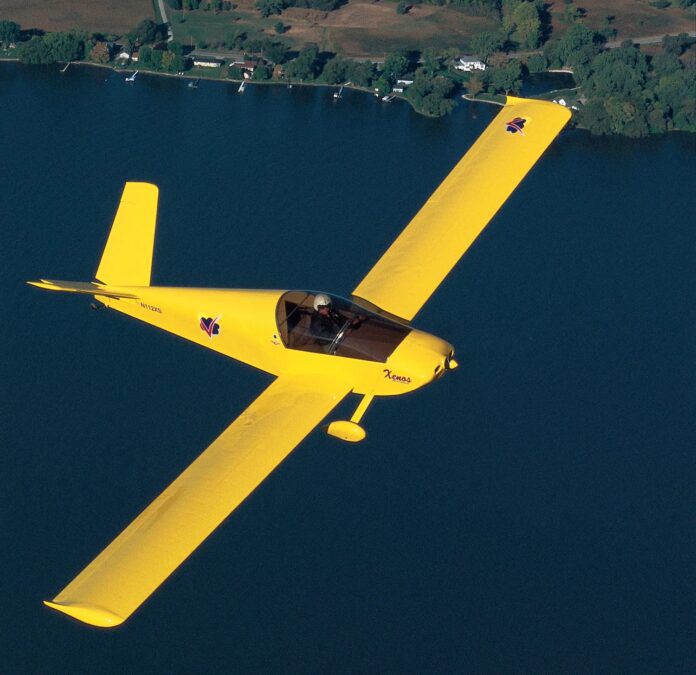 I have often written that before you start building an airplane, you should set your requirements: What is the airplane designed to do? What design satisfies that goal? How does it need to be equipped to perform that mission? Once you have decided on a project for a specific mission, it is important to keep those initial requirements in mind every step of the way with every decision you make. Ignoring this process is a way to set yourself up for a project that never gets finished because of mission and cost creep—it has demonstrably kept many homebuilders from achieving the goal of flight.

So it might seem odd that my wife and I decided on a very radical “left turn” with our current project. You see, we have had a Xenos motorglider project with an AeroVee powerplant gestating in the shop now for about six or seven years. I don’t usually let projects stretch out like that, but the truth is that we have other planes to fly and maintain, and the Xenos was chosen to basically give us something in the shop to work on when we have time. And to generate article ideas for KITPLANES magazine and the various websites to which we contribute. In other words, we didn’t really have a schedule or a plan for when it needed to be completed. All we wanted was a recreational motorglider to fly when we weren’t planning to go anywhere—and we didn’t want to invest a great deal of money in it.

Well, things suddenly changed when I got the chance to evaluate and write about a unique project on the California coast—a Xenos powered with an electric motor and battery unit from a Zero motorcycle. I have been watching the development of electric aircraft for many years, and it has been a slow process, with lots of false starts and little success when it comes to a true, usable sport plane. It is hard to get enough performance or endurance to make an airplane that can do more than make a trip around the pattern a few times. But applying electric power to a motorglider is a very practical solution to the endurance issue—and motorgliders are not expected to go terribly fast! A motorglider needs power to take off and climb to an altitude where you can shut down the engine and go hunting for lift—and electric is perfectly suited for that mission.

There have been a number of electric motorgliders developed to date and many of them are practical as self-launch competition gliders. They are, however, expensive and generally have not been in the realm of the average homebuilding project. Factory machines with lots of R&D behind them have limited their spread into the flying world. But the Xenos is an inexpensive airframe kit, and the Zero motorcycle powerplant is, if not cheap by VW motor standards, extremely affordable when you compare the purchase price to the average aircraft engine. Yes, you buy a motorcycle for the propulsion and throw the frame away, but it is still a lot cheaper than a Rotax or Lycoming.

So how did we come to the decision to make the switch to electric power? Like everything we do, we followed a process of evaluation. We looked at cost, complexity, safety and suitability to satisfy our goal.

In terms of cost, the electric option will probably end up at twice what the AeroVee has already set us back. But compared to the Lycomings on our other aircraft (and the jet engine on the SubSonex), both the AeroVee and the electric options are quite reasonable—and within our budget. It shouldn’t be forgotten, however, that significantly modifying a homebuilt can directly affect its resale value. Making something unique does not always increase its value. In fact, it can sometimes make it very hard to sell. Again, the beauty of the Xenos is that it represents a reasonable investment—it was designed to be affordable, after all. And resale is simply not on our list of concerns.

In raw numbers, we expect the electric option to cost somewhere between $12,000 and $18,000, depending on how much we have to pay for the donor motorcycle and what it will cost to fabricate things like a motor mount.

The complexity of the conversion is something that is important to consider anytime you deviate from the plans with an aircraft project. While the electric option might seem complex, the truth is that the power system is mostly a bolt-on design, with very little effect on the airframe behind the firewall. The most significant fabrication is probably the custom motor mount, and when it comes to learning enough about electric propulsion to make the system work, we have the designer of the original electric Xenos as an advisor and mentor. Finally, I have worked on very complex aerospace vehicles all of my working life and have figured out how to learn their intricacies. So as much as it can, the project seems reasonable.

How about safety? In talking about this project to others, I hear two different concerns about the safety of an electric Xenos versus the standard internal-combustion aircraft. The first has to do with reliability: Do we believe that the electric motor option is as robust as the AeroVee version? While I don’t have numbers to cite one way or the other, I can say that after talking with numerous AeroVee owners and reading accounts of others, the IC option is a bit finicky to get right. There can be a fair amount of twiddling with the carburetor, ignition and cooling systems at first, but once those are sorted out, the engine seems to do a good job for most. That said, most of those inputs come from pilots who are using the engine on a regular Sonex or Waiex, and none of those pilots shut the motor down in flight and restart it, as we would with the motorglider. For us, an important question is: How well does it relight when required? There is not a lot of experience in that regard—but there are Xenos pilots who do it.

In terms of the reliability of the electric option, the electric propulsion system generally works unless something comes disconnected—and there really isn’t anything that can come disconnected in flight if you have built it to decent electrical wiring standards. So “engine” (ah, motor) reliability and the ability to restart in flight should be very good. Remember that there is actually no real “idle.” If you pull the throttle all the way back, the motor and propeller stop. Push it forward again and it starts turning. There is simply nothing else to fiddle with, and the fewer items in the chain, the fewer chances for failure.

Is That A Duracell?

The other safety comment concerns that 180-pound lithium battery. Everyone likes to talk about a YouTube video of a Tesla battery fire and point out that those batteries can really burn. Well, yes, if you damage them enough. But the Zero motorcycle has a pretty much spotless record in service with regard to fires—there just aren’t any reliable reports of such events occurring in the real world. The other thing to consider is that you are hanging that lithium battery on the motor mount, forward of the firewall. This is replacing the standard gasoline fuel tank mounted behind the firewall in the internal-combustion version of the plane. So the question is, if a fire in the energy-storage device were to occur, would you rather have it forward of the firewall or in your lap?

Finally, we come down to suitability of mission—do the electric options satisfy what we want to do with the airplane? Our planned standard Xenos mission is simple—take off, climb to an altitude and area where we can find some lift, shut down the motor and go soaring for a while. When we’re tired of it, head back to the home field and land. Since we live just over a small ridge from Minden, Nevada, one of the soaring capitals of the American West, we have expectations of reasonable lift. Even though the Xenos is a low-performance sailplane, we should be able to get some free rides from thermals or ridge/wave lift. If we found ourselves low on energy to make it home, well, that is what the motor is for! The electric option gives us that capability and so satisfies the requirements.

How about endurance? With the AeroVee engine, we probably would have about a three-hour “engine on” capability. We could even use the engine to ferry the airplane down the Eastern Sierra to a number of fields on our way to Southern California if we wanted to. It would be a long day, but it’s possible. With the electric option, we have probably an hour of “engine on” time, which makes ferrying more difficult but not impossible. The problem, of course, is that you have to have a place to plug it in while you sit and wait for the battery to charge. If the place has 220 volts available, you can charge in an hour and a half. If it’s 110, better find a hotel for the night. But realistically, is the ferry mission necessary? Most soaring is done locally, with gliders transported by trailer. The Xenos would not be an easily trailered beast, but it’s also not something we would be taking to competitions. It is a recreational airplane for going up and enjoying a little quiet time in the air. And for us, the electric satisfies those needs. Everyone’s needs will differ, however, so everyone has to make their own decisions.

The last thing to consider is what we would call in the aerospace industry “programmatic risk.” In other words, how likely are we to satisfy our goals versus dumping a lot of money into a project and having no results at all? This is always a concern, whether you’re talking about a garage project or a multi-billion-dollar space program. No one likes to invest time and treasure into a project that doesn’t go anywhere unless the potential rewards are worth the risk.

In this case, going electric on the Xenos is, for us, not really a financial issue. The entire project is pretty inexpensive when it comes to adding up airplane money. If the absolute worst were to happen and we created a non-flyable monstrosity, we would still have not appreciably altered the airframe in any way—just redone the components firewall forward. In fact, all of the items that we had mounted on the firewall for the AeroVee engine that were removed could simply be replaced since we plugged the firewall holes.

But it is a consideration for someone operating on a budget, trying to get an airplane flying for as few dollars as possible. Going out on a limb with unproven technology is always a bit of a gamble, and everyone has a different risk/reward line. One thing that makes this a much better bet is that there is already one flying, and it was built by a first-time aircraft builder (albeit one with extensive electric propulsion knowledge). We’ve gone through Gabe’s excellent picture archive and understand all of the steps to get from motorcycle to flying powerplant, and don’t see any showstoppers—so long as Gabe isn’t hit by a bus, because he has (apparently) the only programmer in captivity to make a few firmware adjustments needed in the controller. But that’s a fairly low risk and one we are willing to take.

So we’ve decided—the Xenos becomes an eXenos, and you can follow along as we “go electric”!

This article originally appeared in the August 2022 issue of KITPLANES.