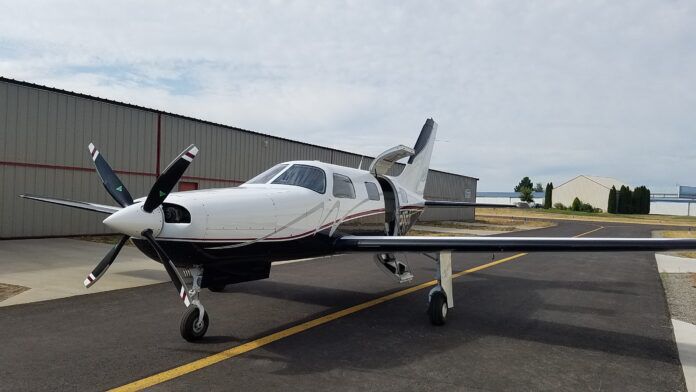 For some, Piper’s PA-46-series is the ultimate step-up piston single. It’s a serious IFR traveler, and the Malibu and Mirage can do 200 knots in pressurized comfort. With many to choose from at varying price points, these airplanes are far from inexpensive to own and operate, plus they can be unforgiving in the hands of pilots who don’t take training—and maintenance—seriously.

When the Piper Malibu prototype emerged, it was much better than any single around. Part of the appeal was the right mix of performance and cabin luxury, as passengers liked it as much as pilots did. There’s also no shortage of business-airplane styling. It stands tall on its gear and has a 43-foot wingspan and air stair cabin entry. First came the 310-HP Continental TSIO-520-powered PA-46-310 Malibu starting in 1984. In 1989, Piper introduced the Malibu Mirage with a twin-turbo, twin-intercooled Lycoming TIO-540-AE2A of 350 HP. The new engine weighed 113 pounds more, but the maximum takeoff weight was boosted by 200 pounds. But the Mirage wasn’t exactly an airplane for care-free upkeep.

Owners of early Mirages dealt with Lycoming’s massive crankshaft recall of 2002 and 2003, suffering months of downtime. Engine reliability for some hasn’t exactly been good, though the airplane is such a good glider thanks to those long wings that many events didn’t become an NTSB report because the pilot was able to land safely on an airport. Our most recent survey of accidents showed that 21 percent were engine-related—a pattern that’s been consistent. We’ve worked on and flown enough PA-46 models to know that it’s not an airplane that’s tolerant of lax maintenance. The Mirage, however, was a better airplane—something Piper kept rolling to this day with the M-series PA-46 models.

When Piper introduced the Mirage, the hydraulic system and cabin door were improved, the engine cooling system was redesigned (a good thing for the fire-breathing Lyc), the seats were strengthened and the flaps were changed from hydraulic to electric operation. It also got some big-airplane-type features, including a dual-bus electrical system, internal windshield deice, standard dual alternators and vacuum pumps and an auxiliary heater for the cabin. The later Mirage eventually got Garmin’s G1000 integrated avionics to replace Avidyne’s Entegra suite. In our view, the best thing to ever happen to the Malibu’s cockpit is Garmin’s GFC 700 integrated autopilot. Some came out of the factory with S-TEC 55 autopilots, which proved to not be a good match. Earlier airplanes have BendixKing equipment, including the KFC200 autopilot. Many PA-46 models now sport the latest and greatest retrofit avionics.

Malibu pilots report cruise speeds of 205 knots TAS as FL220 at 67 percent power and 210 knots true at FL250 at 75 percent. While Mirage pilots may pay more at the gas pump, they also are able to go a little faster, with typical speeds in the 220-knot range at FL230-250 at 75 percent power burning 18.8 GPH. The Matrix is pretty much a Mirage without a pressurized cabin. To go high, you’ll need nose hoses and O2, but the tradeoff is slightly less maintenance and operational simplicity, although later Garmin G1000 models handle the cabin pressurization/environmental chores.

Owners of both models say they can fly 1100-nautical-mile trips with IFR reserves. More than one Malibu and Matrix owner has told us it’s a joy at any altitude, although we’ve found the control forces somewhat heavy, and the airplane doesn’t exactly leap off the runway. Once the speed builds in flight, the controls are responsive, with pitch the lightest and roll the heaviest. Many pilots will attest to it being an autopilot airplane, and that’s really how it should be flown.

Wreck reports show that many PA-46 accidents occur during landing. There isn’t necessarily anything particularly difficult about landing these beefy singles, but the long wing encourages floating and when lightly loaded, the CG is forward. The key is to slow it early (some have speedbrakes) and nail the speeds into the flare.

Caring for a PA-46 can be intense, with alternators, vacuum pumps and the exhaust system all being popular items on the shop invoice. Older models may have pressurization and air conditioning issues. Moreover, the Malibu is not an airplane that just any shop can fix, and we don’t recommend bringing one to a shop without PA-46 experience.

“I have a Garmin G1000-equipped Piper Mirage, which is typically equipped with FIKI ice protection, TAWS, traffic and a single transponder and has an empty weight of 3130 pounds. The book power settings are bogus. Even Lycoming recommends a 65-percent power setting for cruise that is 100 degreed ROP and not to exceed 1650 degrees TIT. For me, this results in a fuel flow of 20.5 GPH compared to the 18 in the book. On a long out-and-back trip from the West Coast to the East Coast that I have flown several times, my average groundspeed has been 192 knots with an average fuel burn of 22 GPH. This includes one 800-nautical-mile leg typically made at FL230-250 and one or two shorter legs both ways, made at 16,000 feet,” said owner Matt Hanson. “It’s a great family aircraft and great for business use with one or two others. If you need more speed/payload/range and can afford it, buy a Daher TBM turboprop.”

There is a wide range of PA-46 models to choose from, and all of them are up in price. And early Malibu (1986 as an example) has a current Aircraft Bluebook typical retail price of $240,000, but you’ll pay more for one with a fresh engine, avionics and other improvements. The engine overhaul alone will be a $60,000 hit.

Newer PA-46 Mirage models (the M350 came out in 2015) are premium priced, typically retailing for around $950,000. A mid-2000s model that’s nicely maintained typically retails for around $600,000. Non-pressurized Matrix models (PA-46R-350T) are easily $500,000-plus airplanes. There’s also the DL/DLX JetProp conversions, which lengthens the snout for Pratt PT-6A-21 and -35 turboprop engines. Plan on a DLX cruising at 260 knots true at FL270. Before shopping for any PA-46, check in with your insurance underwriter. Many are demanding intensive training and other requirements for less-experienced and also aging pilots.