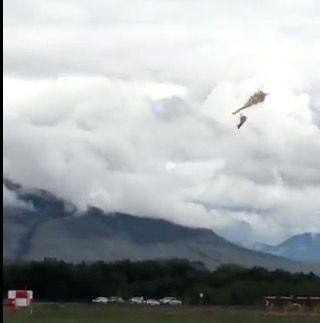 Capt. Jennifer Casey, the public affairs officer for the Royal Canadian Air Force Snowbirds has been identified as the crew member who died in the crash of one of the air demonstration team’s CT-114 Tutor jets. Capt. Richard MacDougall, the pilot of the aircraft and one of the coordinators, was seriously injured when the aircraft crashed into the yard of a house near the airport in Kamloops, British Columbia, late Sunday morning. The aircraft was one of two that took off together about 11:40 a.m. A video on Twitter by Shannon Forrest shows the aircraft pitching up sharply on takeoff before entering a spin that ended in a residential area in the city of about 100,000 in southern B.C. The video shows at least one ejection from the descending aircraft. MacDougall landed on the roof of neighboring house and was injured but the injuries are not believed to be life threatening. Two elderly occupants of the house hit by the aircraft were reportedly uninjured. It’s not clear if anyone else was hurt. The house was destroyed. Weather was reported as partly cloudy with scattered showers.

The Snowbirds were embarking on the final leg of their Operation Inspiration cross-country tour paying tribute to front line and essential workers battling the COVID-19 pandemic. The team had performed over Kamloops on Saturday and were due to travel to Kelowna, about 100 miles southeast, for flypasts there and in neighboring cities but low ceilings and rain prompted a change of plans. The team was instead headed to Comox, a Canadian Forces Base on Vancouver Island, about 200 miles west, when the plane crashed. It’s the second crash of a Snowbirds aircraft in less than a year. Last October, during warm-up for the Atlanta Air Show, a Tutor jet suffered an in-flight mechanical issue and the pilot safely ejected with the aircraft crashing in an unpopulated area.

An earlier version of this story stated that the video showed two ejections but authorities have only confirmed one ejection from the aircraft. The video shows two explosions but one appears to have been the jettison of the canopy before the pilot punched out.