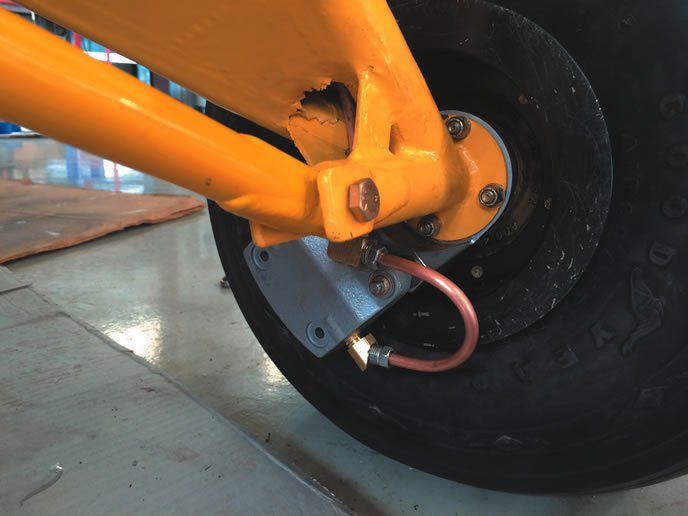 People like me who are too cheap to buy airplanes made in the current century and which have tailwheels are occasionally heard to remark that only real pilots fly taildraggers. And within that excruciatingly parsimonious cohort is an annoyingly sacrosanct subset who say real taildragger pilots don’t use and therefore don’t need brakes.

Neither of these things are true and as for the brakes, I surmise that it got started because to fly tailwheel airplanes, you really have to use your feet. There’s no cheating on this. And, evidently, this morphed into the belief that your feet get so skilled that they can bail you out any possible jam you might get into merely by applications of judicious rudder. Airplane on fire? Rudder. Lost over the Amazon? Rudder. Two inches of ice on the leading edge? You know what to do.

These things are not true either and from reader Peter Bentley comes a funny story proving as much. Bentley is involved in a shop in the UK specializing is Luscombe repairs and restorations. Here’s the story:

“Customer rings up and enquires about getting his bent Luscombe fixed. One of the group owners had landed high and fast and found himself running out of farm-strip runway.

Customer: The aeroplane ended up in a hedge.

Customer: The left brake didn’t work and it swung off the runway into some trees.

Me: Any idea why the brake failed?

Customer: It hadn’t worked for a long time. We never use the brakes.”

This will sound quite familiar to anyone who flies old taildraggers. It would be folly for me to pretend it never happened to me. A few years ago, we converted the Cub’s ancient expander-tube brakes to modern Grove disc brakes. Because we retained the original master cylinders, they work better but not exactly so well that you could ever flip the airplane up on its nose, as you can with the brakes on a Legend or a Carbon Cub.

We did this because I got tired of fussing with the expander tubes, mainly trying to keep them bled well enough to offer at least imaginary braking effect. One day after months of knowing the right brake barely worked, I taxied into the hangar alley way and nearly clipped one of the airplanes in the sunshade hangars across from us because…I needed a stab of right brake. Enough. A purist I ain’t and I don’t need to actually taxi with bad brakes to understand that 1930s technology is curious but hardly charming.

When I was explaining this to another veteran taildragger pilot, he seemed disappointed at my thinking and launched into a heartfelt argument that having bad brakes or no brakes at all actually made you a better pilot. The reasoning, of course, is that it forces you to plan more carefully and never land too long or too fast and to stay on the bubble when taxiing.

The reality of taildragger flying is that you don’t often need brakes. But when you do need them, you are likely to need them badly, which is why I kinda like having them working. That way I can, you know, not use them even though they’re there. Think of it as real taildragger pilot lite.

This being the case–and as in the story Peter told–deferring brake maintenance is understandable. But not recommended. Not that I haven’t deferred a thing or two myself. I think I could have gotten another annual inspection and six months out of that $330 right tire, but I replaced it anyway ahead of the annual. I’m deferring replacing the motor mounts and repainting the bracket because I’ll have to remove the engine to do that. That’s easy in a Cub, but removing and scaling the mount is a day’s work I’ll save for winter. Assuming the brakes still work and I haven’t piled the thing into a hangar.

For the current survey we’re running on ELTs, I got two e-mails raising the issue of privacy. Readers are rightly suspicious when anyone asks for personal information. So am I.

We do it in surveys because we occasionally contact readers for additional information and if I’m going to use a quote from someone, I want to know who it is, even if we don’t publish the name. In my experience, total anonymity sometimes promotes a wild-eyed nastiness better suited to the old news groups. This is why we ask for actual names in the comment field on blogs and news stories.

I occasionally use a quote without a name, but not if I don’t know the person who provided it. In the press these days, we get bashed for unnamed sources. I get that, too. So I try to minimize its use.

As far as our promise not to use this data for other than the survey, I ask that you trust us. If you’re a subscriber, we already have your personal information and we neither sell it nor spam you. We don’t intend to break that promise.