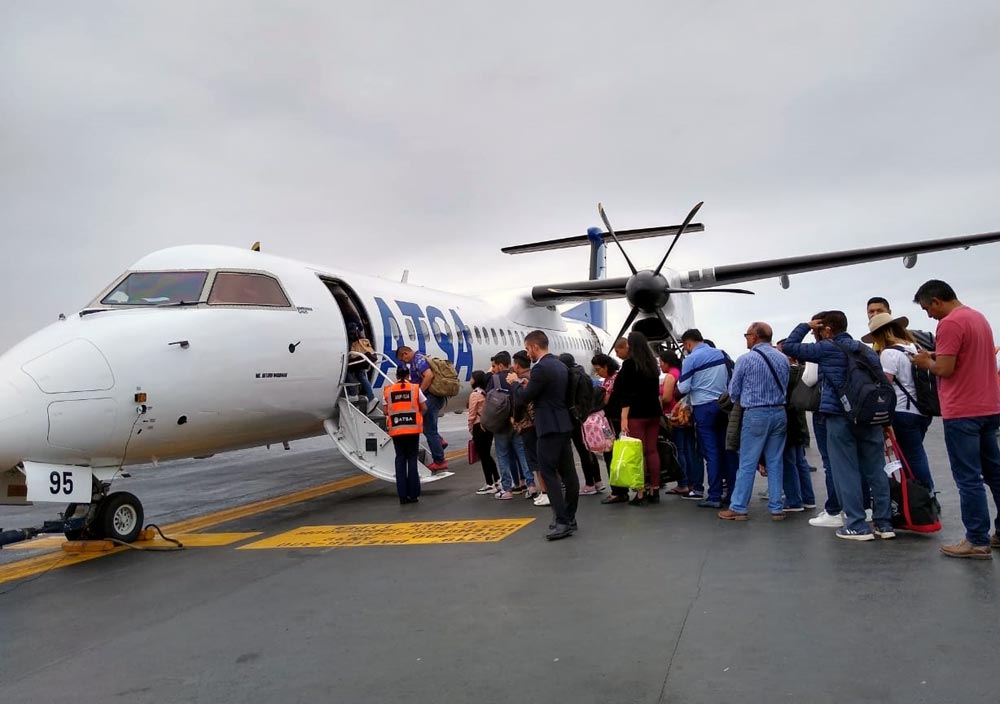 The COVID-19 pandemic has struck no industry harder than aviation and the airlines. In the U.S., domestic load factors and flights are a fraction of their levels just a month ago. International travel has been similarly devastated, stranding many travelers for weeks, if not longer. Today’s blog details the experience of contributor J. Scott Dyer and his wife, Kathryn, both of whom are finally home after a harrowing stay in Peru.

All went to hell in a handcart for us as we teetered off the overnight bus from Chiclayo to Chachapoyas in Peru at 7 a.m. on March 16. We weren’t ready for the “have you heard the news” from our guide in Chachapoyas. The country was closing all borders at midnight, no commercial travel in or out of Peru from that time on. And, no travel within Peru. “You’ll have to stay for at least 15 days where you are at midnight.”

We’d been on a 2 1/2 week individual journey through Northern Peru, seeing archeological sides dating to 1500 BC and before, and soaking in the culture. Having been in enough Peruvian towns, we saw Chachapoyas as pleasant enough for a couple of days’ stay, but otherwise lacking. Lima was the only international airport in the country. We had to try to make it there. Getting out meant going to Lima. If we were to be stuck in one place, this was a world-class city with great food.

Our guide talked to our travel agent in Lima, a great guy, married to a Peruvian woman who owned the agency, but who grew up in Brooklyn. Somehow, they got us on the one flight from Chachapoyas to Lima before the shutdown, leaving around 11 a.m.

Our guide and a driver took us the 15 minutes to the airport and talked their way into the airport past the guards. First, we found that our one checked bag/one carry-on each—fine for international travel—didn’t cut it on this flight. The weights were additive and low. Too heavy. We spoke little Spanish but the agent and supervisor thought about it and quickly relented, “this one time only.” Next, we found that Kathryn’s ticket data didn’t match her passport number. Another no go? Initially, yes. Once again, the supervisor and agent talked and the problem was ignored. After screening (normal) and waiting for the flight, we were on the way to Lima.

Once there, we stood in hours of lines. Delta (our carrier) was a no-go as the next flight would leave at 0030 local and thus be banned by the quarantine. It was booked anyway. We heard Avianca was out as Columbia in general and Bogota in particular were not available for onward travel. JetBlue, the flight in the afternoon, was already leaving. COPA had no seats through Panama City or elsewhere, and no more flights. No luck on American. Internet was a joke, and calling reservations was at least a 40- to 60-minute wait.

Our agent got us reservations at a hotel in Lima and we became resigned to being stuck in Peru. One of the first shocks was that eating out wasn’t an option: all restaurants were closed and we’d eat only in the hotel. Outside trips were limited to the grocery store and pharmacy. I paid in advance for the hotel though the 15-day period. It was the evening of March 16.

The next day, went to the grocery and updated our U.S. Embassy information. And we waited. And waited. We joined the Facebook group of Americans stuck in Peru. It was invaluable with real-time, boots-on-the-ground information about what was happening in the country. Two days later, our hotel closed and we moved to another down the street. It was a notch or two lower on food scale, but beggars can’t be choosers. We waited.

It was 10 days into the quarantine before the U.S. Department of State got some rescue/repatriation flights going. That was a long time and we worked all the lists we were on, as well as congressional and big-time media contacts. One days’ flights were scrubbed with one American jet making it to about one hour from Lima until returning, and it took a few days at first before State even confirmed that repatriation via government flights was the only way home. I had an April 3 Delta ticket, just in case, but expected the quarantine to be extended. It was. The flight was canceled.  Each minute was spent rushing into the phone to check the latest email. Each minute was disappointing.

At the second hotel, the screws tightened and we were restricted from leaving at all. The police enforced this and we were ultimately eating only in our rooms. Peru fairly quickly also imposed an 8 p.m. to 5 a.m. no-joking curfew, which was later extended to start at 6 p.m. Jail sentences, and shootings, were authorized.

Repatriation flights started on March 25, allegedly for older travelers (we are in our 60s and supposedly qualified), and those with medication or medical needs. No call.  These flights were highly limited as the civil international terminal remained, understandably, closed.

We waited each day for the embassy email, to no avail. Age or medical condition seemed not to matter. More and different forms to fill out.  Congressional presence was helpful; they were doing what they could. Would the new forms cause more delays?  No one knew.

Each day was a trial of boredom, some hope between 4 p.m. and 8 p.m. when the embassy emails came out for flights the next day and being saddened by not getting good news. Embassy emails kept touting how many Americans were getting out but our age and medical condition seemed not to matter while 20- and 30-somethings were joyously home.

Finally, we got an email about departure, on March 30. Ten seconds of joy were ended when we saw that the departure was from Cusco, not Lima, and we couldn’t travel there.

The next day was even more ludicrous. We got notice at 1 a.m. of a repatriation flight but leaving by bus from Trujillo to Lima that afternoon and then on by air. Again, not for us, and Congress and the embassy were contacted. We waited.

March 31 was fraught for us at our longtime hotel. On the night of March 30, a group of about 100 Peruvians were repatriated but they, by government fiat, would be quarantined for 14 days in our hotel. Now, we had about 10 foreigners in our hotel, all planning to leave as soon as possible, but these new Peruvian guests posed an existential problem: If any of them caught the bug, we could all be quarantined with no hope of seeing the U.S. for a month or more. The Peruvians had invoked such measures at a hostel in Cusco with great hardship. We worked with our agent again who got us into a high-priced hotel just across from the Embassy. Perfect.

The problem was how to get to the new hotel with the ever-tightening travel ban.  We had no required travel papers but we feigned a trip to our embassy with a cab driver and we were off. He talked his way through three full battle-dress roadblocks for us. We made it.

That afternoon we received a Facebook message from the embassy that we had been mentioned. Then came the email we had been waiting for, evacuation on the next day, April 1. We lined up outside the embassy and within 45 minutes the staff graciously and efficiently dealt with us. Some worked there, some were spouses.  There were all great.

Buses took us from the embassy to an air base at the northwest end of the Lima airport. All international flights were going through the base, and that meant only a total of eight flights a day for all the world. We had lots of waiting. There was an eight-bus caravan with police escort.

At the airport we were addressed by a Marine colonel and he was a sight for sore eyes. Our processing in a hangar that the Americans had been using was relatively fast. The Marines, Army and Navy knew what they were doing. We each got a seat and were called by rows from the hangar to board the United 777 from the ramp.  That’s a tall aircraft and some with movement disabilities had severe problems. Our embassy and military personnel helped them out.

The crew on our 777 was special. They came inbound from Houston with many returning Peruvians as passengers. They brought their own baggage handlers and mechanics in case the airplane crumped. They were self-contained. One way would have been a normal day for the crews. They doubled it for us. When we left them in Dulles, they were dead tired.

Once onboard and airborne, our meal came immediately and it was very good indeed. The cabin crew was professional and welcoming. They were fine people to see at a time like that. We made it a point to thank them, and the flight crew, on leaving.

We landed at Dulles at 11:30 p.m. local time. Customs was quick with Global Entry and we were on our way to the hotel before traveling onward to home the next day and 14 more days of voluntary quarantine.

There were lots of lessons here and the experience paints a worrisome picture about future international air travel. But the Peruvian people were first rate with us the whole way. The humanity was noticed and appreciated. Same with the folks who helped us at the embassy once we were in line and thereafter. The military people were superb. Peru did us a hardship, but on balance did it right for the Peruvian people.

Now, we’re just glad to be home albeit in an environment more dangerous than Peru. But we’re home.