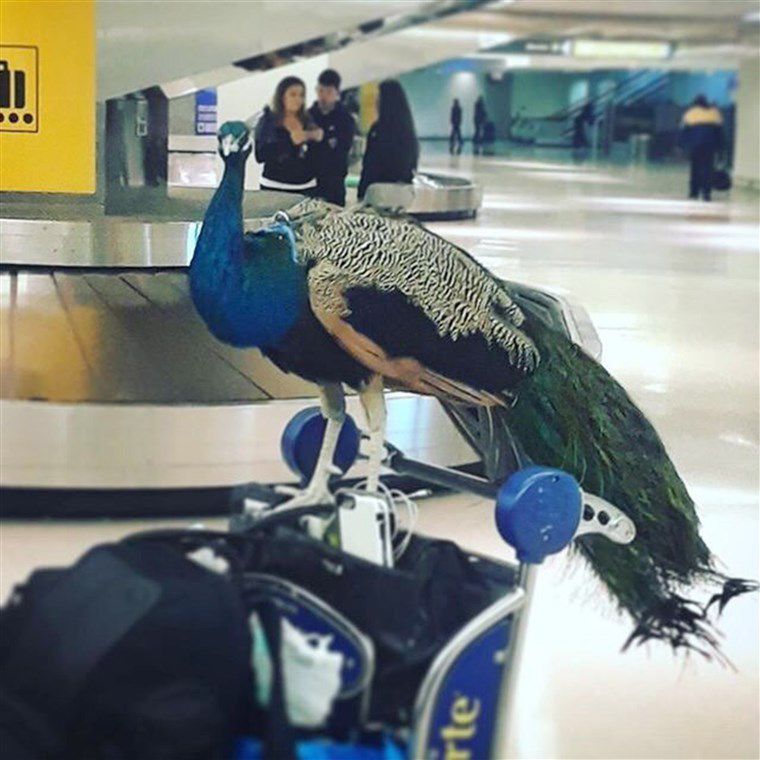 I guess I’ve misunderstood the term “emotional support” as it applies to animals. As any owner of a border collie will tell you, that’s a street that runs one way in the opposite direction for us.

As you may have read in the accompanying news columns, the DOT has ruled against folks who insisted on traveling with the animals they depend upon to make them feel better emotionally. I’m going to go out on a limb and suggest that most of those animals are dogs and I get it. I’m an unapologetic and enthusiastic dog lover and there is no question that our beautiful Sophie is a major contributor to our mental well-being. Whether her absence would cause a recognizable medical condition is doubtful but I’m not here to judge what makes others tick. If petting an animal keeps you from stabbing someone, then pet away. As long as it doesn’t bother anyone, where’s the harm?

But as humans are wont to do, some folks pushed the boundaries. How dragging a pony or a peacock aboard an airliner became a fundamental human right, I’m not sure, but clearly it was an infringement on the rights of others onboard to a safe and relatively hygienic experience. The airline drew the line at the peacock but inexplicably let the pony trot on.

Since that story appeared, we’ve heard from crew members with bizarre stories about the emotional experiences they’ve endured breaking up fights, cleaning up disgusting messes and nursing bites and scratches to protect the rights of those passengers.

So that’s why there seems to be universal support for the common sense rule enacted by the DOT that limits non-human passengers in the cabin to “pets” which can occupy crates underneath seats or to the highly trained and properly registered service dogs that some folks rely upon, which can lay at their humans’ feet. All others must go in the hold.

But having said all that, there is not a hope in hell I would try to travel with Sophie in the cabin of an airliner. Like all border collies, she’s whip smart and anxious to please and I don’t think she would be a problem for anyone else on the plane. I, however, wouldn’t be able to endure the huge guilt trip she would put on me. Sophie likes her couch, and in her younger years, the freedom to roam our rural property and enjoy the freedom of being a country dog. She would hate being on a plane and she’d be even more upset about going in the hold.

A decade ago when we bought part of a vacation home in Florida, there was never any question that we would travel there by air, even though we live on the opposite side of the continent. For Sophie’s sake, we’d load up the motorhome or the car and Griswold more than 4,000 miles in the middle of winter to get to flip-flop weather.

We sold the Florida place a few years ago and have been sticking close to home in winter but we’re plotting our next warm weather getaway. Unfortunately, by the time the pandemic allows it, we will almost certainly be free to travel as we wish because Sophie can’t realistically be with us much longer. She’ll be 18 next year and she’s clearly in the deepening twilight of a magnificent and extraordinarily long life.

When we come to that dreaded decision, our next dilemma will be whether to take a break from dog ownership in favor of the freedom to travel at will or to quickly try to fill the enormous void her absence will leave. If we get another dog (I’m definitely leaning that way), I want another border collie. My wife would like a small dog that presumably could join us in a crate in the cabin.

But traveling by air won’t be the deciding factor. It will have to be the right dog for both of us.

And I’m damn sure we won’t be getting a pony. Peacocks are cool, though.