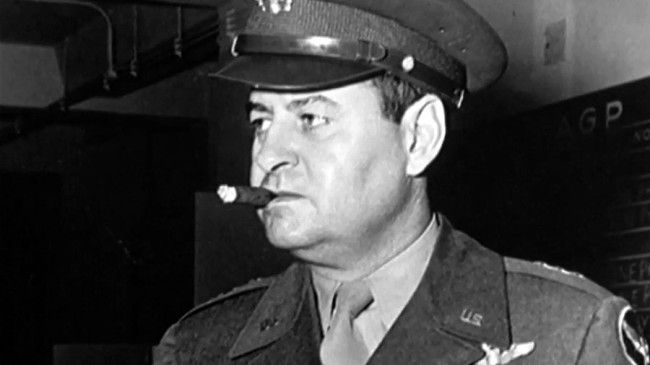 I loathe puns and shun those who wield them in lieu of wit. If you could see me … well, it means my computer camera’s on again, and I won’t apologize for the kombucha-stained yoga pants. Still, you’d quiver at the intense disapproval my face exudes at this article’s title. That expression may have an alternate cause, affecting fitness for flight and could explain why People magazine once again passed me over for Sexiest Man Alive. Face it, 2020’s been “annus horribilis,” but that doesn’t explain why I currently resemble a one-eyed Wiley Post imitating Buddy Hackett.

Consider General Curtis “Iron Ass” LeMay, commander (1948-57) of the Cold War’s greatest aluminum display, the Strategic Air Command. Paramount Pictures couldn’t let a title like that lie fallow, so in 1955 it ginned up a thin plot about romance in the age of nuclear Armageddon between June Allyson and USAF colonel, James Stewart, the World War II bomber pilot who had a wonderful life on screen with Donna Reed before dumping her for Allyson.

Stewart’s talents and service to country are legendary, well deserved, and I won’t suffer a word against him. Adorable with Harvey, his imaginary white rabbit, I suspect Stewart wouldn’t have hesitated to fly a one-way mission over the Soviet Union in a B-47, if “Iron Ass”—named for his no-BS demeanor—had given the order. Back then, these veteran pilots were heroes to us Junior Cold Warriors, so I was recently surprised when catching a whiff of the ghost of LeMay’s cigar.

To claim six degrees of separation between LeMay and me is an ego bridge too far, but the other day when turning from base leg to final, I experienced a LeMay moment.  I wasn’t pumpkin-bombing anyone back to the Stone Age, something we do here in Iowa in defiance of civilized norms. Instead, I felt an early symptom of Bell’s Palsy, which the Mayo Clinic defines as “acute peripheral facial palsy of unknown cause.” My left eye watered as though dust had flashed through the open window in a slipping approach. Blinking didn’t help, because my left eyelid had locked open, causing tears to flow down my cheek, like whenever I watch Miracle On 34th Street, and K. Kringle, a pilot of sorts, speaks Dutch to some refugee kid who doesn’t buy into the whole Macy’s thing.

With the wind straight down the runway and riding an airplane that knew how to land, I wasn’t concerned about my blurring monocular vision. Wiley Post (1898-1935) flew well, using one eye … mostly. My facial integrity degenerated on the short taxi to the hangar as my mouth went Novocain numb. I knew if I spoke, I’d sound like the old prospector, Gabby Johnson, in Blazing Saddles. Sure, I watch way too many movies, but dab-burnit, I’d had Bell’s Palsy a decade earlier. It hadn’t been fun, so I wasn’t happy to feel the return of its padded grip.

Curtis LeMay also suffered from Bell’s Palsy and that’s where our paths cross and diverge. Legend says he clamped a cigar in his teeth to hide a drooping cheek. I don’t buy that. Everyone smoked back then. Eleanor Roosevelt was rarely seen inside the East Room without her stogie. Camel’s flight surgeons prescribed tobacco to steady pilots’ nerves. LeMay’s weaponized cigar punctuated his dramatic grimace, ideal for launching waves of bombers to eliminate entire cities. By itself, Bell’s Palsy is not a grounding event. If struck by the Bell, the FAA advises to suspend flying until symptoms abate. Then, using good judgement, you self-certify and strap in. I pity the 1940s medical examiner who might have tried to ground LeMay when noting that half of his CO’s head had melted. “Ah, never mind … Yer, AOK, Genr’l … sorry!”

Problem is, there’s no telling how long Bell’s symptoms can last. A day? A month? Or, as in LeMay’s case, for life? My previous palsy lasted several weeks, and even though the past is not prologue, let’s consider Bell’s background.

Named for Sir Charles Bell (1774-1842), a Scottish surgeon, anatomist, neurologist, and Mahjong champ who diagnosed his own syndrome but made the rookie mistake of reporting his findings, only to have his Class 3 medical revoked. Centuries later, a diagnosis of Bell’s Palsy is not a permanent grounding offense, but using “good judgment,” you, like I, might want to sit things out for a while.

What it’s not: Symptoms mimic a stroke, but Bell’s Palsy is not a stroke, although you could also be having an unrelated stroke. It’s considered to be caused by inflammation of the 7th cranial (facial) nerve, which runs through a narrow bone—stylomastoid foramen (this will appear on the midterm). Imagine a throttle cable sticking inside its housing, except a spritz of LPS-2 won’t clear it up. Inflammation can be triggered by a long list of viruses, including seasonal influenza B. When the nerve is inflamed, the head can exhibit a gallery of one-sided weirdnesses, including slack jaw, watery eye, sensitivity to noise, headache—especially behind the ear—drooling, loss of taste (puns are suddenly funny), and ill-mannered children pointing at you in Walmart. I can attest to all, and should you experience any, immediately seek medical attention, because you could be experiencing a stroke. Luckily, I wasn’t. COVID also shares some of Bell’s traits. Again, consult a real doctor and not some online hack writer.

Annually, about 40,000 Americans suffer from some level of Bell’s Palsy, which more often occurs between ages 15 to 60. I’m 66; lucky me. Pregnant women are especially susceptible. Mayo makes no mention of pregnant men. Women are most susceptible during the third trimester and within the first week after delivering. Insensitive partners are susceptible to facial paralysis if making any mention of body changes in that period. Those with diabetes are in the target zone, plus anyone suffering from an upper respiratory infection, meaning every human who encounters kids.

Primary treatment is Tincture of Time™. Bell’s Palsy arrives like an unwanted house guest and departs when it pleases. Steroids, such as Dexamethasone, might help but there’s no guarantee. A gluteal IM shot in my less-than-iron posterior had no noticeable relief. Likewise, a regimen of anti-viral prescription drugs might help; my jury’s out on that one. In short, you could look and feel funny for weeks. On average, Bell’s clown face runs about a month. Permanent damage to facial muscles is a possibility, biting one’s lip distinctly so. Buddy Hackett’s childhood bout with Bell’s affected his speech for a lifetime but didn’t hinder him flying the Twin Beech through a Coca Cola billboard in It’s a Mad, Mad, Mad, Mad World (1963). OK, Frank Tallman really did it. Point is, if you experience any Bell’s Palsy symptoms, think stroke until otherwise cleared. If you report the condition at your flight physical, our unnamed AME resource says it “usually clears without residual.” Meaning, ain’t no big thing.

In closing, we’ll jump species to consult my live-in veterinarian who notes that dogs can and do suffer from Bell’s Palsy. Although, she noted, they don’t whine nearly as much as I do about it. Perhaps, they’re too polite to elicit sympathy for pain, but if your canine flying companion’s face sags on one side and can no longer hold a cigar in her jaws, it’s worth an office visit. And if you lower yourself to the cheap pun, “Dog Is My Copilot,” we’ll never speak again. Given that my affliction seems endless and prevents me from speaking with any eloquence, that might be a blessing. But ignore at your own peril advice from John Donne (1572-1631): “… send not to know for whom the Bell’s tolled, it tolled for thee.”