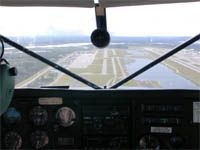 I once made a landing that was so bad the Earth winced. At least that’s what I inferred from the tower when the controller drawled, “Cessna 72A, if able, taxi to parking.” ATC sarcasm is a thin gruel best served cold, but I admit it must’ve turned heads the way the nosewheel shimmied as I approached the fuel pumps, around which every pilot I’d ever known stood in righteous judgment of the worst landing ever. In my defense, none of them were up flying in the viciously calm winds that day. And even if their collective evaluation was warranted, where were they when 45 years later I made the best landing ever? And I don’t mean the best landing that I’ve ever made (a low bar), but the best landing by any pilot, anywhere in anything. And I’m not just bragging. Even though I am. Humbly.

I have little right to preen, because there were no witnesses to my stellar performance, which invokes the tired quantum posit, “If a tree accidentally falls to a good landing and no one notices, does it make a sound?” The answer is, “No.” That’s because this landing—which might as well have been made by a log since I am clueless why it excelled—was smooth and perfectly aligned with the runway. There were no sideloaded tire squeals announcing my arrival, as usually occurs when I’m landing on pavement instead of grass.

We’ve dissected the sod v. pavement dialectic to numbing impasse in previous articles, concluding it’s best relegated to the dustbin of vacuous online chats. But on this day I was landing at Winterset Airport in Madison County, Iowa—setting for the 1995 movie Bridges of Madison County, made famous by Clint Eastwood (a pilot) and Meryl Streep (not a pilot but could easily portray one), sharing a steamy bathtub scene. If you haven’t caught it, imagine accidentally walking in on your parents who forgot you’d moved back home after being furloughed from your first airline job. Now repress that image as we return to the airport and its 3000-foot paved runway.

It’s not that I’m afraid of pavement. It’s simply that after operating from grass strips I’ve noticed my inconsistency at keeping the longitudinal axis parallel to the runway lights. That’s because grass is so forgiving, while I’m so easily distracted. Granted, you’ll sideload the gear whenever landing catawampus, but grass doesn’t get all snitchy about it, doesn’t screech your incompetence the way concrete does.

Oh, yeah, on final, focusing my Taekwondo black-belt mind on this asphalt opponent and how an impious north wind would treat my 8.00×6 retreads when … full disclosure, I was never a black belt. Green was as high as I achieved until some eight-year-old snap-kicked my kneecap, dropping me like a green-girded burrito onto the floor. Meanwhile, back in the cockpit, where thoroughly distracted by thoughts of past failures and lingering resentment, I barely felt the right wheel touch.

To paraphrase Tom Hagen in Godfather 2, “it was like I never existed.” The airplane didn’t need me. She knew how to land. Airbus spends millions making their buses run with minimal human interference, but my Champ has been doing so for 74 years. “Help me less,” she murmurs when I’m overcontrolling, “I got this!” In short, I have absolutely no idea why this one landing, among thousands of my inglorious others, went so well. It’s like being called on in class and giving the right answer despite having never read the assignment. At least I imagine it’s like that, because in my academic career I rarely knew the answers but learned early how to circumlocute the questions by using words like circumlocute. That only worked through the third grade. Nuns were on to me afterwards.

But the teachers who suffered my disinterest when I was a kid weren’t pilots and didn’t understand that when I stared out the classroom window at the autumn sky, oblivious to their obsession with unsightly dangling participles, I wasn’t being lazy. OK, maybe a little. Mostly, I was distracted. I just wanted to be up there, where I saw a Beech 18 crawling beneath a thin overcast, its twin radials synced to my kidhood desire to be somewhere beyond that stifling classroom with its foolish adult notion that success is reserved for those who “pay attention.”

In my ATC career I was paid to stare out windows and pay attention to airplanes. Irony noted, it was the perfect job. As a bonus, I witnessed numerous dreadful landings, some disastrous, as in crash/burn without injuries, but most were just silly, as in bounce, bounce … crunch. After the second bounce we’d already lifted the emergency phone to Crash Fire Rescue (CFR), because tower controllers know that Cessnas and Cherokees always break on the third landing attempt when a go-around is in order. NTSB accident reports are littered with bent props after pilots mangled the touchdown and redoubled their efforts to fly that sucker into the ground in subsequent attempts before exceeding logic and runway’s end.

And that circumlocutes us full twist on how to take unearned credit for great landings. Despite having made what the World Air Sports Federation should declare “the best landing ever,” I can’t offer any advice, because chances are it’ll take me another 45 years to figure out what I did right beyond not getting in the airplane’s way. But knowing I might never make another landing that good again, I promise to get back to you if it happens.