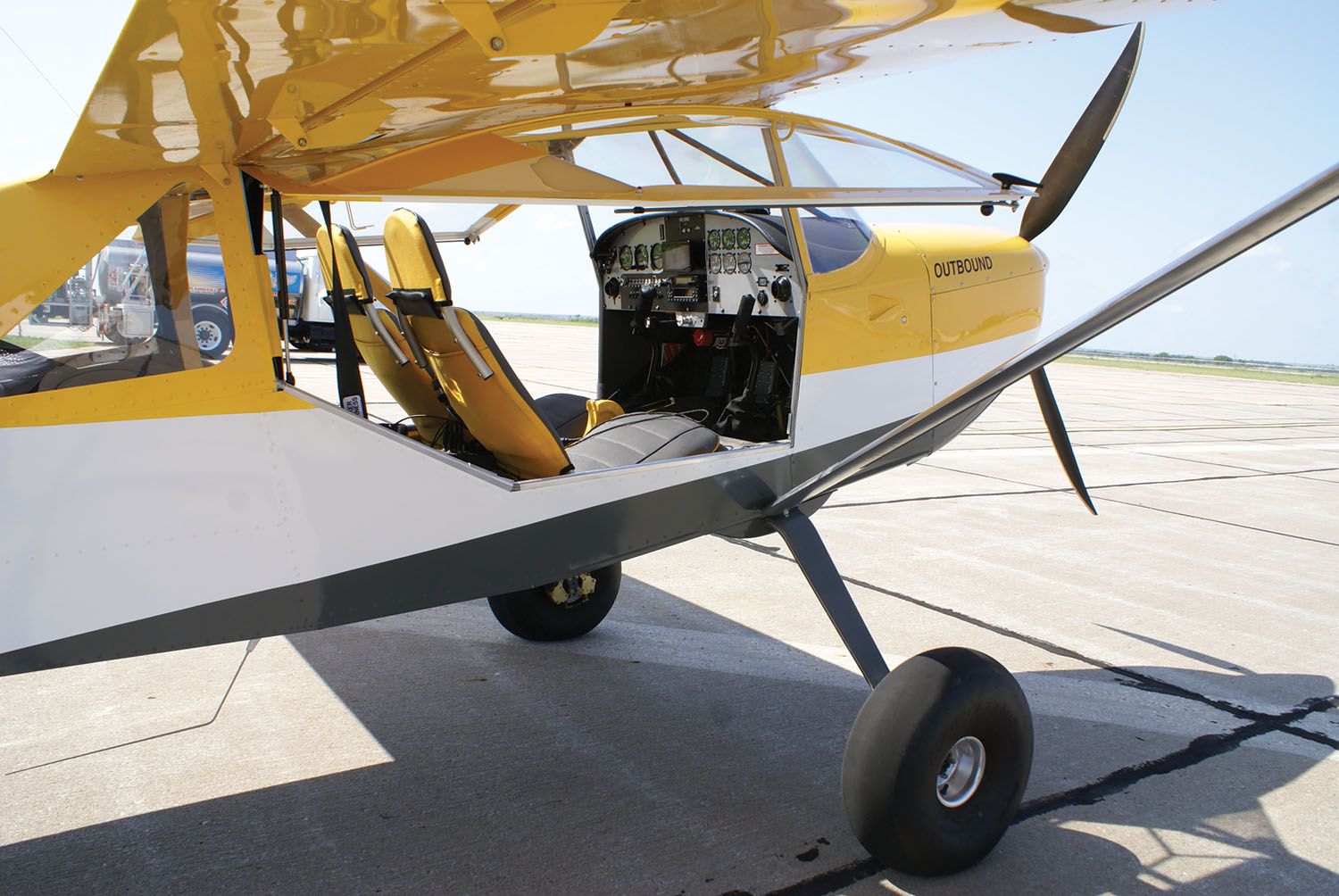 Years ago while we were living in Cameron Park, California, my husband, Mike, took an interest in a new design that was being spoken of. At the time, it was only a promise that it would someday come out. And when it did, it was the RANS S-21 Outbound. Back then, I was working full-time and we had a beautiful flying machine that was fast and well suited our needs, a Van’s RV-10. Mike has been a pilot since the early ’70s and been involved with five Experimental builds, but never fully completed his own project from start to finish. To do so was a dream he always had.

I grew up in a family of three brothers and was always treated as one of the boys—I could compete with them and hold my own whether it was target shooting, riding a motorcycle or off-road jeeping. My dad was a WW-II naval aviator who had a passion for flying that he passed along to his children. When I was 11 years old, we took a family vacation in a Cessna 206 across the country. This was when my love for flying began, but that chapter soon closed due to two of the family members getting airsick nearly every time we went up, one of those being my mother.

It was not until I met Mike that my passion for flying was able to grow once again. I took lessons in his 1948 Stinson taking just over 30 hours of lessons, soloed three times but had to give it up due to my demanding full-time job.

Thirteen years later, we found ourselves building a house at an airpark in Nevada after my retirement. We sold the RV and our house in Cameron Park to have the capital to invest in our new life. We had no idea where we were going to land financially after building a house and hangar on this beautiful piece of dirt that fronted the runway. I know our kids thought we were both crazy for wanting to move to Nevada but they approached it with good humor. Our “going away gift” from them was a framed Google Earth picture of our dirt lot with a banner saying “Welcome Home.”

I retired in March, and by November we moved into our home. It was about that time that I became aware that our neighbor from when we lived in Cameron Park was selling his Cessna 172. I just about begged Mike to buy the 172 so I could finally get my pilot certificate. He agreed and the deed was done…I could finally be a pilot! I passed my check ride in June of 2018. Oh, how sweet to finally be a pilot!

Back to the RANS

During the past couple of years, Mike would intermittently mention the status of the RANS S-21, where it was in the design phase and how close Randy Schlitter, the owner of RANS, was in the runup to selling the S-21 kit to the public. I would always say: no, no, no, not interested! I felt satisfied with the Cessna and so really did not see the need for us to build a plane.

I guess timing is everything! It wasn’t until after getting my pilot’s certificate and we started going places together that I had an epiphany—big time. We were flying to a “local” restaurant for breakfast, and as we climbed out of the valley we live in—our home elevation is 4400 feet msl—it became clear that we could only climb at 300 feet per minute. Sure, the temperature outside was in the mid-70s so density altitude was a factor, but a bigger one is that the Cessna was struggling with the load. We were still within the 172’s weight-and-balance envelope, but the performance was marginal enough that I realized that we were not going to be doing any cross-country voyages. I didn’t even want to think of crossing the Sierra Nevada with this kind of soggy performance. We had been spoiled by the RV-10 all those years. Its power let you basically point and go.

Another frustration I had with the 172 was the panel—it was all gauges and no glass! The RV-10 had two glass panels with round gauges as backup. As copilot for many cross-country miles, I got very used to—or I should say spoiled?—dialing in our destination, punching in the waypoints for gas, then we were on the go! I could look at the terrain or God’s eye view easily. I always knew where we were, which made navigation a no brainer. The added plus of having two glass panels was not only redundancy but the ability to dial in what I wanted to see without disturbing Mike’s display. It was sweet! So while the Cessna was a good trainer for me, I bounced up against its inherent limitations pretty quickly. It was time to consider other options if we were going to have the aviation experience we both wanted in retirement.

The idea of building a plane was a huge jump from where I thought we were going to be in retirement. There were just so many things to consider…time factor (we weren’t getting any younger), money factor and even the build itself. Now that I was retired, I could participate in the build. We could co-build a plane of our choice. Since I had never been involved in any build, this was rather daunting to think about. Mike was willing to take me on as a co-builder, understanding that I was more of an apprentice-level builder and there would be a lot of learning ahead of me in the process. I was definitely willing to learn and he was willing to teach.

Another consideration was that we would need to co-exist in this project with our differences in personality. We each have our strengths and weaknesses—how would this work out? By trade, he is a wildland firefighter who thinks like an engineer. He is a very conceptual learner, being able to look at diagrams and just know how the pieces fit together, and then from that point just tinker around and make things work. I, on the other hand, am a nurse-turned-accountant who is analytical, very detail- and process-oriented, and a visual learner. Mike is also a person who organizes in such a way that makes sense to Mike and no one else. I look at his “space” and think it is an absolute mess, but he knows where everything is. I am a bit of a neat freak and like a clean workspace. Even before we started I knew the build would be interesting!

There is also a great support system where we live in that there are fellow airpark neighbors that have built many airplanes. We have a great community knowledge base as well as tools available for just about any need. We both were ready to begin looking for the plane that would be right for us to build.

A Place to Start

Before we made the decision on what to build, we had already worked out the where. Mike had designed the hangar we built with a workshop to be able to build a plane if we chose to do so someday—that’s thinking ahead. We had the room and the time. Now the question was this: Is that what we wanted to do? We started looking at options taking into consideration budget, time to build, performance and size—would we be able to fit comfortably side by side.

Once more, timing was our friend. While this process of consideration and debate was taking place, we learned that RANS was planning on opening up sales of the S-21 Outbound at Oshkosh that summer. We decided not to make the trek to Oshkosh but instead waited until after AirVenture to visit the RANS factory in Hays, Kansas. There we would see firsthand if this plane would be a good fit for us! Not only could we try it on for size, but the trip would allow us to have a good look at the factory.

So in August of 2018, we headed east with great anticipation. The two days of driving allowed us plenty of time to discuss our options and considerations. Financially, building a plane was within our price range. The desire to build and have our own homebuilt plane was what we really wanted. The flexibility available when building your own plane is endless…something that I realized after having the 172 as to how limited you are on modifications and even working on the aircraft yourself. We wanted an all-metal airplane with side-by-side seating, the option to pick the engine and prop of our choice and have avionics suited to our wants. We came to the realization that so many others have had: Building was the right choice for us.

We arrived at the factory’s opening time to have a tour of the facility by Sheldyne Brown. He showed us the area where they had an S-21 Outbound fuselage mated to the tail cone in progress and also a wing in progress. The build area was very clean and organized. There were several planes in the hangar as well as a completed S-21 that had just come back from Oshkosh.

We finally got to sit down in it. And we both fit just fine! In fact, it was pretty cool—the S-21 has lots of glass all around us including the doors and a skylight, which offers  lots of visibility! The doors bubble out a bit (about 5 inches on each side) giving us some extra elbow room. We also had the opportunity to see the area where RANS does fabrication, inventory for all RANS models and the packaging area for shipping to customers. We got to speak to Randy and Michele (Shelly) Schlitter, owners of RANS, for a while and express our interest in the S-21. Mike enjoyed talking to Randy about some of the more technical questions he had and was pleased to get clarification. The facility is very clean, spacious, everyone treated us great—it was a wonderful experience.

It was time for a test flight. We made the trek over to Hays Regional Airport, where RANS has a “flight center,” and met up with Sheldyne, who flew the S-21 over from the factory. Mike and I each had a turn going for a flight. I got in, buckled up and went flying for about 20 minutes. The Rotax engine had no problem getting us off the ground. The controls were light to the touch and very responsive. I loved it, especially since I could see all around me! Before I knew it, we were back on the ground and Mike was going up with Sheldyne. Watching them take off, I was a bit skeptical that the Rotax could get it done. But it seemed to have no problem and off they went!

After the flights, Mike and I had the afternoon to discuss and chew on our decision. We spent the rest of the day wandering around Hays, taking a self-guided tour at Fort Hays and had a wonderful meal at the local brewpub. Lots of time for us to sort through our decision, talk about our flights and finally make the decision to go ahead with the purchase. I can’t say the brewpub had anything to do with it, but we committed to the airplane and the build process—which we’ll get right into with the next installment.