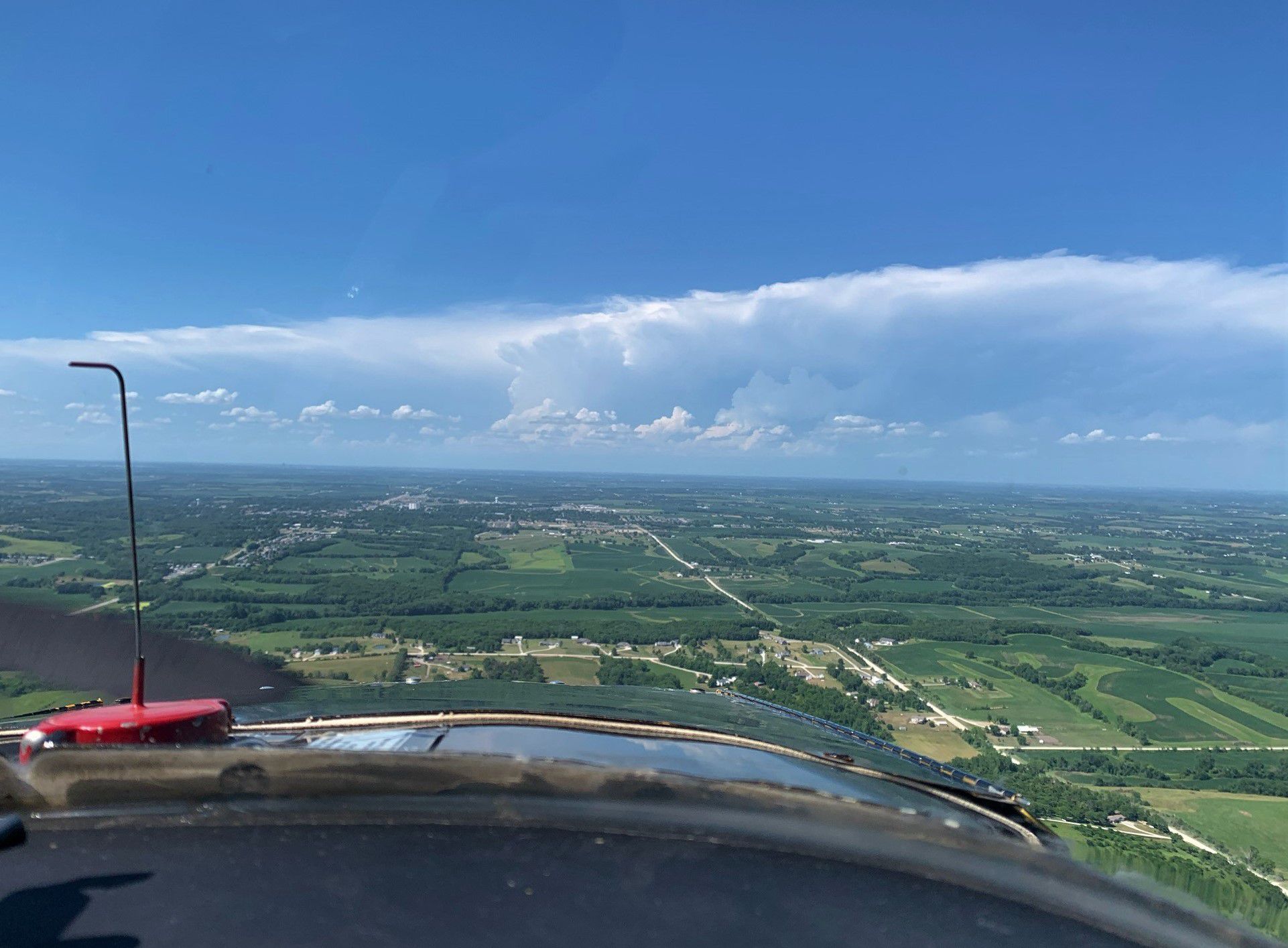 Cue The Towering CUs

You’ve reminded me of the time back in the 70’s we got SO tossed around in an early 50’s V-tail over eastern Kansas that the airplane got upside down … and we weren’t IN the TCU. An old heavy mike came off its perch and boinked the PIC/owner who was spurting blood from his lip. I experienced total loss of control over my body and actually “saw” the newspaper article announcing my demise. I could barely tune the radios I was so nervous. The knothead I was flying with continued on into the clouds — illegally — with the help of some guy in a 400 Cessna w/ radar. When we landed in Burlington, IA, I actually kissed the ground. Not only did I learn not to fly near a TCU, I learned that they have powers that you can’t even see miles away … just like we learned as students.

BTW: The PIC killed himself and his whole family in Colorado a couple of years later in that same airplane.

I think every pilot either has — or maybe should — experience terror to learn that all those warnings we got as a student aren’t just words … they’re a credo to pay attention and … “Don’t do that.” We don’t have to touch a hot stove to know it’ll burn us.

Over three decades of living in the Mojave Desert, I’ve heard of probably a half dozen V-tails coming apart in extreme turbulence over the Tehachapi’s or even IN the desert during bad WX.

During UPT in west Texas one afternoon, my T-38 IP taught me a lesson I will never forget. He had me dive to the bottom of the area aimed at a TCU that was growing like a mushroom on high quality horse-stuff. As I started my pull, he had me slide into full blower while just short of Mach 1. My goal was supposed to be passing that growing cloud. Popping out the top of the area at 350 I still hadn’t even come close. The lesson, well and permanently learned was: you can’t out climb’em.

Another lesson, not personally learned of course, was the result of the C-141 fatal accident in England in 76. That airplane tried penetrating weather in England without radar, it had failed in flight. That aircraft landed in a farmer’s field in 4 large pieces, all personnel dead. Compact European storms are just as nasty as the 70K footers in TX.

I well remember my first 747 flight. I was returning to Elmendorf AFB from a TDY assignment in Alabama, switching planes in Chicago, summer 1972. I was scheduled on a United 720B from Chicago to Seattle. The gate attendant announced that the scheduled airliner was pulled for some maintenance glitch and a brand new 747 on its maiden shakedown flight would be substituted. Apparently it had flown without passengers from Seattle to Chicago and would have otherwise returned to Seattle without passengers, but if we who had been scheduled wished to ride, we could maintain our own schedules. Otherwise, it would be several hours before we could be rescheduled.

As I recall, only 14 of us volunteered. I think there were more stews than passengers, and we were all treated to first class service. I specifically remember the take off—so lightly loaded, the acceleration was extremely powerful, and the initial deck angle was very steep. Once underway, we were given pretty complete tours of the giant, including the flight deck (security wasn’t the big issue it has become). I had flown down from Anchorage in a C5A, so its size didn’t impress as much as it might have, but it was still a pretty amazing airplane.

FAA In The Dark About Drone Swarm Sightings

Time and time again, the FAA is unaware of the military/DHS operations…or at least claims it is unaware. My research revealed that there were many military drone operations being done during those times. But that research also showed that no one military, secret service, or DHS department is under any obligation to inform the FAA prior to flight. Sometimes they do, more often they don’t. Therefore, it is difficult or impossible to determine who knows what, when, and where when testing new equipment, hardware, software, drones, UAS/UAV, etc., by various government agencies.

Part of the tests are to find out who notices, says what, when, and where. So far, the public seems to know more by capturing more video via cell phones, and calls into the local constabulary when, where, and what it sees. This is augmented by any data captured from flight tracking apps such as FlightAware. While some of this night drone/UAV/UAS airshow of sorts has been noted by ATC, overall, it seems like the FAA is the last to know much about anything regarding unusual aviation activity.

It appears a perfect storm of security data mining provided by concerned citizens while measuring the FAA’s response to the same stimulus. If you were testing the current FAA “system” for its ability to “see” your activity, why would you notify them in advance? The bonus is information gleaned from John Q. Public’s reaction or lack of reaction to whatever you launched into the skies. And if you really wanted to cover up what you are up to, inform the mainstream press via un-named sources (because they were not authorized to speak to the press) suggesting alien, UFO activity and soon it’s not only speculative but will be political. Sort of like robbing the bank at high noon with everyone eyes wide open…and seeing nothing.

Poll: Would You Take A Ride in the Ehang Multirotor?