Last year’s TWA 800 accidentgenerated an extraordinary amount of public and media interest, perhaps because,thankfully, airplanes don’t often turn into fireballs and fall out of the sky in pieces.Its aftermath has only emphasized the peculiarities of the incident and heightened ourawareness of the political nature of reaction to such tragic events. The initial responseto the elderly 747 exploding on initial climbout from JFK was that it must have been aterrorist act, preferably of the Middle-Eastern sort. Seizing upon the politicallyopportune moment to make points, the Administration immediately jumped on that bandwagon,and the Gore Commission was appointed to take over the normal security and safety dutiesof FAA. 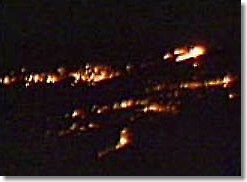 Although NTSB Vice-Chairman Robert Francis was nominally in charge of theinvestigation, then-DOT Secretary Federico Pena took control of the media aspect of theaccident investigation, and the prime-time TV opportunity, from the NTSB and, for thatmatter, the FAA. Fair enough from a political point of view — a few short months beforeFrancis had already garnered more than his share of TV prime time in the Florida swamps.

Find the cause, or apprehend the perps?

By now, it seemed that nothing about the accident shouldhave surprised even the most hardened aviation observer, but as airplane bits were beingpainfully dredged up off Long Island’s south shore, the FBI stepped in to take over theinvestigation from NTSB. 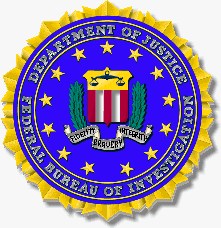 The bureaucratic infighting and public clashes that ensued were anew sideshow, particularly to the NTSB, which historically has attempted to maintain anopen mind and make no comments on causes of an accident until it issues its accidentreport. In the politically charged atmosphere since the ValuJet crash, that has becomesomething of an exception to the rule, unfortunately.

Showing no such rectitude, the FBI, having seemingly already made up its mind, pursueda parallel investigation, often interfering with the efforts of the NTSB’s experiencedprofessionals, looking for evidence to fit its criminal theories. As time went on, and asit became more and more apparent that public and political interest was waning and thatthe FBI knew very little about aviation accidents, it slipped into the background,formally bowing out earlier this month, just before the start of the NTSB public hearingon the tragedy. Thefts of wreckage bits by ghoulish conspiracy theorists and PierreSalinger’s bizarre discovery of the World Wide Web added color to the mix, and set thestage for this week’s hearings. 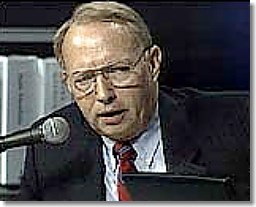 The NTSB’s hearing is the first that hasreceived gavel-to-gavel TV coverage, albeit on the seldom-watched-outside-the-BeltwayC-SPAN, and initial general media interest was considerable, reviving interest in theaccident. NTSB accident hearings are usually pretty chaired by the investigator in charge,but not this time. NTSB Chairman Jim Hall, taking advantage of the media opportunity,displaced Bob Francis behind the gavel, and Francis was seen dutifully making theWashington aviation Christmas party circuit, far from the scene of the action at theBaltimore Convention Hall. A few DC wags wondered if it could be that Jim Hall, an Al Gorechum, was being given some popular exposure in anticipation of a more public role in thecoming presidential campaign.

Those who expected the hearings to reveal new, explosive details of the crash — thegeneral media, victim’s relations and the like — were to be sorely disappointed by thisweek’s events in Baltimore. They didn’t understand the basic concept of these hearings,which is to put the accident evidence before the public, as well as to give the public aview of how the investigation was conducted. In the light of the constant harping fromvarious sectors on how long this investigation took, the expense and the lack of results,this hearing, more than others, was also a public platform for the NTSB to show just howgood they are at what they do, even though they still haven’t yet found a definitiveanswer as to the cause of the accident. 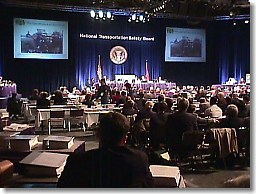 NTSB detractors, meanwhile, also had their day, usingthe attention of the media on the hearings to independently point to perceived errors andomissions on the Board’s part, and on the part of the FAA. Ex-DOT Inspector General MarySchiavo used the opportunity to again blast her old nemesis, the FAA, and to plug her bookand enhance her marketability.

The hearings opened in concert with the very public arrest of a TWA pilot, a writer andhis TWA flight attendant wife, who were alleged to have stolen TWA 800 wreckage bits fromthe assembly hangar on Long Island in pursuit of a conspiracy theory and profits from thesale of a book on the subject of the accident. That was followed by an exhaustive paradeof witnesses testifying to the lack of bomb, missile or meteor evidence, all of whichshould be enough to permanently silence conspiracy theorists, but we all know better,don’t we?

These initial carnival events drew the crowds and made the headlines, but were only thewarm-up for the more serious aspects of the hearings, which outlined the possible causesand some possible corrections for the problems uncovered by the investigation. Once theinitial show was over, the hearings were rapidly relegated to the back pages and the realwork got underway. 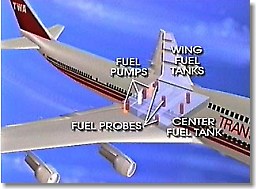 These problems centered on the three factorsneeded to cause a fire — ignition, fuel and an oxidizer. On the ignition front, the agingaircraft discussion was renewed (the press and some vocal "survivors" groups arefond of the issue, one group urging the grounding of all "classic" 747s), andcentered itself on the wiring in the fuselage tank. General aviation pilots have beentaught not to pay any attention to the generally wildly inaccurate fuel gauges in their GAaircraft, but because they don’t visually check the tanks, keep accurate time records offuel burned, or use electronic fuel-flow meters, airlines rely on fuel gauges. Not thenotoriously imprecise cork-and-float, all-the-electrics-safely-outside-the-tank designsused in our lowly bug-smashers, but remarkably accurate fuel gauges that have electronicsensors in the tanks, and the concomitant electrical wiring. Electrical wiring inside thefuel tank? Yup! 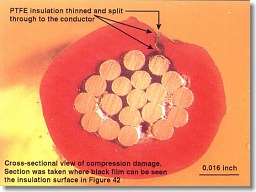 This wiring is subject to all the risks that the wiringin the rest of the airplane is subject to, abrasion, flexing, corrosion, heat damage andthe like. Worse, being inside the tanks it doesn’t get looked at very often, and ifsomething goes wrong with it, the location is far from ideal. Some corrosion and abrasiondamage was found on TWA 800’s wiring, but not enough to be conclusive tied to theexplosion. The most constructive solution proposed for this problem was the obvious one —that is, to get the sensors out of the tanks, by replacing them with external"radar-like" sensors like those already used on the Boeing 777. However, noinformation was offered on retrofitting possibilities or the expense involved.

The fuselage tank’s fuel scavenge pump was never found, and it is deemed quite possiblethat this either leaked or caught fire, particularly since there had been a problem withleaking O rings in these pumps. With no pump to examine, however, there is no way topositively link it to the explosion. Boeing says it is considering a modification to thefuel scavenge pump to eliminate the possibility of fire reaching the tank, even if thepump catches on fire. 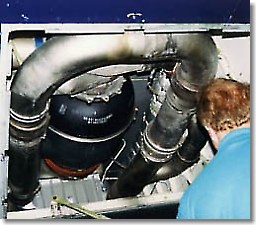 If he were still with us, Rudolph Diesel wouldbe glad to tell us that a source of fire isn’t always needed for combustion. The NTSB isconcerned that heat from the air-conditioning packs (just below, and sharing a common wallwith the tank), weather, and the effects of the climbout might have caused or contributedto the fire. The heat load would certainly have contributed to the vaporizing of the smallamount of fuel left in the nearly empty tank. It conceivably could have gotten hot enoughto reach the flash point of the fuel and air mixture, initiating the explosion.

Only dollars away from a solution?

To cure this potential problem, both active and passive corrections were considered.The passive approach involves the military practices of using JP-5 fuel rather than Jet-A(JP-8), and of foam filled tanks. From the tenor of these presentations and discussions,it became clear that a world-wide switch to JP-5 is likely, if fuel refiners can meet thedemand, an open quesdtion. An increase in cost of approximately 2 cents a gallon (ifmanufactured in large quantity) more than Jet-A and slightly harder starting whencold-soaked were brought out as the only problems. These, then, in return for a 40 degreeFahrenheit reduction in flash point, which would result in "a 20-fold increase insafety," according to the FAA. Foam filled fuel tanks reduce sloshing and keep fuelliquid longer, lessening the rate of vaporization, and reduces explosion damage byabsorbing the shock wave. It does appear to have some formidable downsides, includingincreased weight, reduced fuel capacity and long-term maintenance problems both withpossible foam deterioration and tank repair. 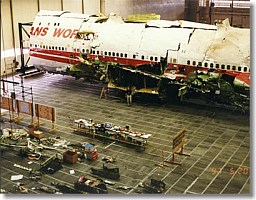 The issue of heat from the air-conditioningpacks wasn’t considered as a subject for remedial action. The possibility of shutting downthe air-conditioning when wall temperatures reached a specified level (eitherautomatically or manually) in current aircraft, and moving the air-conditioning packs infuture production didn’t seem to occur to any of the panelists, or at least it wasn’t highon anyone’s agenda, and was not brought up for consideration.

Active control centered on the concept of inerting the tank, either by replacing spentfuel with inert nitrogen (filling the empty volume and thereby preventing vaporization) orvia forced air circulation that would prevent buildup of fuel vapors. Systems such asthese are used on some military aircraft. While conceptually appealing, it became clearthat expense (particularly in retrofitting) and weight considerations, upwards of a ton,make these systems impractical in the short term. Not that impracticality or outrageouscost ever stopped the NTSB from demanding something be done.

The hearing concluded with no final finding of the cause, which is fairly unusual, butthe fact that the fuselage tank exploded is now generally accepted by all but the fringe.The NTSB is recommending action by the FAA to reduce the future possibility of arecurrence by reducing tank temperatures, fuel flammability, and eliminating electricalsources of ignition from the tanks. Boeing, meanwhile, is considering a redesign of thetanks to reduce temperatures.

The FAA, meanwhile, made lots of promises toinvestigate the issues, but skeptics noted this is SOP for the agency. Other noted thatthe FAA has already taken some meaningful remedial action, though hardly enough to satisfyHall. Cynics noted that none of the FAA’s actions to date would seriously affect theairlines’ bottom lines.

Jim Hall, a relative newcomer to aviation, but no neophyte in politics, ran the showadmirably, and only infrequently let his lack of aviation or technical background show. Hemasterfully used every opportunity to put pressure on the FAA. After five days, what didcome through was his trust in, and reliance on the real pros at the NTSB, not the boardmembers, but the accident investigators and other civil service types who do the gruntwork and supply the technical knowledge. Still, those who had any doubts that this was aninside-the-Beltway political show should have had them dispelled when the FAA’s TomMcSweeney, Director of the Office of Certification, talked of "synergizing theinformation and moving forward."