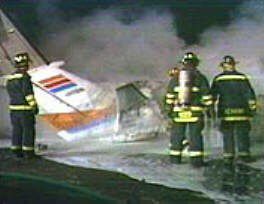 On November 19, 1996, at 1703 CST, a UnitedExpress Beechcraft 1900c, Flight 5925 collided with a Beechcraft King AirA90, N1127D, at Quincy Municipal Airport, near Quincy, Illinois. The UnitedExpress flight was completing its landing roll on runway 13 and the KingAir was departing on runway 24. Both pilots and 10 passengers on the 1900Cand both pilots on the A90D were killed. Both aircraft were destroyed. The1900C was on an IFR flight plan and operating under FAR part 135. The A90had not filed a flight plan and was operating under FAR part 91.
[NTSB Preliminary Report] 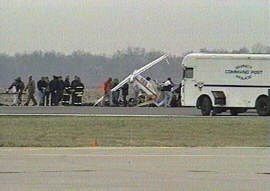 There were 12 souls on the Beech 1900 and two otherson the Beech King Air 90 when the planes skidded into one another at theintersection of Runways 4 and 13 Tuesday evening in an accident no one caneasily explain. With overcast skies, visibility of 10 or more and at bestthe dusk light of 5:02 p.m. CST, it’s conceivable that the 1900 crew thoughtthe King Air pilot saw their approach to Runway 13 before the 90 startedrolling on take off from Runway 4. If both crews were using the 123.0 MHzCTAF, they apparently weren’t both hearing.
[AVflash 2.47 11/25/96] NTSB BLAMES KING AIR PILOTS FOR QUINCY CRASH
The National Transportation Safety Board Tuesday released its report intothe November 19 runway collision of two planes at the Quincy, Illinois airport.According to the Board, the accident occurred when the pilots in the BeechKing Air 90 and a third plane in the area, a Piper Cherokee, failed to usethe local Unicom frequency properly leaving pilots of a landing United ExpressCommuter to believe the runway was clear. The NTSB also noted that the Quincyairport lacked dedicated firefighting and rescue equipment and called uponthe FAA to improve that capability at small airports.
[AVflash 3.27 07/06/97]

NOTE: The opinions expressed below are solely those of theauthor, and not those of AVweb or its staffmembers. 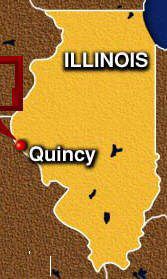 I read your article about the NTSB conclusions regarding the Nov. 19, 1996accident at the Quincy airport. Once again the NTSB has shown us it is incapableof conducting a thorough, complete and independent investigation of atransportation accident. From witnessing the NTSB Board meeting and readingthe NTSB factual reports, it was clear they were not interested in findingthe root cause of this accident.

Let me state right up front that I am not a pilot and was an aviation novicebefore this accident, but have tried my best to become knowledgeable since.Neal Reinwald, one of the King Air 90 pilots, was my stepfather. I am a concernedfamily member, pursuing the truth about the causes of this tragedy…hopingto prevent anything like it from ever happening again. I am also a U.S. citizenwho is shocked and disillusioned by what I’ve learned about civil aviationand the NTSB’s and FAA’s unbelievable incompetence and negligence.

I was surprised to find the NTSB and the FAA are held in such low regardby most of the people I talked to. I quickly became disillusioned with theNTSB after requesting information about the accident, and cooperating withtheir investigation. All I could think to myself was that these are not verybright people, and they don’t seem to know what they’re doing.

Didn’t they listen to the CVR?

If you read through the NTSB conclusions and probable causes, you will seethat they are self-contradictory.

The Board also discussed the “stepping on” of radio transmissions by theCherokee pilot, and probably the ground proximity warning on the Beech 1900,that interrupted radio communications. But if you go back to the transcriptof the CVR, you will see that the King Air pilot did announce hertake off from Runway 4 just over one minute before the crash. It is perfectlynormal for a plane to spend 30 or 45 or 60 seconds on a runway to completea checklist, particularly in the case of a training flight (which is whatthe King Air flight was).

Based on the CVR transcript, the United Express pilot and co-pilot had tobe fully aware that there were two other planes operating at Quincy, andthat the pilot of the King Air was a female with an unusual sounding voice.With all this radio communication between the three airplanes involved justminutes and seconds before the crash and the “probable” stepping on of radiotransmissions by the Cherokee pilot, I fail to see how the NTSB could reachthe conclusion that there was a failure to communicate by the King Air pilot.

Further investigation of the runways at the Quincy airport will show thatRunways 4 and 13 have a 15-foot difference in altitude which causes a “blindspot” on the horizon when looking towards Runway 13 from Runway 4. Why weren’tRunway 13’s lights turned on at dusk (expecially given the low overcast ceiling)?The CVR transcripts show that a microphone was “clicked” to key-up thepilot-controlled runway lights a few minutes before the accident.

How did the United Express pilots lose track of the two planes on the groundat Quincy when the CVR transcripts clearly show they saw there were two planeson the ground? How could they have confused the Cherokee pilot for the KingAir pilot on the radio when they had just commented about the King Air pilot’svoice?

Where was United Express, and when?

I couldn’t believe the NTSB investigation didn’t include a timeline of eventsleading up to the accident, charting the actual locations of the three planesinvolved with their complete radio transmissions. The Board should shouldhave investigated the altitude, speed and location of the United Expressplane as reported by ATC radar, independent of the plane’s radio transmissions.I’m convinced such an investigation would have shown that the United Expressplane couldn’t have possibly been where it said it was, and that the UnitedExpress pilots were fully aware they were “fudging” their speed and locationso they could make a fast straight-in approach to Quincy because they weretwo hours behind schedule.

How did the United Express airplane approach the Quincy airport? What wastheir speed and altitude and location, compared to where they said they wereon the radio transmissions? If they were six or five miles out from the airportwhen they reported those positions, and if they were traveling at normalapproach speed, how did they get to the airport in such a short amount oftime?

Why hasn’t it been mentioned that the United Express flight was almost twohours behind schedule? Where and when did the United Express plane make itsleft hand turn for final approach into Quincy, as they announced doing onCTAF, when in fact they made a fast straight-in approach? Why did the UnitedExpress pilot radio their company ground station at Quincy that they wouldbe landing at 5:07 pm, yet the accident occurred at 5:01 pm?

What did the last CVR comment from the United Express pilot, “We fudged inthere a little bit…” mean? I believe they were in a big hurry to get intoQuincy because they were behind schedule and very tired. They chose Runway13, even though it was contra-indicated by the wind direction and speed.They had been warned about making straight-in approaches to Quincy. Pleasereference FAA Advisory Circular AC 90-66A:Recommended Standard Traffic Patterns and Practices for Aeronautical Operationat Airports without Operating Control Towers. They exceeded normal approachspeed, did not fly a normal approach profile, and transmitted inaccuratelocations during the approach.

Other factors the NTSB ignored

How could the NTSB conclude that United Express pilot fatigue was not acontributing factor, when the factual reports show that the United Expresspilot did not go to bed before 11 pm on November 18, and then reported towork at 4:15 am on November 19th, with approx. five hours of sleep or less,and was completing over 13 hours on-duty time, flying eight legs in and outof O’Hare and other cities, changing airplanes because of equipment problems,and was running over two hours behind schedule? Why did the United Expressground crew want to know if she “was in another bad mood” when landing atQuincy.

How does the NTSB know who the Pilot-In-Command of the King Air was? Thebodies of both pilots were discovered trying to escape the King Air; theywere not in their seats. All radio communication was conducted by Laura Brooks.And, its documented in the NTSB factual reports that the instructor-pilot(Neal Reinwald) normally allowed the trainee-pilot (Laura Brooks) to flyPIC on the last leg of the trip. Given the radio transmissions, and the regulartraining procedures, it is logical to assume that Laura Brooks was thePilot-In-Command. (She was also a fully certificated pilot.)

I invite you to keep probing. We still don’t have the answers, and the NTSBis obviously not interested in a full investigation. A thorough investigationwould show the NTSB’s and the FAA’s hidden agenda to promote the airlinesat any cost, and to shield local and Federal governments from culpability.

I continue to be very frustrated with the NTSB’s self-congratulation fortheir performance with their newly mandated “family liaison responsibilities.”I can tell you that our family has never been contacted by the NTSBoffering any kind of assistance. We had to contact the NTSB to beg forinformation about the accident from day one, and still have to constantlyask them for reports.

A few days after the accident, I questioned the NTSB about their lack ofcommunication with our family. They apologized, said we “slipped throughthe cracks,” and reminded us that this accident was the first since the newdirective went into effect. Last January when I again questioned their lackof communication with our family, they responded that since our family members(Neal Reinwald and Laura Brooks) were not on a commercial aircraft, we werenot covered under their new family assistance directive.

The NTSB also congratulated United Airlines for their active role in workingwith the victims families, when they “really didn’t have to,” a comment Ifound particularly disturbing coming from the NTSB, a supposedly independentgovernment agency. We have never been contacted by United Airlines or GreatLakes Aviation (the United Express carrier). Basically, our family has beentreated like lepers by the NTSB, FAA and United Airlines.

I cringe whenever I see or hear media reports about what a great job theNTSB was doing with their new responsibilities. What a farce!