Using mnemonics is an effective way to learn airspaceclassifications, and nothing suits Class B airspace better than the letter B. Class Bairspace surrounds "Big" airports in a shape that looks like a big upside downwedding cake. Class B airspace isn’t reserved only for big airplanes, however. Flying toand from a Class B airport or transitioning through Class B airspace in a small airplaneis permissible, may be necessary depending on the mission, and can even be fun. Pilotsjust need to beware of the procedures, pilot and aircraft requirements, and potentialhazards that await them both in the air and on the ground. 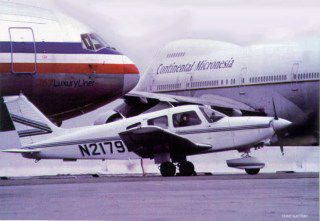 The mere fact that Class B airspace is big is a good reason to learn how to fly in it.If Class B airspace separates your point of departure and destination, you have threechoices – fly around it, over or under it if possible, or through it. The last option maybe the most desirable choice to save time and avoid flying uncomfortably high or low.

The letter B also reminds pilots that this airspace has big bucks, busy airspace, andjet blast, things that can discourage landing at a Class B airport or flying through theairspace. And there’s a cost issue. Virtually all Class B airports charge landing andother fees.

Class B airspace may also be crowded, and to mix large and small aircraft safelyrequires pilots and air traffic controllers to exercise extra diligence. Wake turbulenceis a likely factor, and on the ground, jet blast is a potential hazard. Finally, if youdon’t meet the pilot certification and aircraft equipment requirements, flying into ClassB airspace will put you afoul of the federal aviation regulations.

Still, there are plenty of good reasons to visit a Class B airport. Perhaps you need topick up or drop off friends or business associates so they can connect with commercialflights. Always associated with large cities, Class B airports often are convenient tonumerous attractions and amenities.

If you are in training for an instrument rating or airline transport pilot certificate,a Class B airport might be a perfect location to practice instrument approaches andprocedures. Also, to ensure the safety of your flight, you may need to land at a Class Bairport when faced with such things as deteriorating weather. Class B airports typicallyhave plenty of instrument approaches with low minimums, and approach controllers can helpyou avoid storms. Also, FBOs that serve big Class B airports typically have comfortablefacilities, flight planning rooms with computerized weather, and can arrange for anythingfrom a cab or rental car to hotel accommodations.

Class B airspace is controlled airspace in the strictest sense. Like Class C and Dairspace, which surround airports with operating control towers, pilots who fly in Class Bairspace must follow the basic procedures for communications and operations laid out inFAR 91.129. Aircraft arriving at or transitioning the airspace must establish two-waycommunication with the appropriate ATC facility. Sectional and VFR terminal area chartsgive you the frequencies.

The first operating rule that separates Class B from Class C and D airspace is assimple as ABC – Always Be Cleared. Not only must you be in two-way communication with ATCbefore you enter Class B airspace, you can’t fly in the airspace until a controller givesyou a clearance to do so. Don’t make assumptions on this matter, either. If you don’t hearthe controller use your airplane’s N-number and say "cleared to enter the Class Bairspace," ask for that clearance before you cross any broad blue line that depictsthe Class B boundaries on a sectional chart.

Next is an equipment requirement. Given the necessity that you must receive aclearance, the requirement for a two-way radio is obvious, but FAR 91.131 also spells outanother ABC – an Active transponder Beacon with Mode C (altitude reporting). Class Bairspace is simply too busy to routinely allow an aircraft into the mix without a Mode Ctransponder.

Controllers, as well as pilots, need all the help they can get to maintain safeseparation between aircraft, and Mode C gives controllers that tool, especially forvertical separation. An airplane’s Mode C transponder also "reports" to the TCAS(traffic alert and collision avoidance system) found on large, commercial aircraft andmany corporate aircraft.

If you fly IFR in Class B airspace, your aircraft must have an operating VOR or TACANreceiver. VFR aircraft are exempt from this requirement, so if a controller tells you totrack to or from a VOR, and you don’t have a working VOR receiver, you can reply"unable," and the controller will give you a heading to fly.

The minimum pilot qualification to operate without restrictions in Class B airspace isa private certificate, but with the proper training and endorsements, a student orrecreational pilot can land at all but a handful of Class B airports (see sidebar).

Class B airspace and airports are busy places. A high degree of pilot knowledge andskill – and a healthy dose of preflight planning – are definite assets. As you prepare tofly to or from a Class B airport, study the airport’s entry in the Airport/FacilityDirectory. Also examine the airport diagram, which you can find on instrument approachcharts for the airport. Usually, Class B airports have a complex network of taxiways, soknowing where you are and where to go is half the battle of negotiating the airport like apro. An instrument approach chart also gives the frequencies you’ll need includingapproach control, ATIS, tower, ground, and clearance delivery. Knowing the layout of theairport, runways, FBOs, and other facilities can greatly ease the tension associated withoperating in Class B.

Not everything you’ll want to know is published, such as prominent landmarks, parkingareas, or other procedures. Whether you’re a student, or a private pilot making your firstflight into Class B, it’s a good idea to work with an instructor who flies to and from theairport frequently.

Precise communication in Class B airspace is critical. Controllers are accustomed todealing with "old pros," and communications often approach a rapid-fire staccatoas controllers direct the high-density flow of traffic. Listening carefully so you don’tmiss a radio call is most important. Avoid unnecessary chatter and stick to the businessat hand. Have a note pad handy to copy clearances, transponder codes, altitudes, headings,and frequencies.

Remember, procedures at a Class B airport can differ from other controlled airports.For example, when you depart from airports such Boston’s Logan International, clearancedelivery gives pilots their VFR and IFR departure clearances. Instead of calling groundcontrol after receiving their clearance, pilots are supposed to monitor ground control andlisten for their taxi instructions.

Runway incursions – especially at large airports – have received a lot of attentionrecently. Never take off, land, or taxi without the proper clearance, and remember, aclearance to "taxi to" a runway doesn’t clear you to cross that runway. A taxiclearance to a location implies that you can taxi across taxiways and inactive runways -unless the clearance instructs you to "hold short" at a particular point. Whentaxiing, follow the clearance’s prescribed route. Make sure you understand and abide byany "hold short" instructions – and always acknowledge any hold-short clearance.

Let’s say you’ve just landed on JFK’s Runway 13L. As you clear the runway and switch toground control when instructed, the controller rattles off your taxi clearance -"Zulu-Alpha-Bravo, hold short of November-Alpha, cross behind the Unitedseven-four-seven, then Bravo, X-ray, Quebec to the ramp."

Unless you’ve studied the airport diagram, you may be caught unprepared. If you getlost or disoriented on the ground, ask the controller for clarification. You can alsorequest "progressive" taxi instructions, and the ground controller will guideyou step by step to your destination.

One of Class B’s purposes is to separate larger, faster aircraft from smaller, sloweraircraft, and to avoid some of the wake turbulence problems. Anytime you fly in Class Bairspace – especially during takeoff, approach, and landing – exercise extreme caution forwake turbulence. On the ground, beware of jet blast, which can act like a giant leafblower on a small aircraft. A departing jumbo jet can spew a 70-mph blast as far as 600feet, so don’t be in a hurry to taxi onto the runway behind a jet even if the controllerclears you to do so. Also avoid following a jet too closely while taxiing. A powerfulblast can hit you when the jet adds power.

As with landing at a Class D airport, pilots must be at or above the VASI (visualapproach slope indicator) during the approach and to make left traffic unless ATC givesother instructions. Because ATC sequences smaller, slower aircraft with jets, controllerssometimes request that pilots of slower aircraft keep their speed up on final approach.Flying your approach safely at a higher speed may take some additional training andpractice (at an airport other than Class B, naturally).

Also, tell controllers you’re unable to comply with other instructions, such asheading, or altitudes, if you can’t fulfill their requests safely. Controllers can’t seeeverything you do from the cockpit – an approach controller can’t see the clouds he may bevectoring you into, for example – so let them know if you have a problem with aninstruction or clearance.

FAR 91.131 requires that in Class B airspace, training operations must "complywith any procedures established by ATC for such operations in that area." If you planto conduct training operations in Class B airspace, consider contacting the tower orapproach control facility beforehand to learn about any special procedures. If you’reunsure whom to call, the nearest FAA Flight Standards District Office (FSDO) can helpdirect you to the proper facility.

Having a radio failure while you’re flying in Class B airspace can be an unnervingexperience, but the regulations spell out the procedures you should follow. If you’reflying VFR, you can land as long as the weather is at or above basic VFR minimums, youmaintain visual contact with the tower, and you receive a clearance to land (watch forlight gun signals). 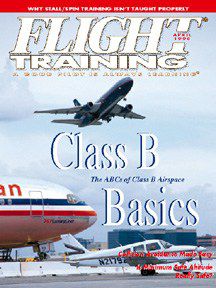 Some Class B airports seem to discourage the little guys from flying to and from them,but others are more than happy to accommodate students and private pilots learning how tofly in Class B airspace, particularly during slow periods. Calling the Class B airport’sATC facility manager is the best way to find out how the airport deals with trainingflights.

Many Class B facilities participate in Operation Raincheck. Open to all pilots, thesesafety seminars, which often include tours of the radar and tower facilities, are a greatway to meet your ATC counterparts and to ask questions about all aspects of flying Class Bairspace. With all its requirements, procedures, and potential problems, Class B airspacecan sometimes seem intimidating, but the more you learn, the more comfortable you’llbecome operating in the big "B."