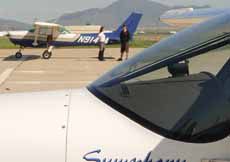 The FAA raised the mandatory retirement age for pilots from 60 to 65 on Dec., 13, 2007, which means affected pilots will be forced into retirement this year, while some forecasters see growing demand just around the corner. Boeing forecasts that the industry will need more than 460,000 new pilots to meet worldwide demand between now and 2031. The Asia-Pacific region is expected to absorb roughly 40 percent of that demand, but Boeing predicts that almost 70,000 new pilots will be needed in North America. And the confluence of an erosion of the active pilot population, the dawn of growing demand, and more stringent pilot training requirements (expected by 2013) has the FAA’s director of flight services concerned.

John Allen, FAA director of flight services, told The Associated Press, “I’m concerned because it has safety implications.” Allen said his concern is that high demand could result in “someone getting into the system that maybe isn’t really the right person to be a pilot.” He added, “Not everybody is supposed to be a pilot.” But difficult economic times have led to layoffs in the U.S. and that has included pilots. Some of those pilots resolved their unemployment by going to work for overseas carriers. Higher demand in the U.S. could bring those pilots home. But if the bulk of the demand grows (as predicted) overseas, any exodus from foreign carriers could exaggerate pilot shortages in those parts of the world, leading to effects that could be felt throughout the industry. In some parts of the world, specifically China and India, a pilot shortage is already reality.