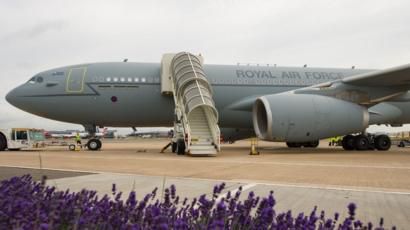 As the Air Force awaits the arrival of its new billion-dollar-plus versions of the Boeing 747-8 to replace the current aircraft used as the primary Air Force One, other countries are sorting out their own solutions to the “executive transport” requirement. The citizens of the U.K. and Canada are much less enthusiastic about ensuring their leaders are swaddled in the latest comfort and technology when they travel and the leaders are taking some heat for some comparatively modest investments. U.K. Prime Minister Boris Johnson wants the Royal Air Force Voyager, a tanker based on the A330, he uses for international travel painted in Union Jack red, white and blue instead of the gunmetal grey that’s in fashion for military aircraft. The $1.3 million paint job proposed for the aircraft, which functions as a tanker most of the time and has a section with business class seats installed for Johnson and members of the royal family, has become a political hot potato. Meanwhile, in Canada, Prime Minister Justin Trudeau is under the gun for a different reason that has the same genesis in the perception of privilege and luxury.

Trudeau’s government is facing backlash for buying two Canadian-built Bombardier Challenger 650 business jets to replace two original-design 40-year-old Canadair Challengers (Bombardier bought Canadair in the 1990s) that have done their duty. The 650s will cost about $80 million in total and be much more versatile than the old planes. The backlash has been enough to prompt the PM’s handlers to issue statements about the other uses the Canadian air force has for the business jets, including delivering medical supplies during the COVID-19 response. Meanwhile, Trudeau’s normal ride for long trips is recovering from a severe case of hangar rash. Last fall, the 35-year-old A310 took $11 million in damage to the nose and an engine after it got away on a contract ground handling crew at Canadian Forces Base Trenton. It won’t be fixed until the end of this year. The plane is the last passenger carrying example of the original Airbus airliner design. The air force has four others designated as the CC-150 Polaris, two used as tankers and the others as cargo and troop transport platforms. The prime ministerial plane is also pressed into military service as required.