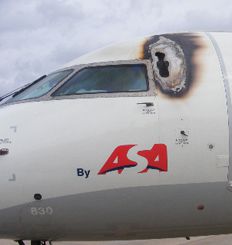 While we like a good story as much as anyone, those facts are pesky things. Some remarkable pictures making the rounds on the Internet show a big hole burned in the skin of an Atlantic Southeast Airlines CRJ 200 and attribute the cause to an inflight lightning strike, which, considering the location behind the captain’s head, conjures up some pretty interesting scenarios, much more interesting than the mundane reality. Within hours of running a photo and the lightning strike speculation, an AVweb reader delivered the straight goods by way of NTSB file number DCA09FA033, which suggests the cause was an electrical fire while the aircraft was being preflighted in Tallahassee for a trip to Atlanta last March 1.

According to the report, only the captain and a flight attendant were on board when external power was plugged in. The fire started shortly afterward and they both got out on the airstair. Neither was injured. There’s not much detail in the NTSB report, which is preliminary, but it’s been suggested that a breach in an oxygen line helped fan the flames and create the aluminum-melting temperatures.