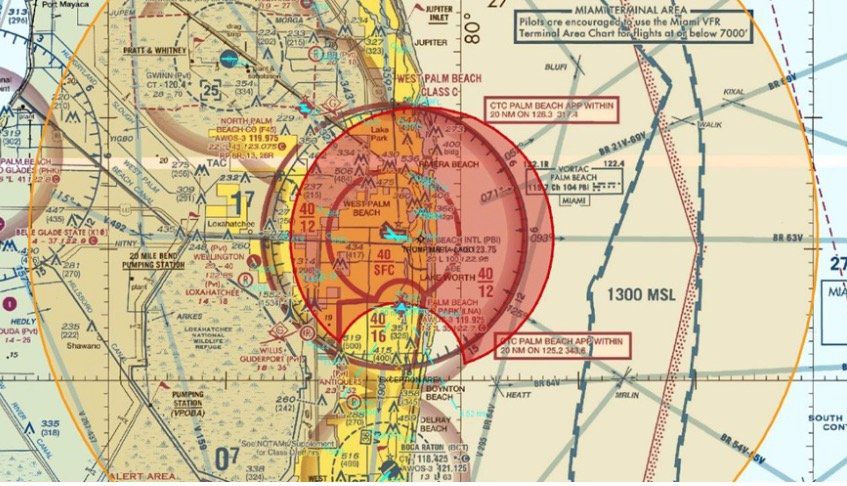 Airport operators and flight schools in the Palm Beach, Florida, area are bracing for long-term economic loss and disruption due to the presidential TFR covering President Trump’s visits to his Mar-a-Lago resort. For the third weekend in a row, the presidential TFR covering Trump’s visit has shut down busy Palm Beach Country/Lantana airport and disrupted flight training and other prohibited general aviation activities. Although local authorities and advocacy groups have approached the Secret Service requesting a cutout or procedural relief, none has been forthcoming.

“Even though the tower at Palm Beach is willing to pick up the traffic and the TSA is willing to put some officers down here, the Secret Service has declined that. I don’t know whether that’s temporarily or permanently,” said Jonathan Miller, who operates Stellar Aviation, the sole FBO on the airport. Lantana is located six miles south of Palm Beach International Airport and about 6.5 miles from the Mar-a-Lago Club, which is on a barrier island off the Florida coast.

The presidential TFRs have typically been two concentric rings, with an inner 10-mile ring and an outer 30-mile ring. All flight operations except scheduled airlines, law enforcement and related security operations are prohibited from the surface to 18,000 feet in the inner core. Limited operations are allowed in the outer core, to include departures and arrivals to area airports and, on an ATC-workload-permitted basis, transits through the area. All aircraft must be on VFR or IFR flight plans and must squawk a discrete transponder code. For aircraft operating into Palm Beach, gateway airports for TSA clearing have been established at Orlando, Dulles, Teterboro and Westchester County, New York.

Miller told AVweb that Lantana, which has five flight schools, has been shut down for the past three weekends and the impact on business has been devastating. He said the airport hosts 20 commercial businesses, about a dozen of which are large operators. Miller described the five flight schools as “very busy.”

In a preliminary economic analysis presented to Palm Beach County, Miller estimated losses for operators for just one weekend to total about $30,000 and his losses for the year could reach $200,000. The second-largest flight school has already relocated and Miller anticipates that others will follow. “We are not large businesses. We are small businesses. Even these short-term losseshave significant impacts to us. Far more concerning is the fact that these short-term losses cannot besustained for subsequent TFRs without leading to the more serious and permanent long-term losses,” Miller said in his report to the county.

Other airports outside the inner core have been less impacted according to checks AVweb made last weekend. However, aircraft displacements have proved disruptive. For example, many private jet operations have moved off Palm Beach International to Boca Raton, 20 miles south of Palm Beach. This has crowded the ramp, leaving less room for light aircraft parking and operations. Weekend flight training from other airports into Pompano Beach, Boca Raton and North Palm Beach Country has also been impacted.

During President Barrack Obama’s terms, airports in Hawaii were similarly impacted when he vacationed there, albeit less frequently than Trump has visited Florida. Airport operators, flight schools and tour businesses were eventually able to work out a security arrangement with the Secret Service to continue flying. Florida operators are trying to do the same, but so far, the Secret Service has been unreceptive. AOPA says it has requested a meeting with the FAA to propose a TFR that would put Lantana in an airspace cutout, similar to what has been done elsewhere. No date for the meeting has been set.