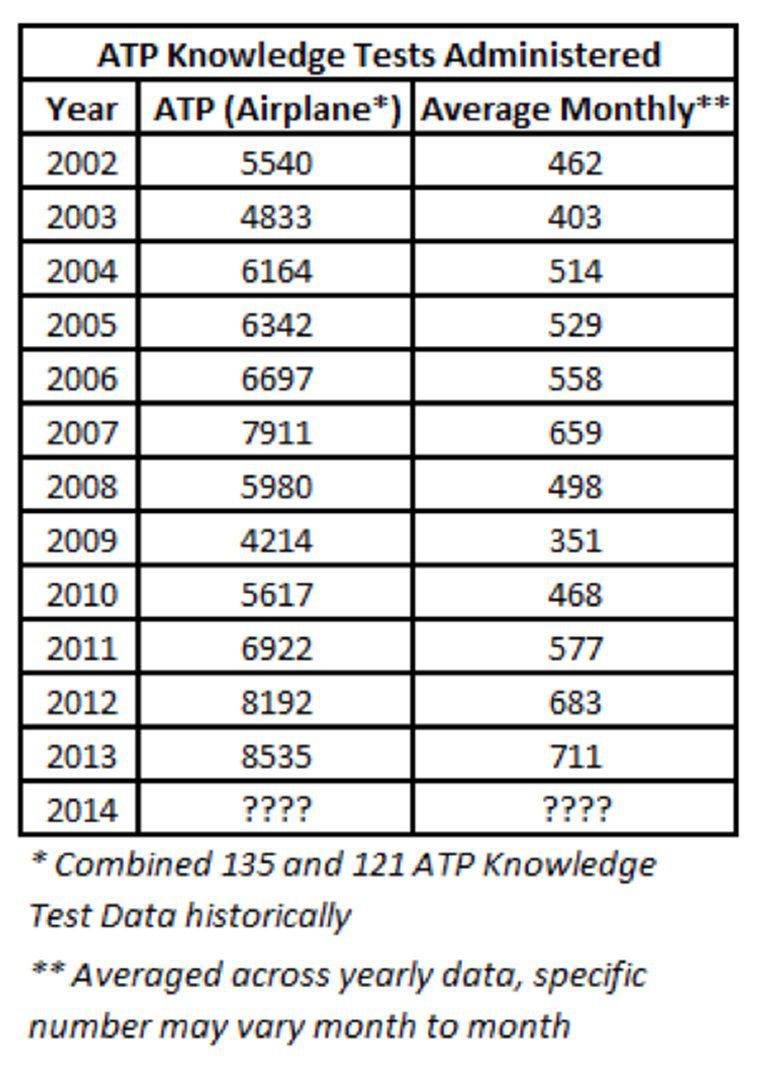 Based on my data sources, since August 1, 2014, we have not administered a single ATP knowledge test that would allow a pilot to then go on to take the ATP multi-engine practical test and become ATP qualified for service in an airline. Yup. None. For two whole months and I expect this trend to continue for a third month.

This is a significant change from historic numbers when we typically saw an average of over 500 knowledge tests given per month (between 2002 and 2013). Why is this important? Because it is not possible to become an ATP pilot without first taking the knowledge test. If we aren’t making new ATP pilots, well, then we simply aren’t making any more pilots capable of being employed to fly airliners.

Many pilots knew this deadline was coming and took the ATP knowledge test ahead of the August 1 date. These pilots have 24 calendar months from the date they took the test to get an ATP practical test done. This is going to represent a big bubble of potential ATP candidates who may become qualified for a practical test, but many of them took the test hoping they could meet the required flight minimums before the knowledge test will expire. As an industry, we have to look at this only as a unique data outlier.

Although I don’t have 2014 numbers of tests yet, I do expect a significant surge of last minute tests taken trying to beat the deadline will be represented in the data in the June/July months of 2014. The reality is once this bubble of previous test takers gets through the certification process, we are going to see an equally large drought bubble in our system.

This change is the result of the changes in regulations for ATP pilot training that became effective on August 1, 2014 after many years of wrangling and negotiating between Congress, special interest groups, the FAA, and the aviation industry as a whole. The how and why are, in my opinion, now irrelevant. What is relevant is what we are going to do now.

Specifically related to the FAA knowledge test for an ATP multi-engine pilot, the changes fundamentally restructured the process by which a pilot becomes qualified to take the ATP knowledge test. Historically, the FAA had two tests, one for Part 121 and one for Part 135 operations that both covered ATP-related questions, with the Part 121 test focusing more on larger and multi-engine aircraft and the Part 135 test focusing more on charter-type flying and smaller aircraft.

The tests are now specifically broken down into multi-engine ATP and single-engine ATP,” a change I agree with. The multi APT however, now has a caveat. To be eligible to take the test, an applicant must have first completed an ATP Certification Training Program (ATP CTP) (More information can be found about this requirement here.) This is now a prerequisite for even sitting down to take an ATP multi-engine knowledge test.

What’s the problem with taking a course before taking the test you might ask? It actually sounds like a pretty good idea on paper. The problem is that as of the writing of this article there are only three approved providers of such a course (Embry-Riddle University, ABX Air Inc (partnered with Sporty’s) and AeroSim, which just announced its program this week. As far as I know, none have started courses yet for students. I know they will do so soon, but even another month or two is going to put us behind even further in our pilot creation process. Let alone the fact that just these providers alone are unlikely to be able to put out the numbers of ATP CTP course graduates great enough to serve our pilot needs.

We have a problem, folks. Our ATP knowledge test process has come to a grinding halt and we are going backwards every month. Somewhere between 500 and 700 qualified candidates who would previously have entered into the potential employment pool for the airlines aren’t doing that now. I’m not going to get into discussion of pilot shortages in this blog. That’s is a long topic with highly polarized and politically motivated positions on either side. This is just simple math. We can’t and aren’t making ATP-qualified pilots. I know that more providers are in the process of approval with the FAA, but even a couple more isn’t going to be enough.

Jason Blair is an active FAA Designated Pilot Examiner and CFI who consults on aviation training and regulatory efforts for general aviation companies.

Join the conversation.
Read others’ comments and add your own.