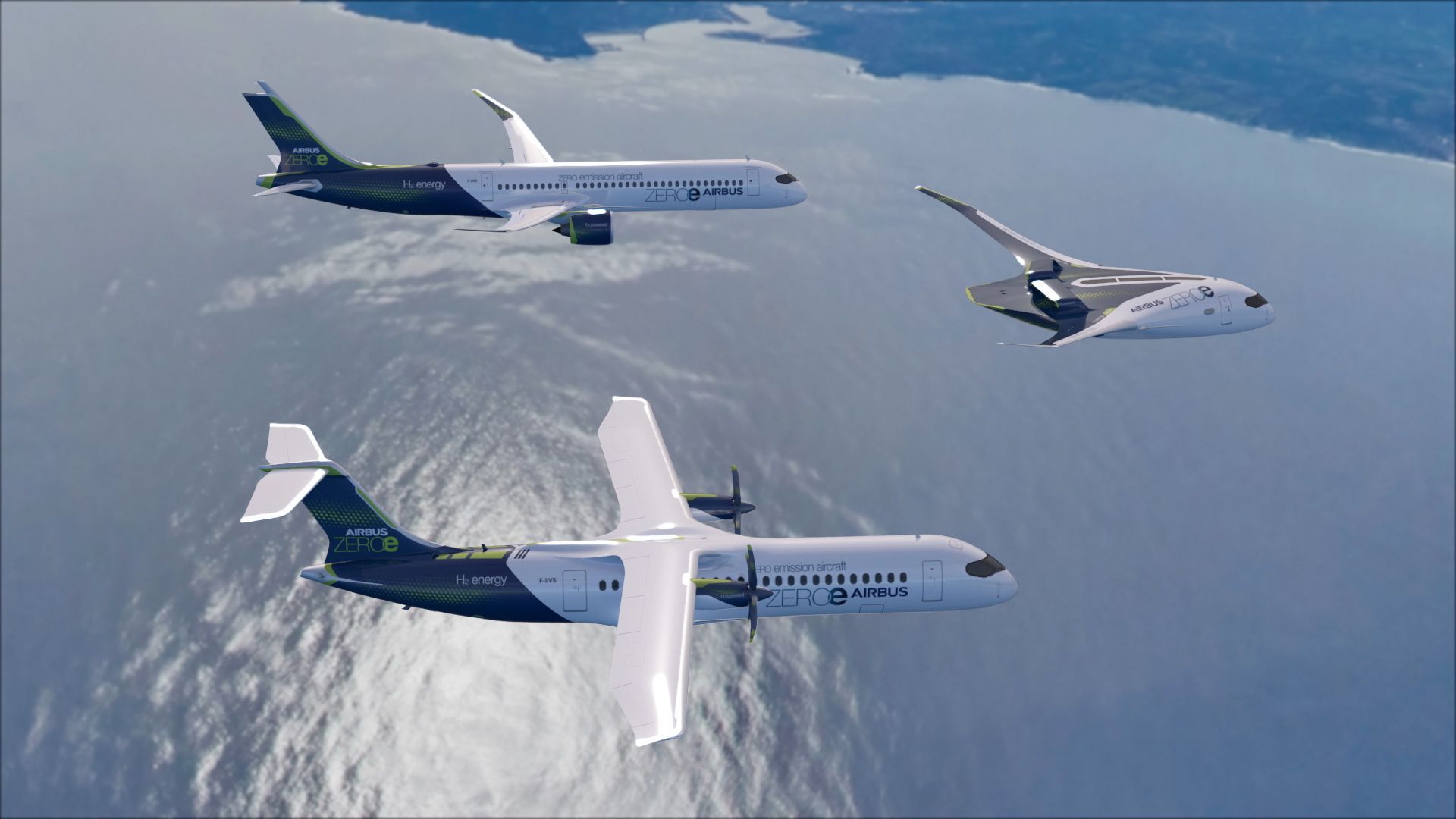 Airbus rolled back the curtain on its three-ship ZEROe program, intended to bring “zero emissions” aircraft to service in just 15 years. At the heart of these three concepts is hydrogen power, and show deployed in a conventional turbofan twin, a turboprop twin, and a futuristic lifting body transport.

“This is a historic moment for the commercial aviation sector as a whole and we intend to play a leading role in the most important transition this industry has ever seen. The concepts we unveil today offer the world a glimpse of our ambition to drive a bold vision for the future of zero-emission flight,” said Guillaume Faury, Airbus CEO. “I strongly believe that the use of hydrogen—both in synthetic fuels and as a primary power source for commercial aircraft—has the potential to significantly reduce aviation’s climate impact.”

According to Airbus, one of the two more conventional designs seating 120-200 passengers and resembling a modern turbofan airliner will have a range of 2,000+ NM and be “capable of operating transcontinentally and powered by a modified gas-turbine engine running on hydrogen, rather than jet fuel, through combustion. The liquid hydrogen will be stored and distributed via tanks located behind the rear pressure bulkhead.” In its presentation, Airbus also noted that hydrogen can be used to create electricity through fuel cells, and that it would use that as a source to power electric motors.

The turboprop-appearing regional transport will carry up to 100 passengers “using a turboprop engine instead of a turbofan and also powered by hydrogen combustion in modified gas-turbine engines, which would be capable of traveling more than 1,000 nautical miles, making it a perfect option for short-haul trips,” according to Airbus.

The futuristic “blended-wing body” proposal can carry up to 200 passengers “with a range similar to that of the turbofan concept. The exceptionally wide fuselage opens up multiple options for hydrogen storage and distribution, and for cabin layout,” says Airbus. Similar to the MAVERIC concept launched earlier this year, the blended-wing design, which is envisioned as a step after the turboprop and turbofan ideas, would use hydrogen fuel cells to power eight electric motors.

“These concepts will help us explore and mature the design and layout of the world’s first climate-neutral, zero-emission commercial aircraft, which we aim to put into service by 2035,” said Faury. “The transition to hydrogen, as the primary power source for these concept planes, will require decisive action from the entire aviation ecosystem. Together with the support from government and industrial partners we can rise up to this challenge to scale-up renewable energy and hydrogen for the sustainable future of the aviation industry.”

Airbus says it will have to determine specific technologies in the very near term. A ground demonstrator of the hydrogen-fueled engines is expected next year, with flight tests starting in 2023. The company admits that infrastructure will be a challenge, and expects contributions from government entities to help pick up the slack.