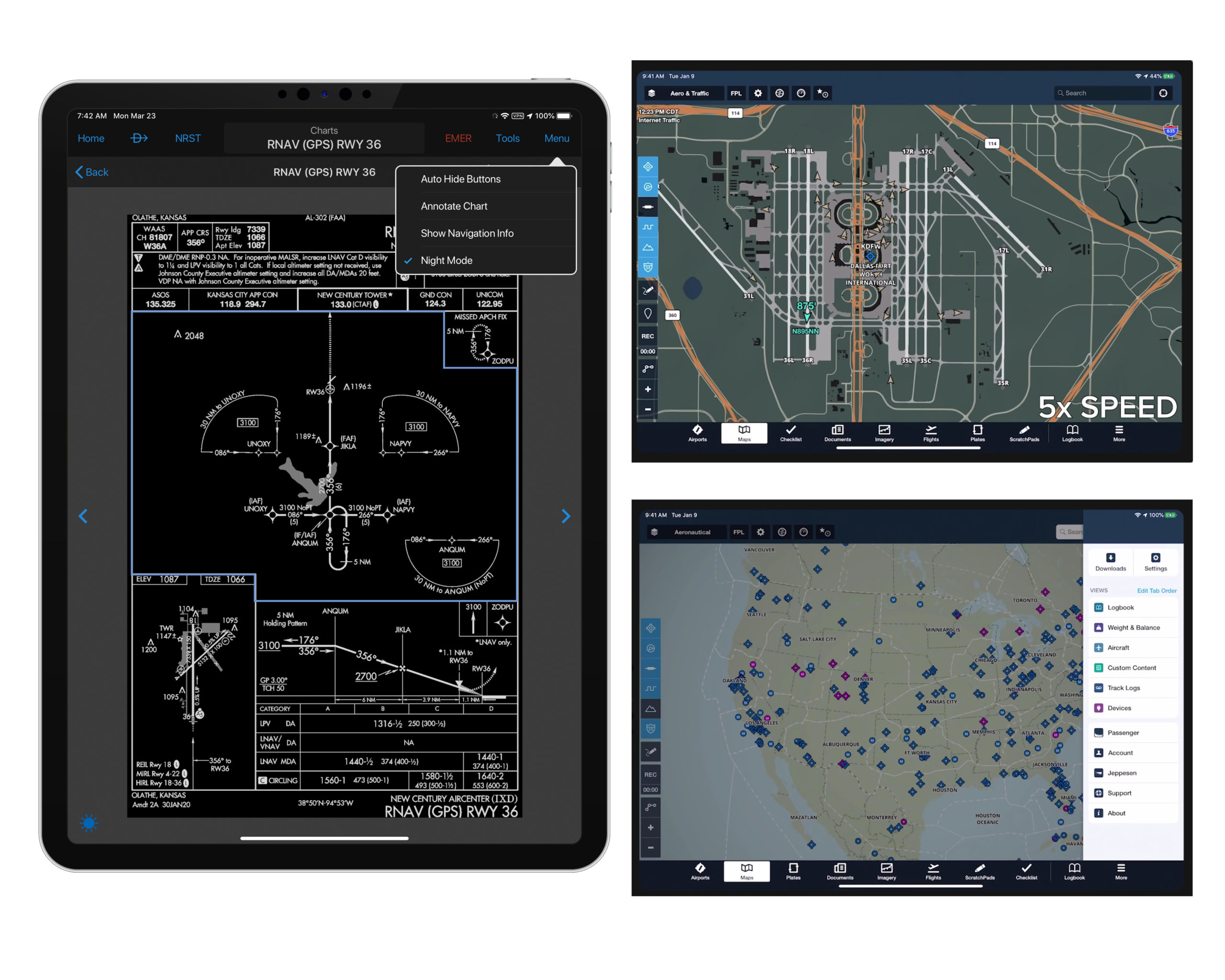 ForeFlight and Garmin have released upgrades to their electronic flight bag (EFB) apps over the last couple of days that, particularly in the case of the ForeFlight product, represent seemingly minor but functionally significant changes.

ForeFlight’s latest update marks an agreement with FlightAware to provide real-time traffic overlays on the ground, using an internet connection. Called Internet Traffic, the feature places FlightAware-sourced aircraft data onto the ForeFlight maps. According to the company, you can “use it to plan your next flight more intelligently by gauging airport activity like active arrivals and runways. See how ATC is vectoring traffic around active weather systems and plan accordingly. Or take a tour of distant skies right from your couch.” FlightAware has also added Scheduled Flight Search, which allows you to search for filed flight plans for aircraft by N-number right in the app.

ForeFlight in this update also enabled full multitasking support in the Apple iOS, made significant changes to the user interface, and tweaked the iPhone version of the software to more closely match the interface of the iPad. (Multitasking is only supported on the iPad.) One significant update is the functionality of the More tab along the bottom. This menu, which allows access to second-level functions such as Logbook, Track Log and Devices, now slides out from the right side of the screen, leaving the bulk of the main display still visible. In addition, other functions found in the More menu now open as floating windows. ForeFlight has also updated the function of several menus, including the Airports page, for better readability, especially on the iPhone.

Garmin’s updates to the Pilot app include a new Night Mode for the approach charts, which is really helpful for night flights, where the previous presentation could be too bright. Night Mode inverts the colors on both the Garmin FliteCharts or Jeppesen plates, much as the resident night mode does on the latest versions of the Apple iOS. Other tweaks include showing ground elevation on the “radial menu,” which is what you get when you tap anywhere on the map screen. Now the center portion of the menu shows both bearing and distance to that point but also the elevation of the ground at that point. Garmin has also updated the document viewer features, making them sync properly across all Apple mobile devices and customizable by color for easy reference. Pilot users who file their flight plans via FltPlan.com can print the nav log and weight-and-balance sheets via AirPrint right from the app. Finally, Garmin has updated the logbook functions, now showing a map with “pins” to reveal which airports the pilot has visited, and refined the presentation of lightning on the map page.

Both the newest ForeFlight (version 12.4) and Garmin’s latest version of Pilot (10.1.1) are available now for the Apple iOS.

ForeFlight is available only for the Apple iOS and has three subscription levels; the $99.99/year Basic includes VFR and IFR charts, flight planning, aviation weather and traffic, and logbook (with online sync/backup); the $199.95 Pro Plus adds geo-referenced plates, profile view, turbulence and icing layers, and synthetic vision; and the $299.99/year Performance Plus adds advanced flight planning, pre-departure clearance, and Airport 3D view. ForeFlight connects to all the popular transponders and outboard modules for ADS-B In data as well as external attitude information.

Garmin’s Pilot starts at $79.99/year for the Standard, which includes IFR and VFR en route charts, aviation weather with radar, satellite and lightning overlays as well as textual data. The Premium upgrade is another $79.99 a year and adds FliteCharts (IFR procedures), SafeTaxi, terrain alerts, and aviation weather and traffic. The Premium can be upgraded to use Jeppesen charts at additional cost. Pilot is available for iOS and Android operating systems, but only interfaces with Garmin Connext-compatible external devices for GPS position, weather, and traffic via ADS-B.

See the videos below for more detail on these updates.