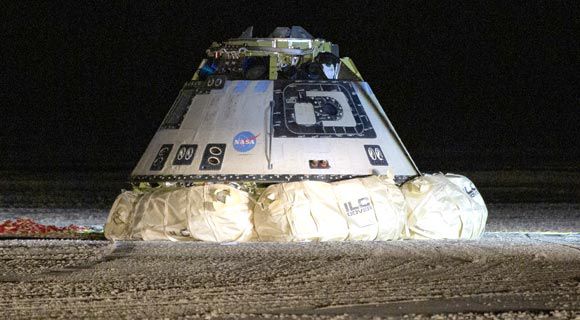 Boeing’s CST-100 Starliner crew capsule made history on Sunday but this time it was for a success. The empty crew capsule failed to make it to its intended orbit following the spacecraft’s first uncrewed test launch on Friday but after doing some math engineers were able to bring it to a soft landing on the desert of the White Sands Missile Range in New Mexico. It was the first time a manned capsule had been recovered on land in the U.S. “Watching the landing was a thing of beauty today,” NASA Administrator Jim Bridenstine told Boeing and NASA flight controllers at Mission Control in Houston, according to NASA commentators.

The capsule spent a couple of days orbiting the planet after a timing error put it at the wrong altitude. It was supposed to dock at the International Space Station for a week and then return empty on the all-important shakedown. The capsule was launched on an Atlas V rocket at 6:36 a.m. EST from Space Launch Complex 41 at Cape Canaveral Air Force Station in Florida.

“When the spacecraft separated from the launch vehicle, we did not get the orbital insertion burn that we were hoping for,” said Jim Bridenstine on Friday. “It appears as though the mission elapsed timing system had an error in it and that anomaly resulted in the vehicle believing that the time was different than it actually was.” Bridenstine highlighted that the issue was one of automation, suggesting that a crew would likely have been able to correct the issue in time to continue the mission as planned and that even if they had not, they would not have been in danger.