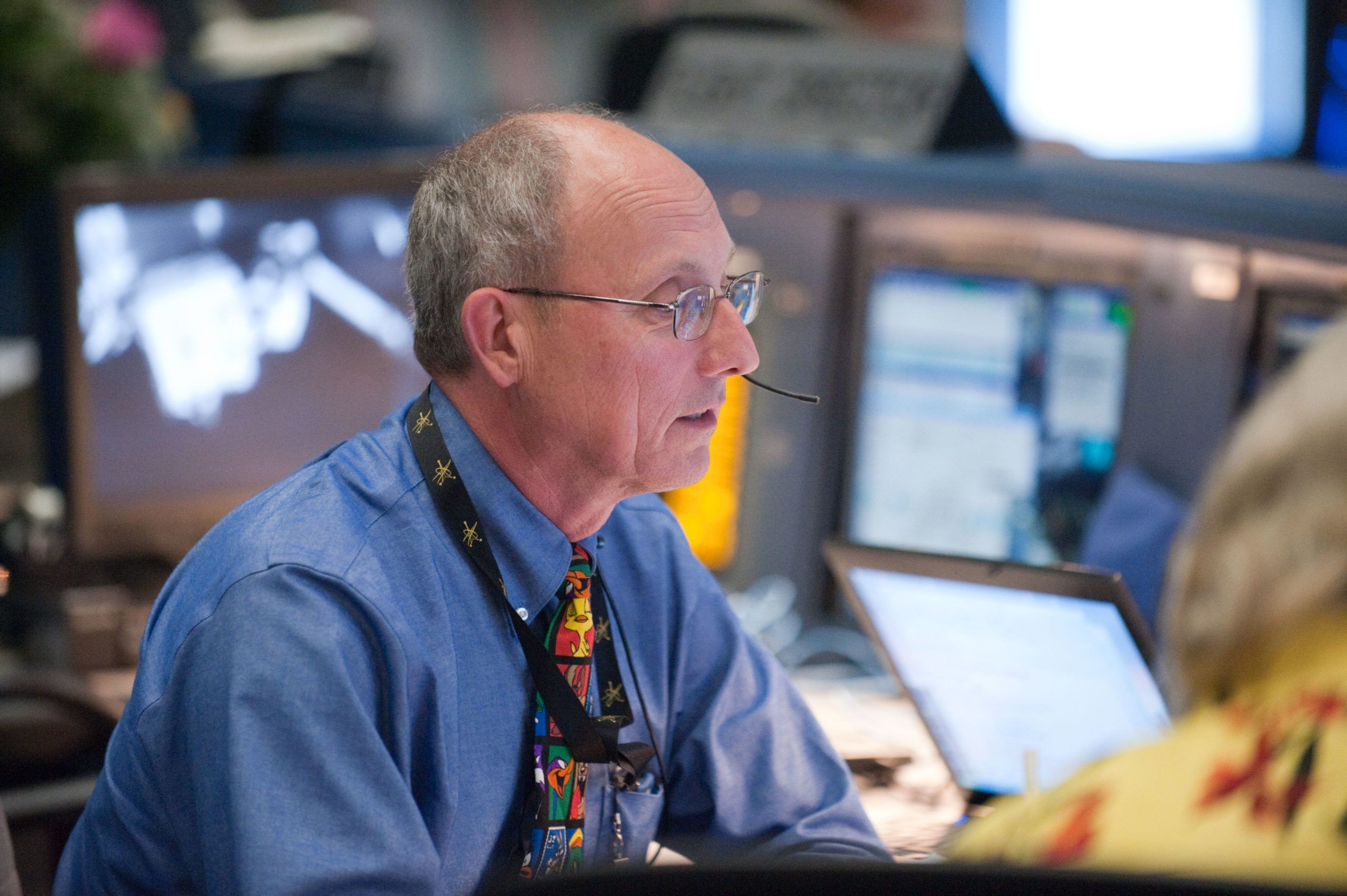 Paul Dye, retired NASA flight director, describes what it takes to operate the most complex flying machine ever built.

It was not just another day in the life of NASA flight director Paul Dye, who was sitting in the exalted center seat at mission control once occupied by those titans of American spaceflight, Chris Kraft and Gene Kranz. This day would start with an emergency.

A loss-of-pressure alarm had gone off in the International Space Station. The Space Shuttle Atlantis was docked, and the immediate concern was how to localize and find the source of the problem in the huge orbiting complex. While the symptom was obvious—onboard atmosphere leaking into the vacuum of space—the diagnosis could be a faulty valve, pesky plumbing, or a puncture from a micro-meteorite. The loss of pressure could have been on the space station side, the shuttle side, or the airlock in between.

Dye and his team of system specialists, flight controllers and communicators went to work. The problem-solving could involve anything from sending the shuttle crew back to Atlantis to close up hatches and isolate, taking a deep dive into the orbiter’s entrails on the unoccupied bottom deck, even undocking and heading home early. A potential abort presented another set of problems. Where might they find a suitable runway?

While various scenarios were being analyzed, the clock was ticking and the onboard atmosphere kept “feeding the leak.” Crew safety and accomplishing the mission were the ironclad goals—and of the two, the crew came first. It was passed down like the tablets, ever since NASA’s first sub-orbital lobs in the Mercury program, ever since Flight Director Gene Kranz uttered those famous words “failure is not an option” during Apollo 13’s abortive 1970 mission, when a spark ignited a liquid oxygen tank during a “cryo-stir” and blew the side off the service module.

Now, Dye’s team detected the leak somewhere on the Shuttle—and he’d have to come up with a plan. In the back of everyone’s mind was the potential loss of the orbiter, and marooning the crew aboard the space station. Problem: This was STS-135, the final mission of America’s highly successful—but hardly trouble free—space transportation system. There was no sistership waiting on the pad at Kennedy Space Center prepped and ready to bring the crew home. They’d have to shift as much consumable payload from shuttle to station, move the crew over, close the airlock and abandon Atlantis to its own fiery re-entry and breakup somewhere over the Pacific. Then, they’d have to devise a series of Soyuz flights with America’s Russian partners to slowly bring the crew home. It would be very expensive, and take more than a year.

If you haven’t guessed by now, the preceding anecdote was nothing more than a very life-like drill, every bit akin to having your CFI pull a circuit breaker to disable your landing gear—˙just to watch you sweat. But to Dye and company, the simulation was very real, and added texture to the NASA axiom, “fly like you train.”

This gripping vignette opens Paul Dye’s terrific memoir marking his 34 years in NASA’s mission control at the Johnson Space Center. Paul started his career as a co-op student trainee—driving to his new gig in a hot and steamy Houston aboard a Yamaha motorcycle from his boyhood home in Minnesota. He’d spend the next three decades climbing the steep ladder of NASA’s engineering hierarchy to become the grand maestro conducting the symphony of human space flight. It took a lot of people and a lot of systems—and, lest we forget, a lot of money—to get the instruments to sound just right, or in NASA-speak, to achieve the “nominal.”

Paul’s book, Shuttle, Houston is a fascinating history of how America built and operated the most complex machine ever devised by man. A nuclear-powered submarine might come close, but the medium of the deep ocean is more forgiving, it turns out, than low Earth orbit. For the delta-winged spaceplane to escape Earth’s gravity, NASA had to thread the needle between fantastic ascent speeds up to Mach 25, negotiate crushing aerodynamic loads, fight incomprehensible pressures, and deal with wild swings between heat and cold—all so astronauts and payload specialists could work in shirt sleeves in zero G. Then this 240,000- pound machine would have to brave a fiery re-entry to an unpowered dead-stick landing, while Dye and company teed up the next shuttle mission to keep the program on pace. Toss in two loss-of-orbiter disasters with Challenger and Columbia—one on ascent, one on entry—and you have the makings of a gripping tale of humanity clinging to the perilous edge of scientific exploration. It was not for the faint of heart. When the first shuttle commander, John Young, took Columbia into orbit with crewmate/pilot Robert Crippen on April 12, 1981, he described the prescribed abort-to-orbit procedure from an altitude of 400,000 feet as nothing less than “ten miracles followed by an Act of God.”

Spoiler alert: This book review is nothing if not biased. Paul is an experienced builder of experimental aircraft. He was a columnist at our sister magazine KITPLANES, and slid elegantly into the editor-in-chief’s chair five years ago upon his retirement from NASA. He’s now KITPLANES’ editor-at-large, and we’re most fortunate to know Paul as colleague and friend. This fiercely intelligent editor is also an accomplished aircraft builder. He’s got five experimental aircraft in the hangar at his Dayton, Nevada airpark home and he and his wife, Louise, keep them routinely exercised. His SubSonex jet won an “Outstanding Workmanship” award at AirVenture last year, and was the subject of a seven-part KITPLANES series if you ever feel like delving into the grit and grist of planning, building, testing and flying your own airplane.

Shuttle, Houston is Paul’s effort to capture the details and the nuance associated with building, launching and maintaining the finely intricate and boldly robust machine called “the Shuttle.” It was designed to get big payloads into orbit, and, significantly, return big payloads to Earth. Like the human body, the Shuttle consisted of multiple interconnected “systems” that came together to function often with near perfection. Emphasis on “near:” We all knew where we were when we learned Challenger had broken up on ascent on January 28, 1986. A faulty O-ring in the ship’s solid rocket booster caused gas to escape, igniting the ship’s external fuel tank. The Columbia re-entry breakup on February 1, 2003 was caused by loose insulation flying off the ship’s external tank on ascent, colliding with the leading edge of Columbia’s wing and compromising her heat protection. The first signal Columbia might be in trouble came with an “off-nominal” tire pressure reading in the shuttle’s left main gear, a subtlety that speaks loudly to the tyranny of minutia that could rise up and kill these magnificent machines.

Paul faces up to NASA’s failures with eyes wide open. Two loss-of-orbiter mishaps out of 135 missions is not a great record.

“It was culture that got us into trouble—culture, success, and the pressure to perform. We fell into the trap of success. With many diverse and complex missions launched in a short period of time, we felt that we knew what we were doing. We felt comfortable because nothing terrible had happened. But what we didn’t realize was that the terrible thing just hadn’t happened….yet.”

Paul shakes off these failures by stating that since the beginning of manned flight, big initiatives carried big, inescapable risks. Paul structures this rich history around the positions “on console” during a typical mission, so you get a feel for not just the roles, but the spacecraft systems the individuals manning those positions are responsible for. Teams were divided into Systems, Trajectory and Operations subsets—everything from flight dynamics to guidance systems to propellants to payloads were overseen by studious engineers who all reported to “Flight,” who had at his or her right hand the spacecraft communicator or CAPCOMM. They all pulled on the same oar according to a very strict timeline that allowed the mission to be faithfully executed.

Getting all these parts and pieces to work smoothly required the leadership talents of the brightest Fortune 500 CEO, or Eisenhower on D-Day. And let’s not forget that while the mission in front of them was getting all the attention, there were a half dozen missions marching in step right behind.

Paul developed a set of useful aphorisms to describe the work that go well beyond “Plan the Flight. And Fly the Plan.” Here are the plums:

If it’s exciting, you’ve done something wrong. Mission Control’s unofficial motto was “Making the most exciting things in the world as boring as possible for over fifty years.”

If you’re not ahead, you’re behind. A useful corollary was, “if you’re not early you’re already late.”

The first answer is always wrong, interpreted as…“if you take a little time, look around, see what else is happening, and put what you see in context, you almost always find a better answer.”

Try to encourage fast thinking and slow action, followed by… “never make the right decision too soon. Unless it is something actually exploding you almost always have a little time to figure out what is happening, what the effects will be on the vehicle (and the mission), and what the potential actions are that can fix (or mitigate) the problem.”

There are always alternatives (maybe not good ones), followed by… “the alternative might be so stupid as to defy all logic—but that just proves your original idea probably wasn’t that bad, and you can proceed with confidence.”

Trust your data, but never believe it, followed by… “the first rule of trusting your data was to never trust your data, at least not a single data point. The trick was understanding how instrumentation could lie to you.”

Then, there’s the flip side…

In God we trust—all others must bring data, followed by… “even though we were always asking ourselves how the data was fooling us, the fact of the matter was that data was king. In any argument or problem-solving session, the person with good, hard, solid data was going to win over someone who just was speculating.”

There are a lot more take-aways in Shuttle, Houston. Anyone who is interested in flying generally, the history of flight, or managing massive technical projects, will enjoy this read.