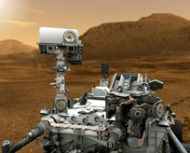 Curiosity took second place in AVweb‘s online poll, attracting just over half the votes given to Felix Baumgartner and the Red Bull Stratos Team. The other nominees were Lockheed Martin’s unmanned aerial cargo system, the NASA/JPL Dawn Project team, the Gulfstream G650, and the U.S. Air Force MC-12 Project Liberty Team. The trophy will be formally presented at the annual Robert J. Collier Trophy Dinner on May 9, in Arlington, Va.; information about tickets for the event can be found at www.naa.aero.